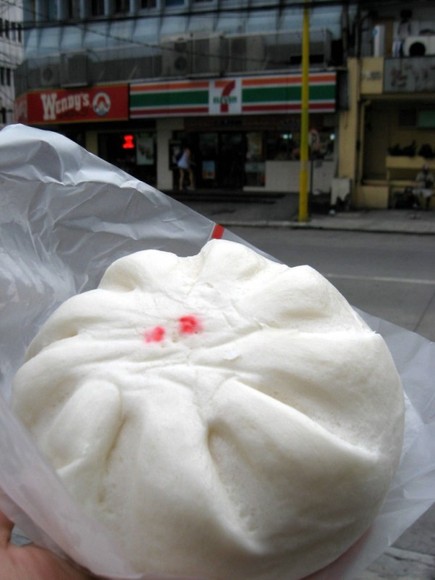 On our second day in Manila, we took a day trip to Tagatay—home of the Taal Volcano. Taal Volcano is active (eee!) and has a large crater lake in the middle. It’s located 1.5 to 3 hours from Manila depending on which mode of transportation one takes. We took a semi-public bus, so it took 2 hours.

The Astronomer started his day with an “adobo” steamed bun from 7-11. Even though he was a fan, all I could do was shake my head and frown in disapproval. I hope that tourists visiting America don’t eat at 7-11. Not even for a Slurpee. 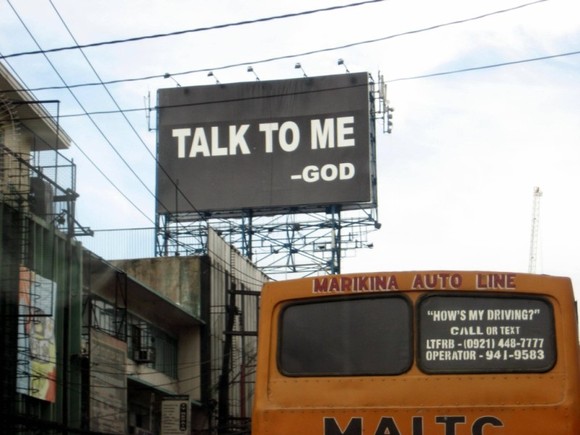 Here’s a billboard we saw on our cab ride from the hotel to the bus station to catch a ride to Tagatay. The Philippines favor the type of “cool”/”in your face” Christianity that my high school classmates really dug. WWJD? He would most definitely advertise on a billboard. 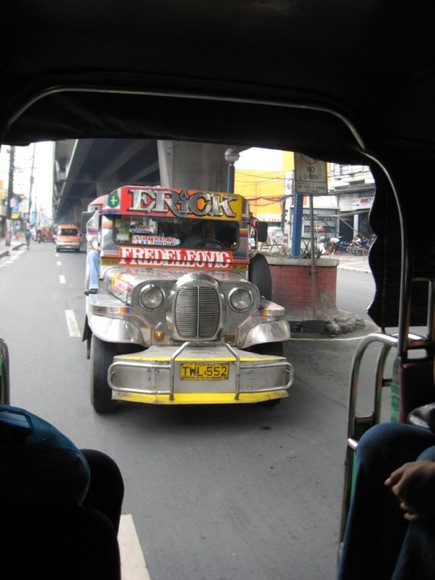 The unhelpful taxi driver dropped us off at the wrong bus station. Luckily, we met a sweet local who took us under her wing (and eventually to the right one). Thank goodness she was around! We were all really stoked to hop aboard a jeepney—“the most popular means of public transportation in the Philippines. They were originally made from US military jeeps left over from World War II and are well known for their flamboyant decoration and crowded seating.” Photo by Nina. 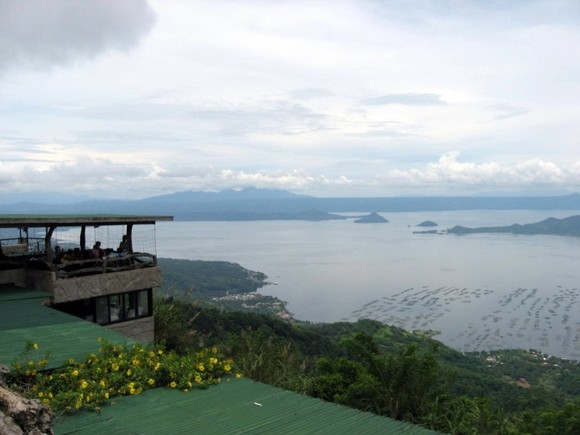 Here’s a view of Lake Taal from Leslie’s Restaurant (Aguinaldo Highway) in Tagatay where we had lunch. This picture by James Deakin captures the gorgeousness of the surroundings much better. 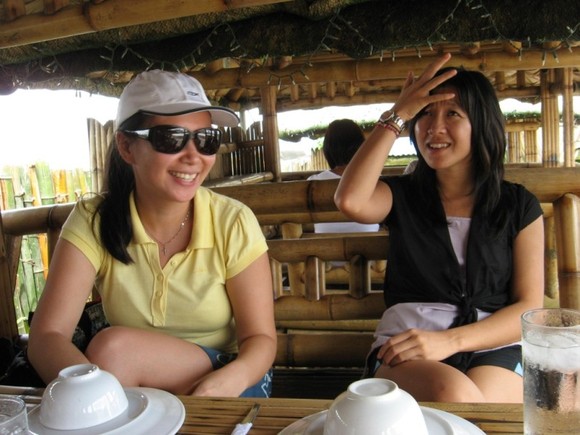 Nina and Cathy. So much personality in one happy snap. 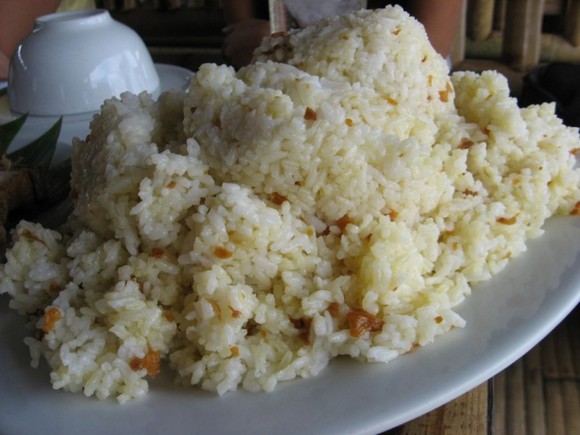 Lunch started off with a mountain of garlic rice. A meal in the Philippines just wouldn’t be complete without heaps of garlic rice. By the way, this is a “family” size order (210 PP). 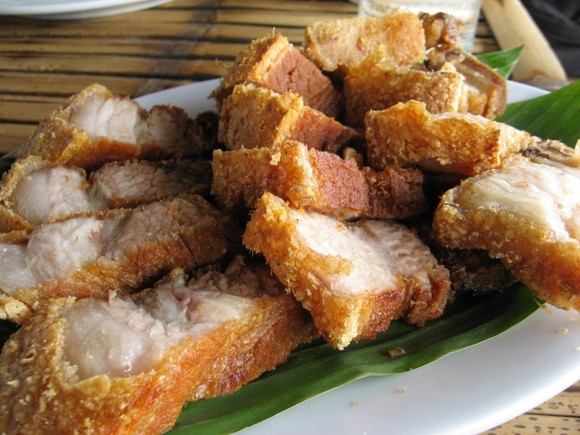 For all fans of pork, this one’s for you! Lechon (299 PP) is the Spanish word for suckling pig. In the Philippines, it connotes a whole roasted pig. The process of lechón involves the whole pig/piglet slowly roasted over charcoal. The result of this slow cooking is an amazingly crispy crust/skin and tender lovely innards.

The lechon was served with a thick, sweet sauce made of liver, apple cider vinegar, brown sugar, salt and pepper. The sauce paired amazingly well with the pork. Mmm! 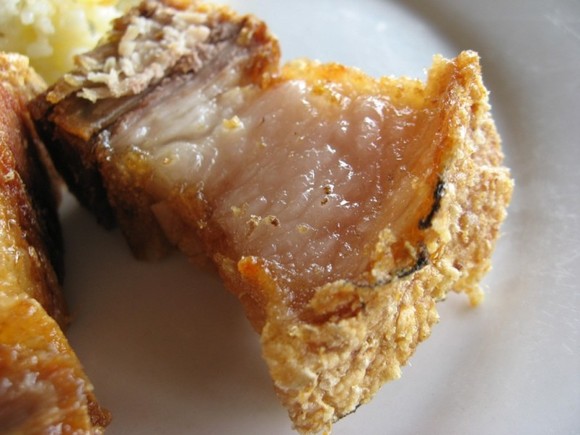 Here’s a close-up of the goodness. OMG. So very decadent. We each had three pieces and it was plenty. 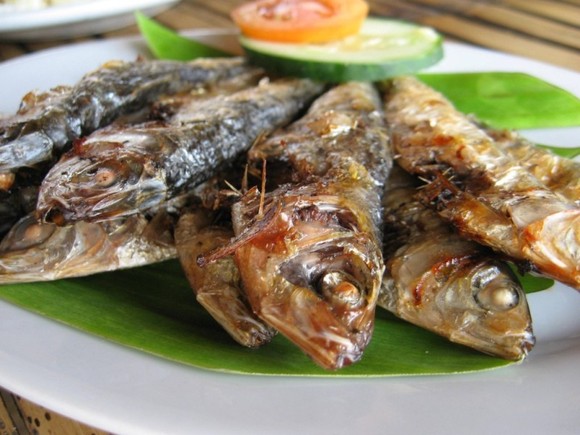 Grilled Tawilis (210 PP). These freshwater sardines were simply grilled without adornments. Too many bones and not enough flavor—not a hit with diners. 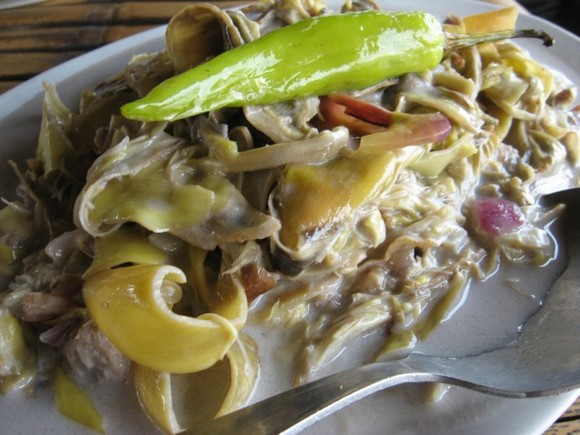 Banana blossom in coconut milk. The texture of this fruit/vegetable is very much like that of artichoke hearts, while the coconut sauce is slightly sweet. Here’s a recipe I found on Lafang: a Pinoy food blog. 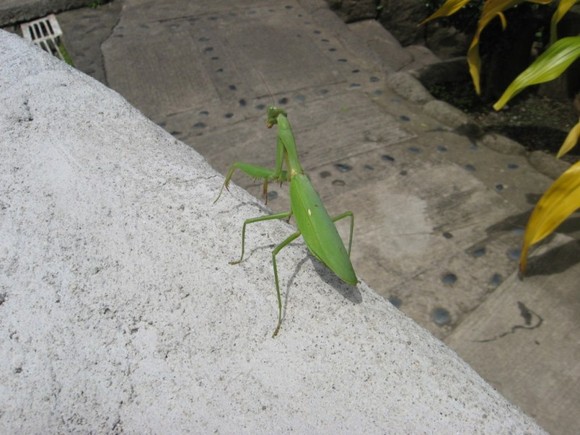 We met this little guy at Leslie’s. Looks like a leaf, no? Camouflage is cool. 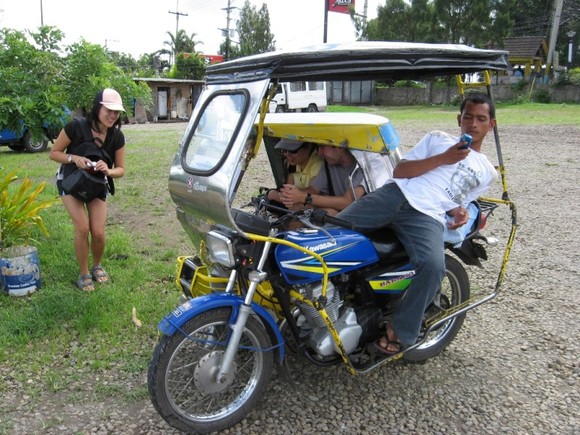 After lunch we hopped aboard a tricycle and zoomed down to the waterfront. The Astronomer and Nina squeezed into the attachment, while Cathy and I rode behind the driver. It was a tight, but acceptable squeeze. Or so I thought. 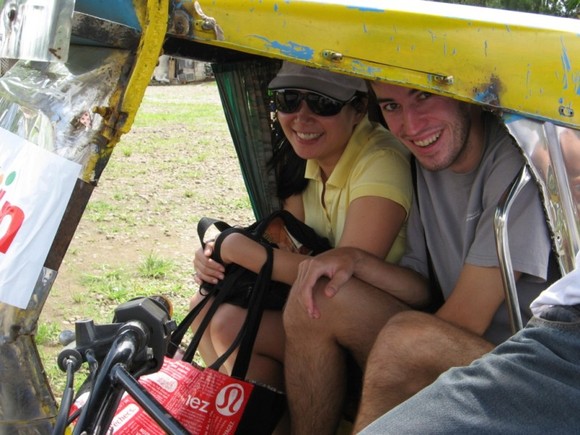 A close up of Nina and The Astronomer. The Astronomer’s back hurt like mad at the end of this ride. On the ride back up the mountain, we switched places. I rather liked riding in the attachment. 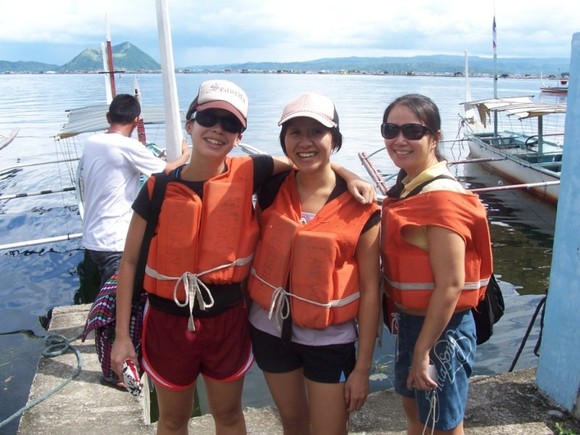 Ready for some volcano action. I can’t believe they made us wear life jackets. In Vietnam, there would have been no such nonsense. 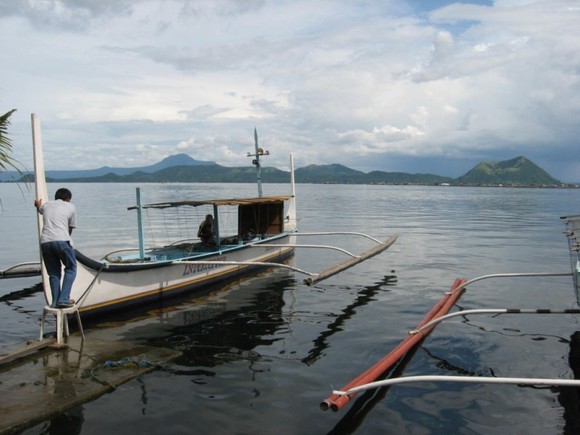 The balancers on both sides of the slender boat really saved us, especially when it started raining on our trip back. 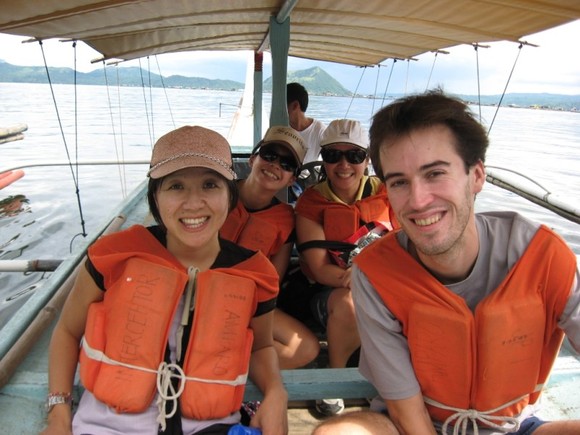 The crew cruising out to the volcano. 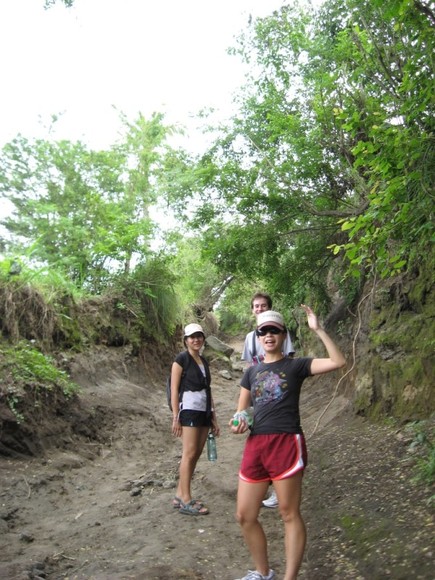 We could have hired some ponies to take us to the top of the Taal Volcano, but we thought the 1,700 meter hike was totally do-able. North Americans are built tough. Here I am waving adios to the ponies. 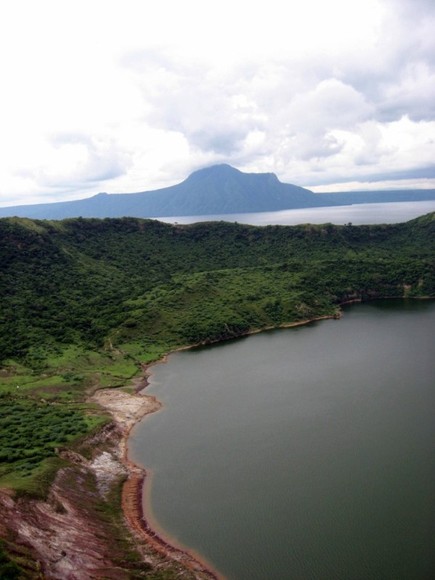 The lake inside the crater. 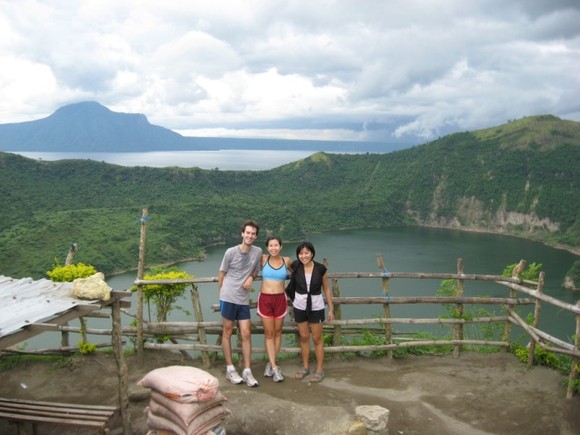 Nina took this picture of The Astronomer, Cathy and me from the shaky lookout tower. 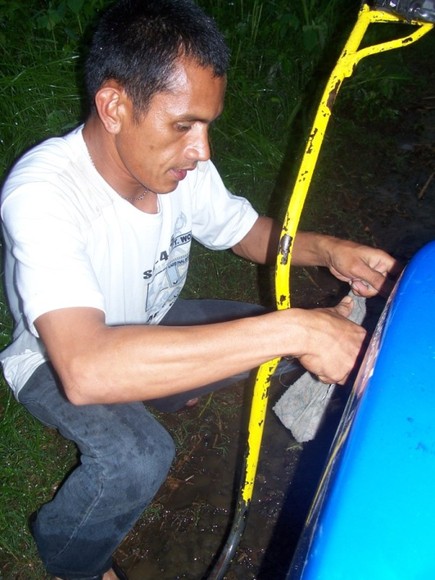 After we hiked down the volcano, we boarded the boat and sailed back to the shores of Lake Taal. Then we boarded our tricycle, putted up the hill and caught a bus back to Manila. Here’s our tricycle driver “reinforcing” the attachment to the motorbike using an old towel. I LOVE Asia. 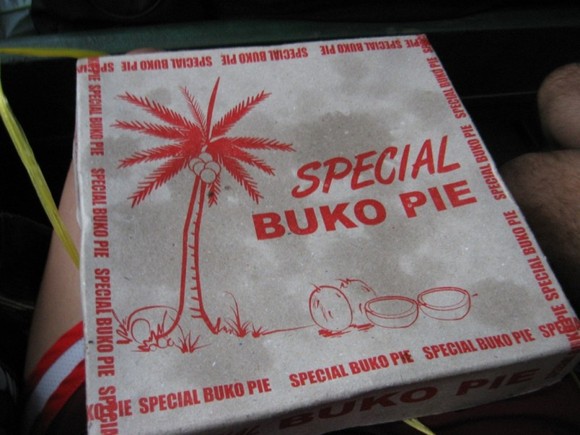 Prior to take off, a buko pie vendor boarded the bus to hawk his goods. No one had any idea what a buko pie was, but we took a chance because it sounded mighty intriguing. 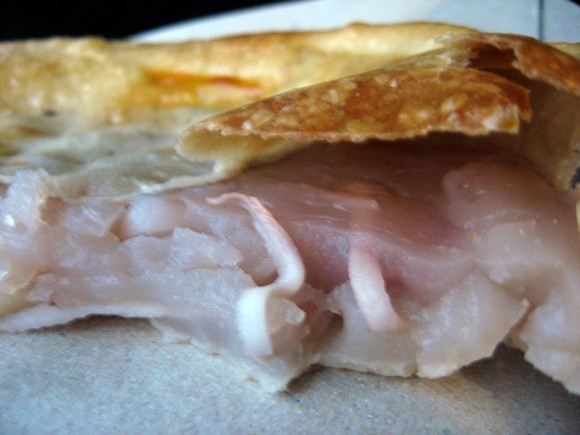 It turned out that buko means coconut. The coconut meat pie was one-dimensionally sweet, a little soggy and probably would’ve tasted loads better fresh. No regrets here though. When it comes to street food, you’ve got to try the rest to find the best.

9 thoughts on “A Day in Tagaytay”