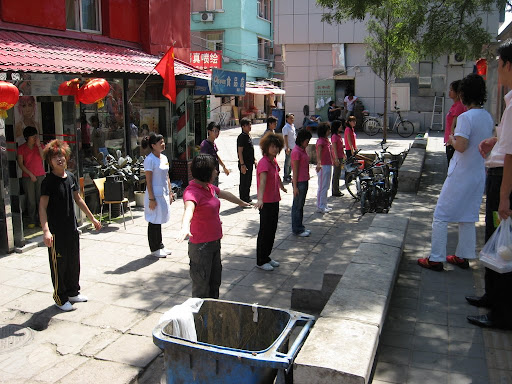 My last full day in Beijing started with a warm soy milk and an egg McMao sandwich from the bread outlet on Third Ring Road. The bread place is located a few doors down from a hair salon. Every morning during our stay in Beijing, The Astronomer and I watched as the hair stylists performed their daily hand/eye/aerobic exercises. Whereas the women in Saigon are full of energy when they work out, these Beijingers were an unenthusiastic bunch. 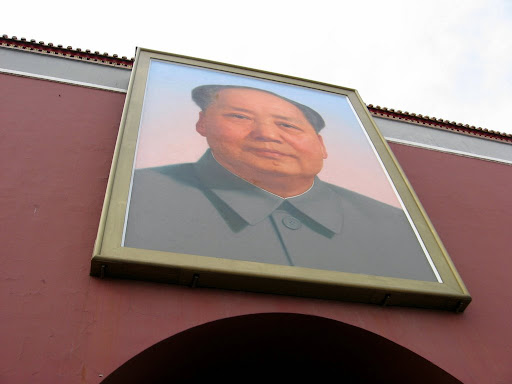 The Forbidden Citywas the Chinese imperial palace from the mid-Ming Dynasty to the end of the Qing Dynasty. For almost five centuries, it served as the home of the Emperor and his household, as well as the ceremonial and political centre of Chinese government. Built from 1406 to 1420, the complex consists of 980 surviving buildings with 8,707 bays of rooms and covers 720,000 square metres. The palace complex exemplifies traditional Chinese palatial architecture, and has influenced cultural and architectural developments in East Asia and elsewhere. 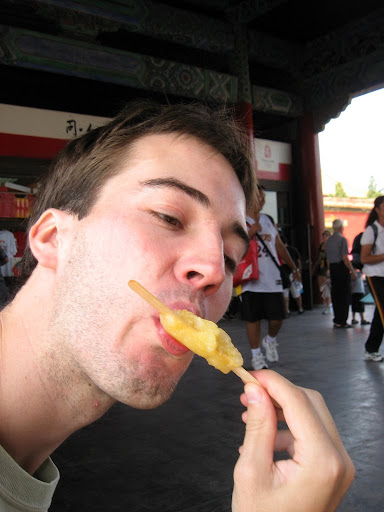 The Astronomer and I enjoyed the Forbidden City, but weren’t blown away by it. It seems that after a year of living in Asia, we’ve become desensitized to this type of architecture. Granted, the Chinese invented this style of architecture, but at the end of the day, it was “same, same” in our book. The Forbidden City was scorching when we visited, so this peach icy popcicle (3 RMB) was crucial to our survival. 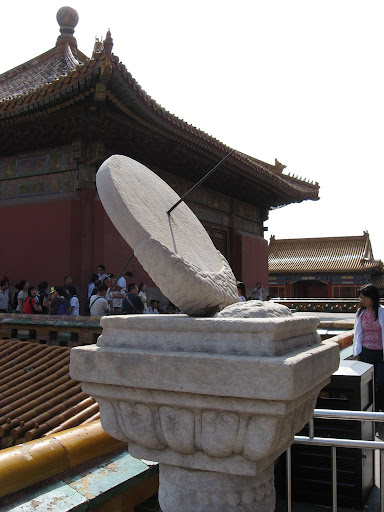 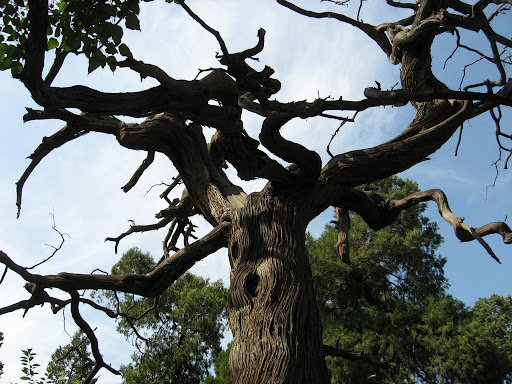 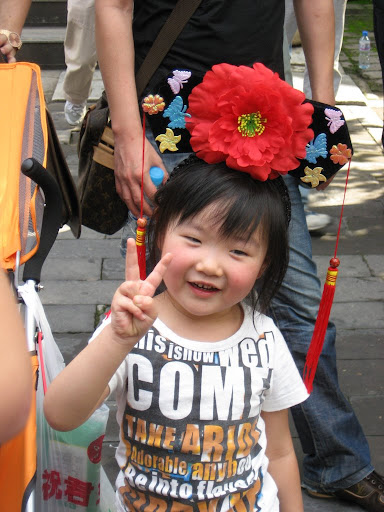 Local tourists were keen on buying these faux royal head dresses for their little girls. They reminded me of the characters from the Chinese movies—the ones that come in sets of 50 VHS tapes—that my grandmother loves with all of her heart.

After a couple of hours exploring the Forbidden City, we shopped for Olympic merchandise at the flagship store nearby. While I think Black Friday is a blast, the crowds here were much too much! We picked up a few items for our loved ones back home and then headed down to the basement food court for dinner. 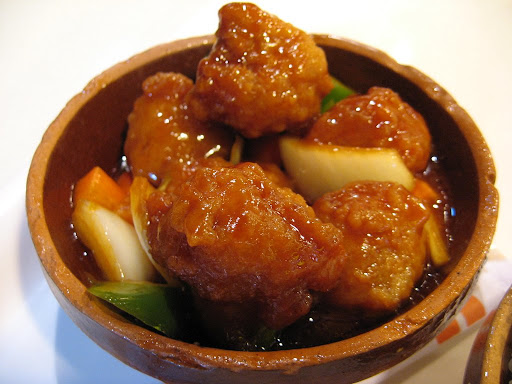 After two weeks of bravely holding out, The Astronomer finally gave in and chose the most sesame chicken-like item he could find. The texture of the sauce and chicken pieces were spot-on, but the flavor lacked the sweet and sticky punch that’s characteristic of Chinese-American hits like sesame chicken, General Tso’s chicken and orange chicken. It was also kinda cold. Unforgivable. 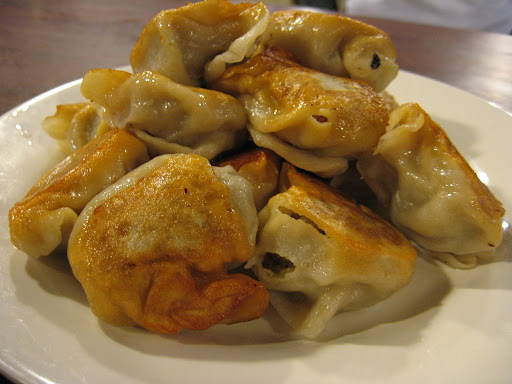 The pan fried dumplings were excellent, except that The Astronomer chose the celery and pork ones (and everyone knows celery is sort of inferior). 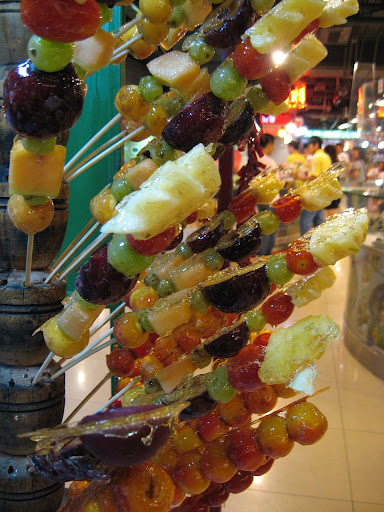 I couldn’t leave Beijing without indulging in one more stick of candied fruit. This time around I chose a mixed-fruit variety with pineapples, tomatoes (!), grapes, plums and crab apples. To encourage more Americas to consume fresh fruit, I highly advocate candy coating. 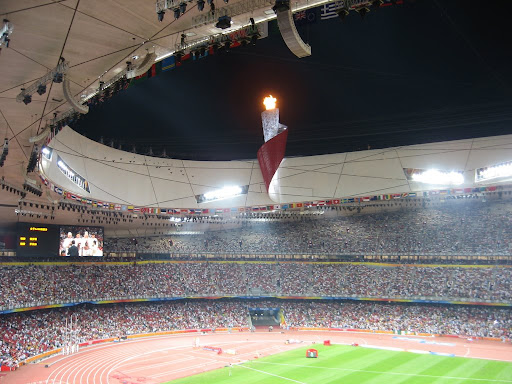 After our food court dinner, The Astronomer and I rushed to the Bird’s Nest for the last evening of Track and Field action. This time around, we sat on the stretch of track facing the torch and the finish line. We were also seated next to a bunch of Americans so it was good times, especially when the women’s and men’s 4×400 teams took home gold. The group of Finns behind us were the most enthusiastic javelin fans we’d ever met. 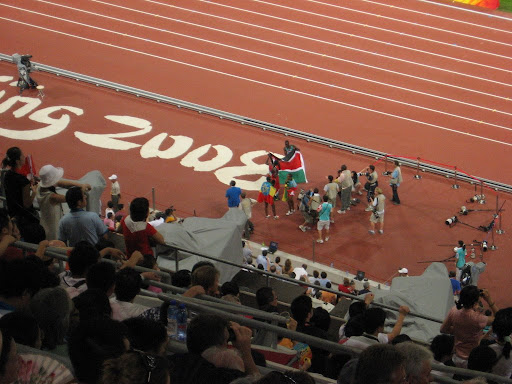 Victorious Kenyan and Ethiopian runners after the 5K. It’s too bad that track stars are only elevated to super-star status once every four years. 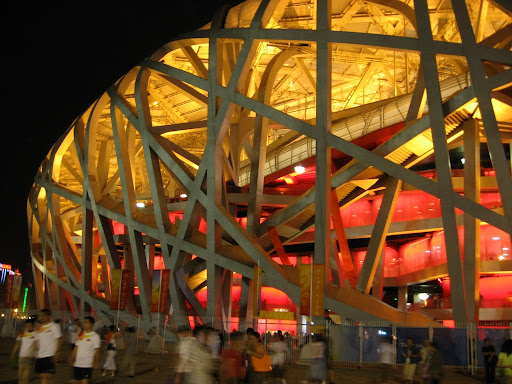 Goodbye, Bird’s Nest. You are a damn sweet piece of architecture. Don’t get rusty while I’m gone.

*The Fuwa are the mascots of the 2008 Summer Olympics in Beijing. The designs were created by Han Meilin, a famous Chinese artist. There are five fuwa: Beibei, Jingjing, Huanhuan, Yingying, and Nini. Together, the names form the sentence “Běijīng huānyíng nǐ,” which means “Beijing welcomes you.” Originally named ‘The Friendlies,’ they were promoted as ‘Fuwa’ when there were concerns the name could be misinterpreted.