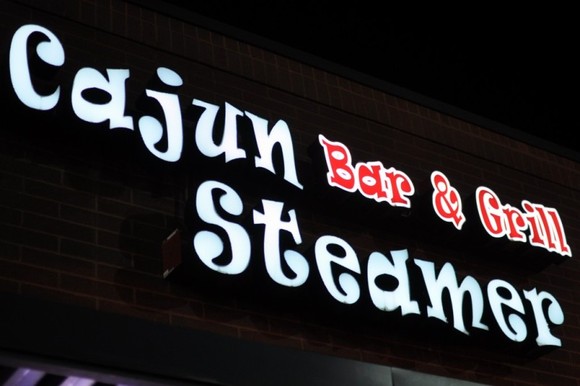 I traveled to Birmingham, Alabama on Christmas day to spend part of the holidays with The Astronomer’s family. While the majority of our meals were prepared at home, we also went out on the town a couple of times. Our first meal in the city was at the Cajun Steamer. 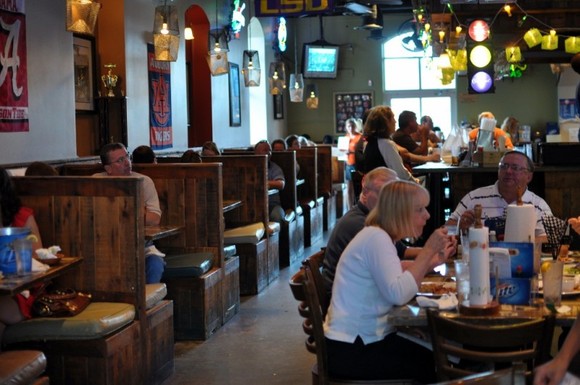 The Louisiana-themed restaurant was hoppin’ on the Saturday night we dined. The crowds didn’t seem to mind the long wait, which I hoped equated to excellent food. Our group of six was seated after thirty minutes. 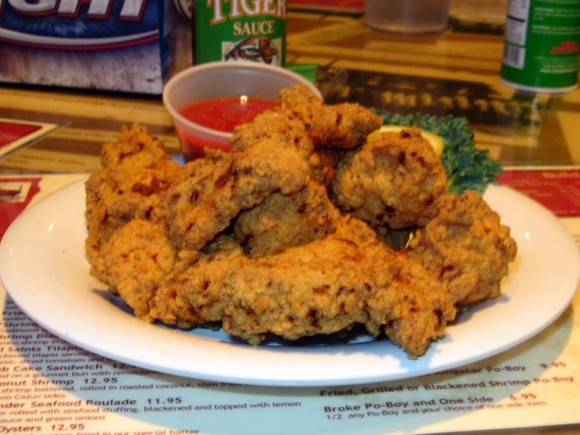 The Cajun Steamer’s bill of fare focuses on New Orleans specialties. The Astronomer’s little bro Dan started dinner off with some fried farm-raised alligator tail meat ($8.95). Dan’s a generous young chap, so he shared his gator meat with the entire table. The batter tasted like classic Southern buttermilk fried chicken, while the meat was similar in texture to chicken nuggets, but tougher due to the abundance of cartilage in the alligator’s tail. The gator nuggets were served with cocktail sauce on the side. 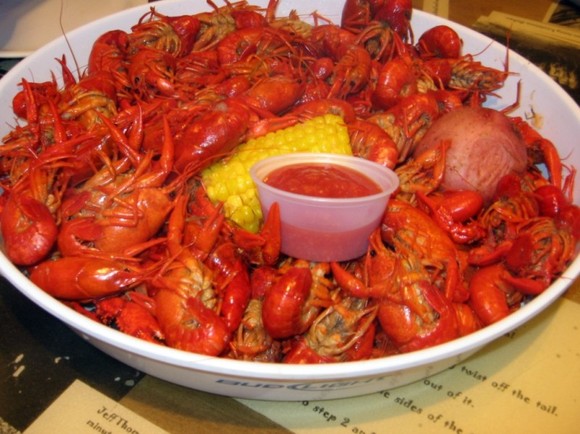 Next, we shared the Cajun Steamer’s specialty—hot boiled crawfish ($10.95). I couldn’t believe that the enormous portion that arrived was only a half order! The crawfish were prepared Louisiana-style—boiled live in a large pot with lots of seasonings including salt, cayenne pepper, lemon and garlic. Do crawfish scream like lobsters? 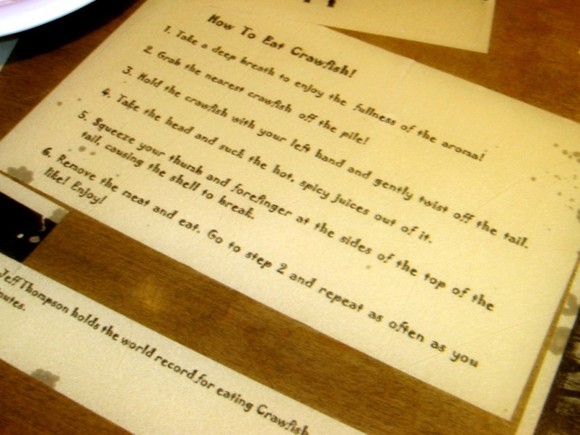 The “How to Eat Crawfish” guide on the table was a big help since this was my first time digging into these crustaceans. 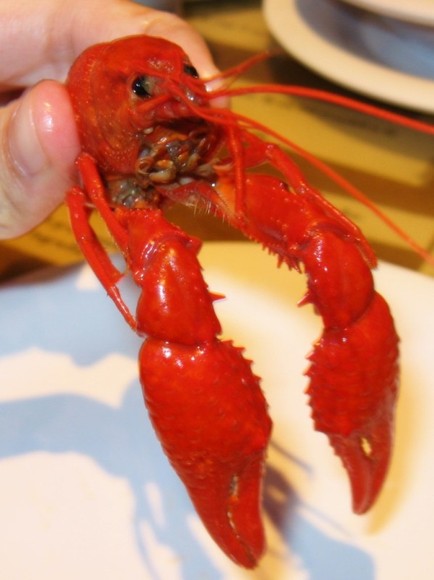 Say hello to my little friend. Slurping the spicy crawfish juice after ripping off its head was my favorite part. This starter was violent, but tasty. I just wished the crawfishes had more meat in them for me to sink my teeth into. 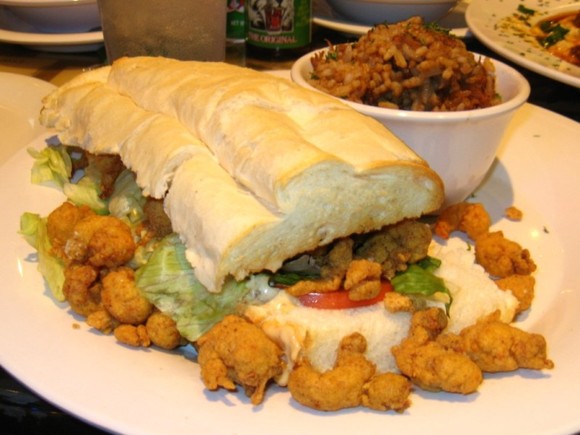 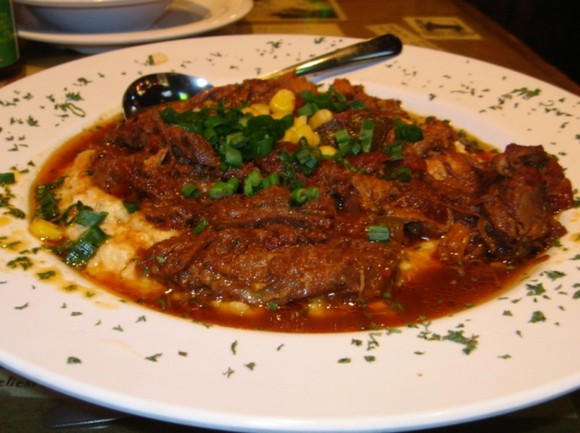 My entree, Cochon & Grits ($12.95), rocked the Cajun Steamer party. The dish was comprised of roasted Cajun pork butt with Creole Au Jus served over creamy grits, and garnished with corn and green onions. The tender pork meat was over salted, but the buttery and coarse grits helped to balance it out. Slow cooked, fall-apart-tender meat is one of my all-time favorite foods. 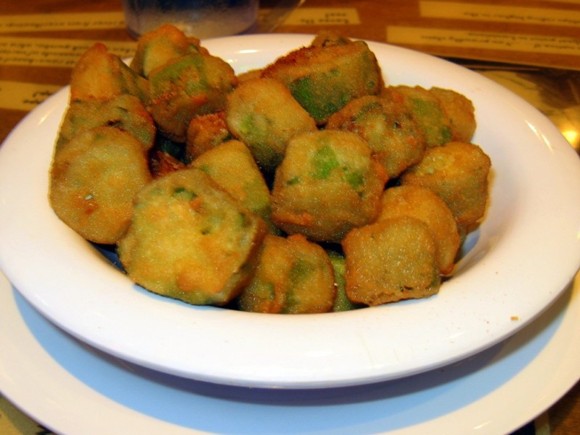 To accompany our entrees, we shared a side of cornmeal battered fried okra ($3.95), which were simple and satisfying. 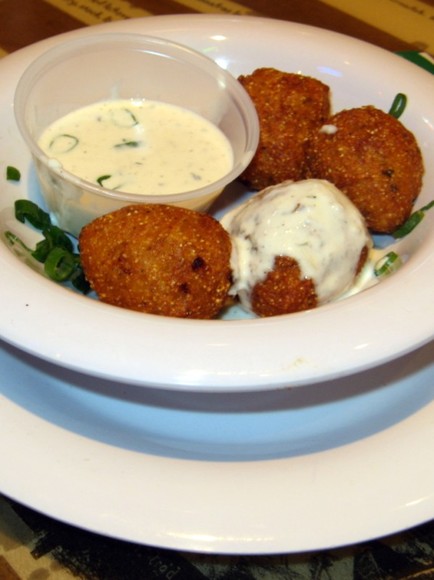 We also shared a side of Hush Puppies ($3.95), which are small cornmeal breads deep fried in a spherical shape. The hush puppies were sprinkled with green onions and served with ranch dressing. According to Wiki, the name “hush puppies” is attributed to hunters or fishermen who would quickly fry corn meal and feed it to their dogs to “hush the puppies” during cook outs or fish frys. As an all-around appreciator of carbohydrates, I thought that the hush puppies were dense, flavorful and very appealing with or without ranch dressing. 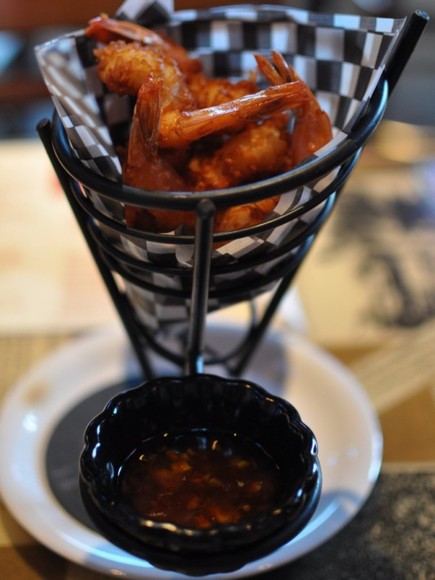 We returned to Cajun Steamer during our September 2009 trip to Birmingham. This time around, we started with an order of coconut shrimp ($7.95). The large gulf shrimp, which were battered and dipped in roasted coconut before frying, were served with an orange marmalade dipping sauce. The abundant shards of coconut contributed to the shrimps’ outstanding texture. The marmalade sauce was too sweet for our tastes. 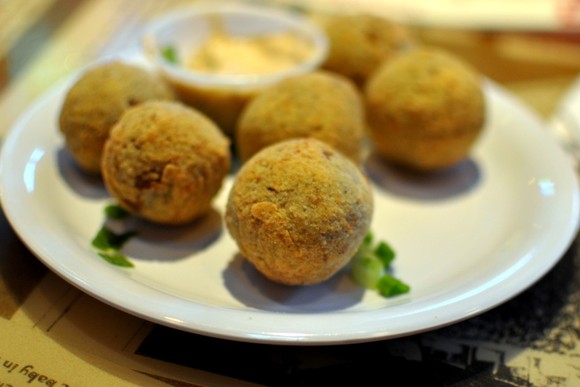 The table also shared an order of fried Boudin balls ($5.95), which were described as “hot and spicy pork with onions, rice, and herbs” on the menu. The Boudin balls, a cousin of Italian fried risotto balls, tasted fine but didn’t stand out enough to merit ordering again on a return visit. 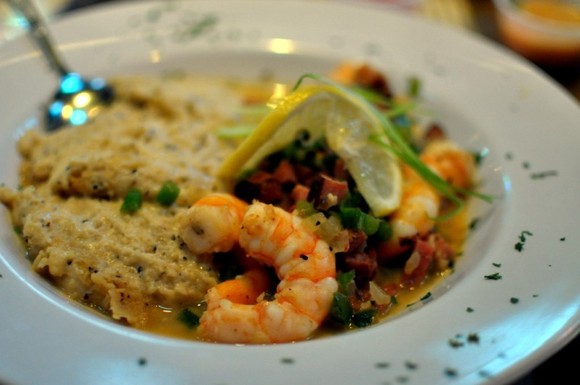 My sauteed jumbo shrimp with tasso ham over creamy cheddar grits ($13.95) was really salty, but still quite enjoyable. I liked it more than the cochon and grits I ordered on my first visit because the shrimps offered a nice contrast to the salty bed of grits and ham. 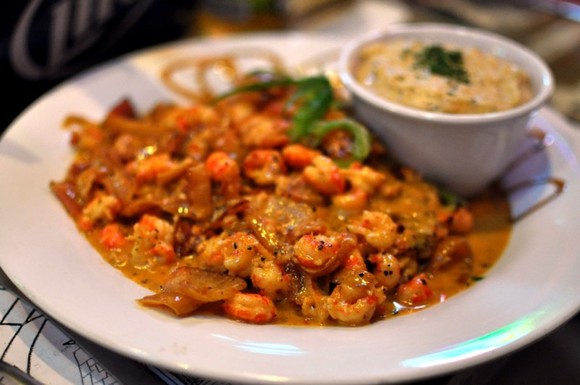 The Astronomer’s Voodoo Chicken ($13.95) consisted of grilled chicken with a creamy reduction of white wine, caramelized onions, bacon, and crawfish. Garnishing meat with additional meat is a damn fine idea, especially when bacon and crawfish are involved. 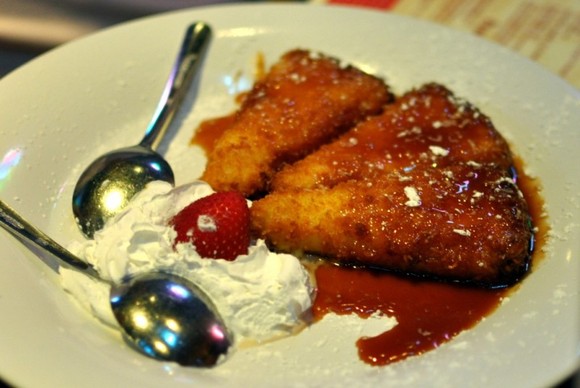 The fried cheesecake dessert ($5.95) was a huge hit with the entire table. The texture reminded me of French toast sticks, while the melted innards were rich with slight hints of cream cheese. The bourbon caramel sauce was the perfect accompaniment. Plate. Licked. Clean.