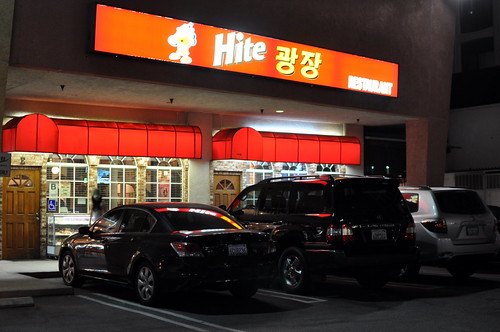 Ever since my first taste of Korean fried chicken (yangnyeom dak) a year ago at KyoChon, I’ve been seeking out these snappy-skinned specimens whenever I’m in the vicinity of Koreatown. While chicken normally doesn’t excite me, the Korean treatment—double frying and potent marinades—seems to bring out the very best in these fine feathered friends.

After previously sampling the wares at three of Koreatown’s most popular yangnyeom dak shops—KyoChon, BonChon, and Chicken Day—The Astronomer and I dined at Hite Kwang-Jang. We had heard through the blogger grapevine that it produced a standout version worthy of the title of K-Town’s top spot. 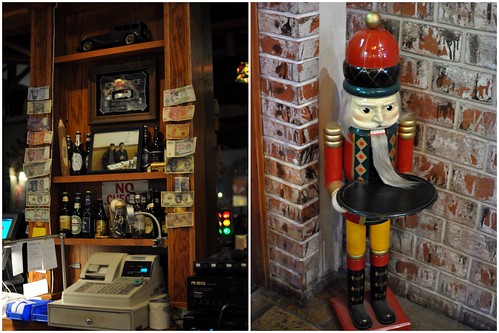 The sports bar-like space was outfitted with big screen televisions and an interesting collection of nutcrackers. Korean is the primary language spoken at this locals-only joint. Fortunately, there was an English menu for chicks who kind of look Korean but can’t speak a lick of it and their Caucasian male friends. 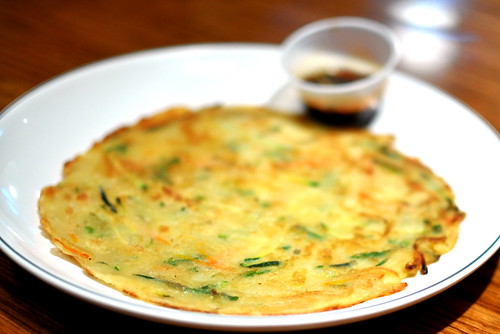 Whereas KyoChon, BonChon, and Chicken Day specialize solely in yangnyeom dak, Hite Kwang-Jang serves a plethora of Korean pub grub. We started off with a complimentary panjeon (vegetable pancake). Served with a scallion and soy dipping sauce, the pancake tasted simple and had crisped and golden edges. A free starter is a cheap and easy way to get in very good with yours truly. 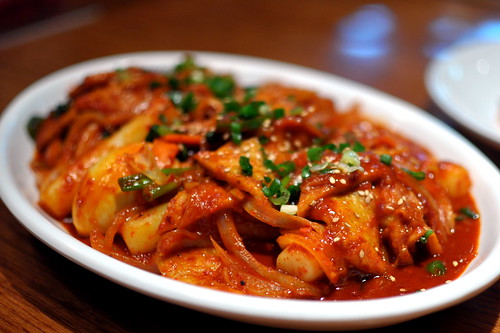 For our official appetizer, we ordered a plate of dukboki ($12.99). The cylindrical rice cakes were dressed in a shiny coat of red pepper paste (gochujang) along with fish cakes, onions, and two hard boiled eggs. The dish was garnished with scallions and sesame seeds. While the interplay between sweet and spicy was fantastic, what I really loved about this dish was the toothy texture of the dukboki. I need to learn how to make this dish ASAP. 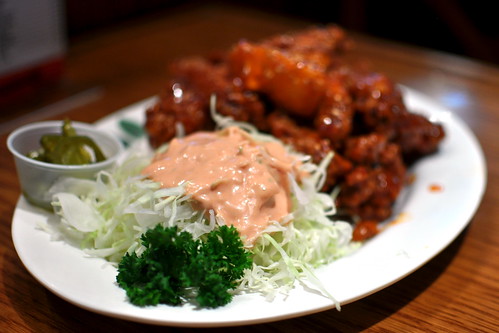 The spicy fried chicken ($14.99) arrived next. The lacquered wings were served with a cabbage slaw topped with Thousand Island dressing, pickled daikon cubes, and fried potato wedges that were seared on the outside and velvety within. 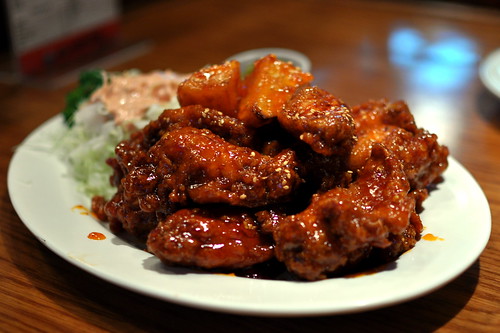 What differentiated Hite Kwang-Jang’s yangnyeom dak from other versions I’ve tasted was its hefty coating. At times it felt like I was eating all candied batter and hardly any meat, especially with the drumettes. The wings had a more balanced ratio of chicken to batter. The glaze was initially pleasantly sweet, but after downing a few, it turned out to be too sugary for both The Astronomer and me. In a way, Hite Kwang-Jang’s yangnyeom dak reminded us of General Tso’s chicken. General Tso makes a damn fine chicken, just not the one we wanted this evening. When it comes to yangnyeom dak, we desire a snappy bite and enough heat to set our mouths properly afire.