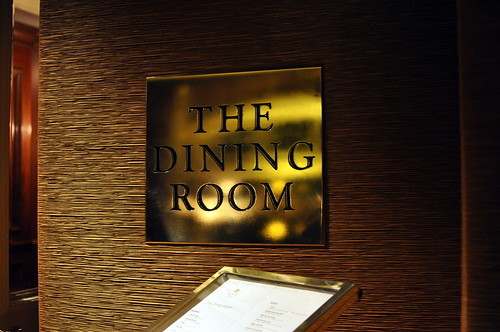 To celebrate my 28th birthday, The Astronomer treated me to dinner at Pasadena’s swankiest restaurant—The Dining Room at The Langham. I normally avoid eateries nestled inside hotels, but the opportunity to taste Chef Michael Voltaggio’s blend of classic cookery and modern bells and whistles proved too enticing to resist. Plus, the restaurant is practically located in my backyard. There is no finer gift than a short commute with no traffic, especially for a gal who hates to drive. 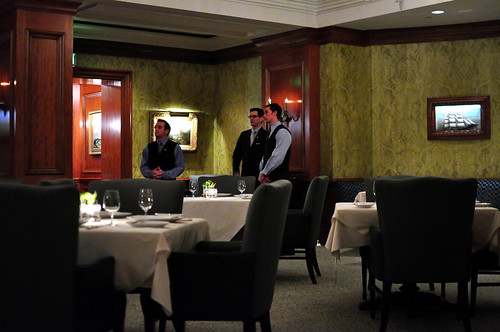 The Dining Room was mostly empty when we arrived for our 7 PM reservation, save for a handful of couples eating quietly and speaking in hushed tones. The Astronomer and I were seated quickly and with a smile by the hostess. As expected, the room’s decor was dated and stuffy. The green paisley wallpaper was the sole bright note in a sea of dark cherry wood and framed pictures of ships. Renovations are currently in the works to transform the space into one fitting of Chef Voltaggio’s modern cuisine. 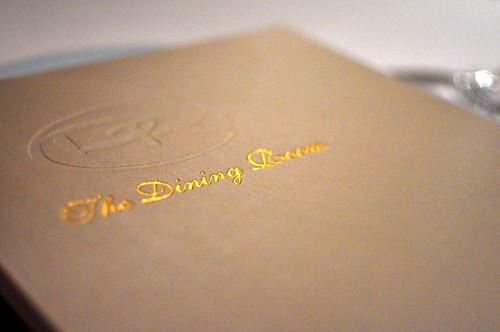 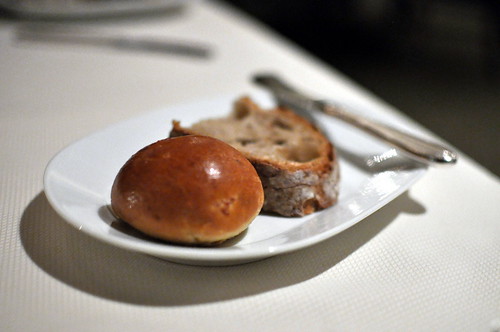 To start, The Astronomer and I were served a slice of sourdough and a bacon roll each. Presented alongside were two rounds of butter, one from Vermont and the other from France. Both butters were warm enough to spread easily. The bacon roll wasn’t on the level of Providence’s, but it was a pleasure to eat nevertheless. 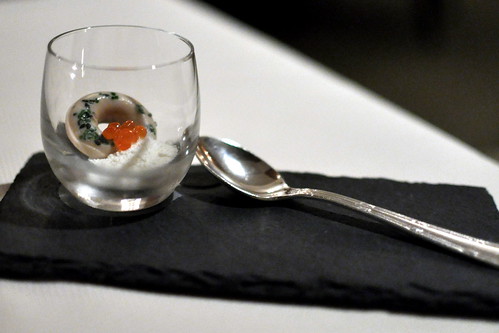 Next, the Chef sent out an amuse bouche to whet our appetites. The dish was described as a sesame bagel with salmon and cream cheese, but from its appearance, we knew we were in for a far more interesting treat. The “bagel” tasted distinctly of sesame oil and had a smooth texture not unlike cream cheese. The white powder underneath the bagel tasted like cream cheese, while the salmon roe unleashed a salty smokiness. The amuse left me amused and giddy. 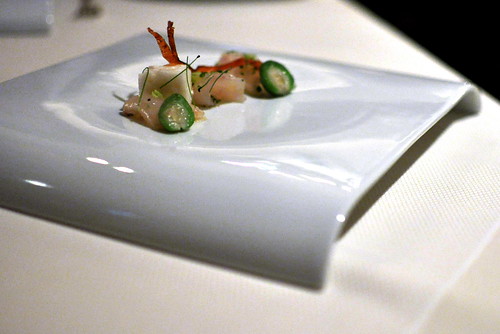 The first course was comprised of raw slivers of Japanese shima aji (a type of mackerel) served with pickled baby peach, a dashi “sponge,” and bonito. The sweet peaches proved to fine accompaniments to the mild fish. The small portion definitely left me wanting more. 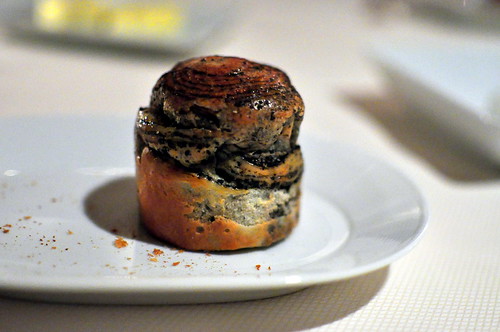 A second bread course arrived soon after we polished off the shima aji. The truffle brioche was served with a quenelle of goat’s milk butter. Dotted with flecks of black truffle, the roll smelled fabulously and tasted just as great. Although it’s hard to imagine anything trumping truffles, the goat’s milk butter was seriously spectacular. Creamy and slightly pungent, the butter paired tastily with the warm roll. 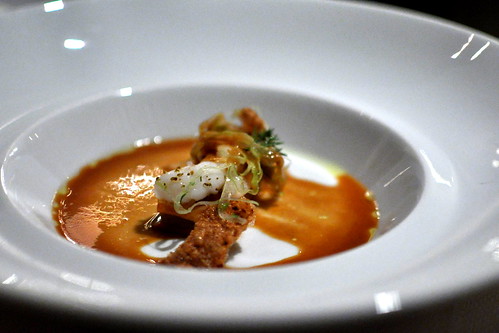 With the essence of truffle still lingering on our tongues, we were served langoustine with young fennel and lobster mushroom lasagna. Similar to my experience with the shima aji, I adored the dish but the portion size left me wanting more. Now, if the langoustine had been swapped out for a butter-poached lobster tail, I would’ve been completely satisfied. I think all Chef’s tasting menus should include a lobster tail. 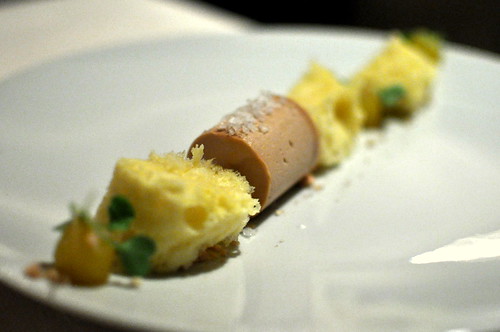 One of the strongest dishes of the evening was the foie gras with saffron-poached apples, crushed Marcona almonds, and aerated brioche. 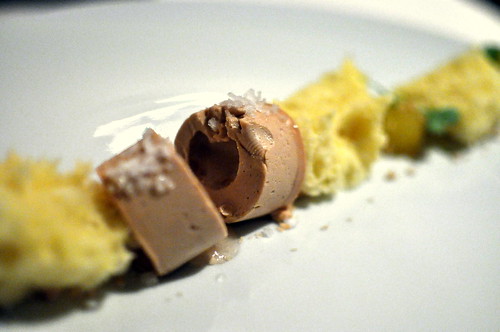 The foie gras contained a hidden pocket of apple gelee, which, along with the coarse sea salt, helped to curb its richness. In contrast to the earlier courses, the portioning here was more than satisfactory. In fact, there was so much foie gras that I had to request additional brioche to finish it off. And speaking of the brioche, it had a wonderful way of collapsing in my mouth. 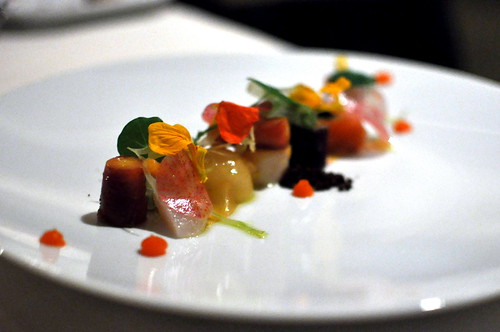 The Astronomer requested that his foie gras course be substituted with something else because he’s not keen on fatty lobes of liver. In its place was an “Autumn Harvest,” a study of vegetables of the season. The colorful plate contained 20 varieties of vegetables and flowers including hearts of palm, parsnips, carrots, and beets. Coffee granules provided a textural contrast to the vegetables. The Autumn Harvest was appealing, but the fact that it was vegetarian made The Astronomer feel like he was being punished for his dislike of foie gras. 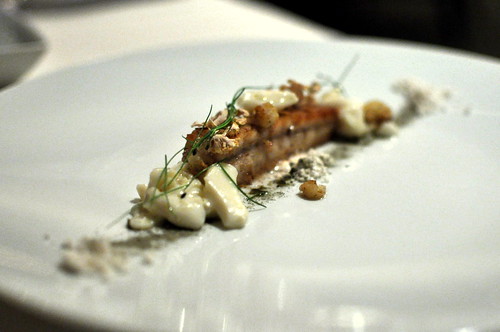 The skate wing with brown butter, scrambled cauliflower, and caper powder was well-prepared, but not wow-inducing. Try as we might, we could not get excited over cauliflower. 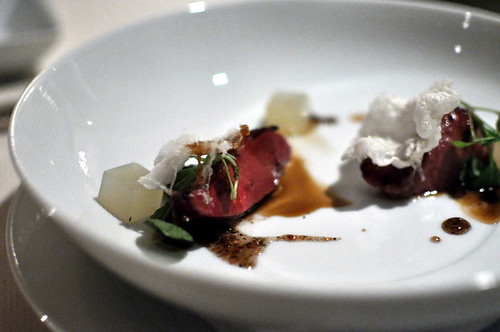 The pastrami pigeon, on the other hand, was really something special. Inspired by a Reuben sandwich, the deconstructed dish was comprised of cured pigeon, Swiss cheese “crackers,” sauerkraut gelee, and a rye reduction. The texture and flavors of the pigeon were delightful. 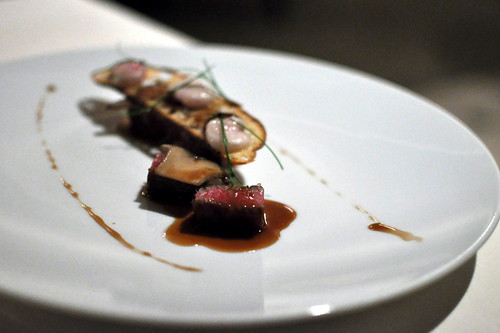 The Astronomer’s favorite course of the night was the Japanese Kuroge beef with marrow toast, matsutake mushrooms, and Bordelaise sauce. The beef’s marbling was nothing short of intense and as a result, the meat was insanely tender and juicy. 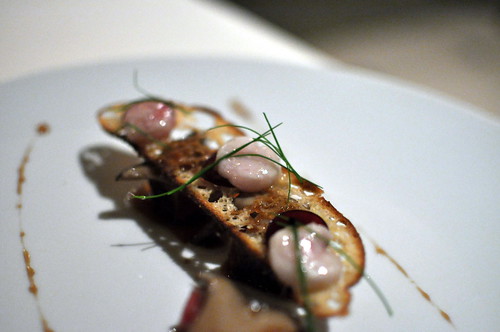 As if the steak wasn’t decadent enough, the marrow toast took the dish to a whole new level. 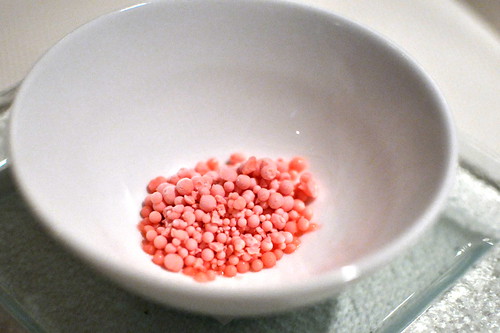 Transitioning from savories to sweets, we were served a hibiscus and raspberry sorbet palate cleanser. The little Dippin’ Dots were made using liquid nitrogen. 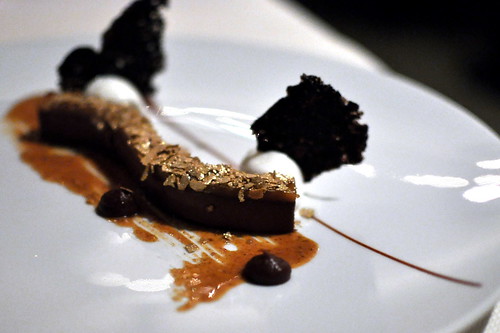 The Astronomer and I were each served a different dessert. For her: Fools Gold with chocolate, salty hazelnut praline, peanut butter, and milk sorbet. The shards of gold atop the cake reminded me of corn flakes. 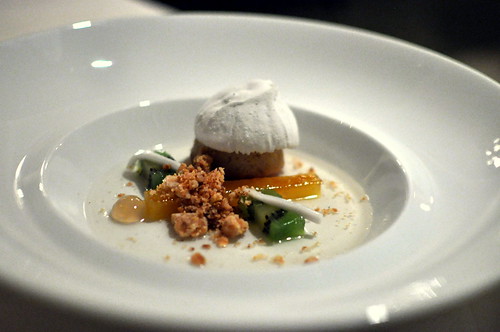 And for him: Baba Au Rhum with kiwi, pineapple, and coconut in various forms. This dessert was reminiscent of the Nitro Coconut Floating Island served at The Bazaar, Chef Voltaggio’s former haunt. The Baba Au Rhum was very refreshing and I preferred it over the chocolate creation. 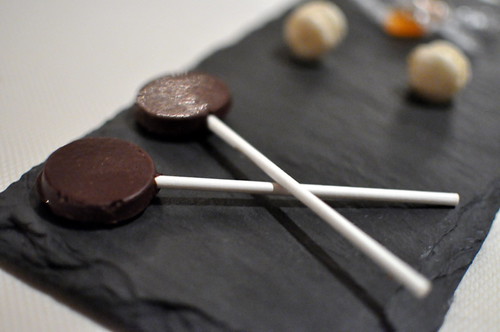 A slate of mignardises arrived along with the check. The dark chocolate lollipops were embedded with crackling Pop Rocks, another oldie but goody trick from The Bazaar. They’re like “fireworks in your mouth,” proclaimed The Astronomer. “A celebration at the end of the meal!” 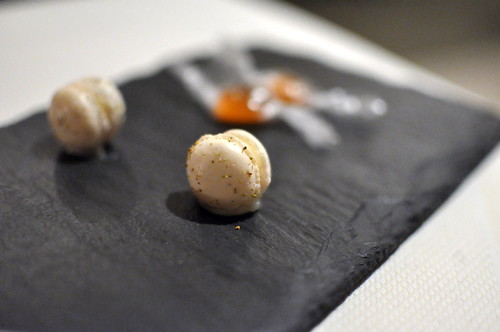 For me, the mark of a spectacular dinner are those special moments when a bite is so good that I’m forced to shut my eyes and zone out the room in order to fully absorb its awesomeness. While I experienced several very good courses at The Dining Room, I wasn’t floored by any one dish. The Astronomer, on the other hand, was a goner after that steak.

26 thoughts on “The Dining Room at The Langham – Pasadena”