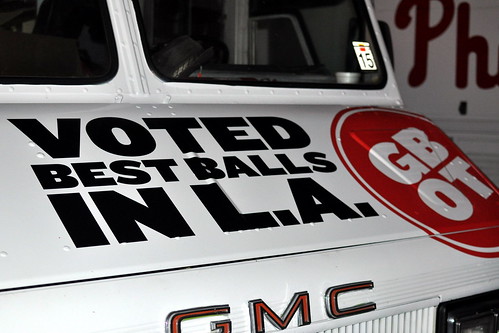 When I stopped by the Ahn Joo truck a little over a month ago, Debbie Lee tipped me off that a meatball truck would be hitting the streets shortly. Meatballs and I get along quite swimmingly, so this was one launch that I was a wee bit more excited for than the rest.

After polishing off two gut busting deep-fried sushi rolls from Yatta-! Truck at Art Walk, The Astronomer and I moseyed on over to Great Balls on Tires for our second course. 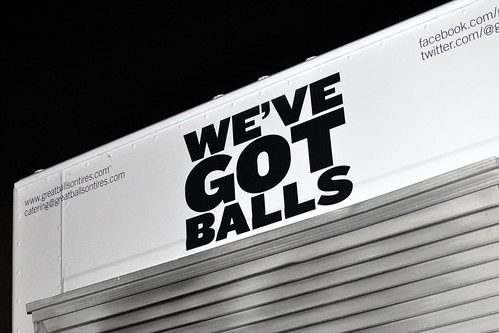 Great Balls on Tires was founded by Clint Peralta and Michael Brombart. According to the truck’s website, the duo chose to focus on meatballs because of their universal popularity and appeal. “They are found in nearly every culture with names like polpette, kofta and frikadel.  They are found in dumplings and on top of spaghetti all covered with cheese.” 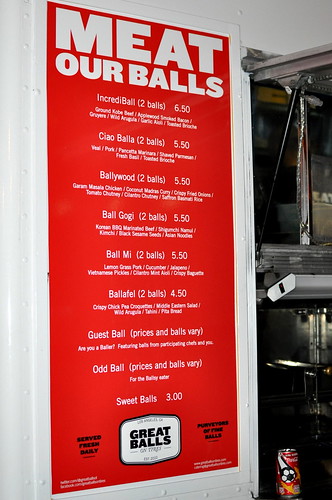 Inspired by travels abroad, the menu encompasses a wide range of flavors from Europe, Asia, and the Middle East. By the time we arrived at the truck, they were sold out of the “IncrediBall” (Kobe Beef ball wrapped in bacon and gruyere) and the “Ballywood” (Garam Masala chicken ball cradled in a coconut curry and set atop saffron basmati rice), two of the most enticing menu items. After a bit of hemming and hawing, we finally settled on the “Ball Gogi” ($5.50). 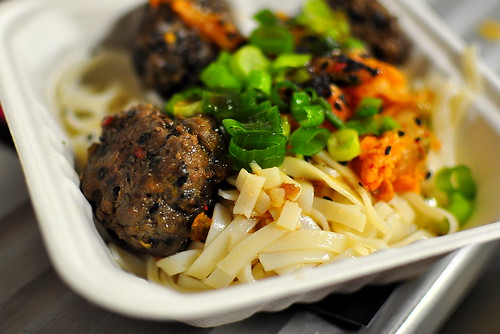 The Ball Gogi takes traditional Korean flavors and serves ’em up on a bed of rice noodles. The ground bulgogi meatballs were accompanied by sigumchi namul (Korean sesame spinach), kimchi, and black sesame seeds. I really liked how the Ball Gogi captured a Korean barbecue experience in a neat and tidy package. The entire dish reminded me of a Vietnamese bun dish, minus the saucer of fish sauce on the side.

Dirty puns involving balls are fairly low brow, but I’m not above that kind of humor, especially when the food speaks for itself.

UPDATED: The Astronomer and I spent the afternoon with the GBOT truck in early March 2011 for a Food Network taping of Eat St. We sampled three new balls from Chef Michael David’s updated menu. 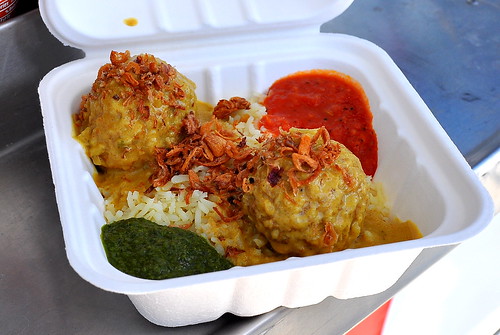 The Ballywood ($5.50) was sold out on my initial visit to the truck, so I was excited to finally get my hands on ’em. Served on a bed of saffron basmati rice, the garam masala chicken balls were doused in a creamy coconut Madras curry and topped with fried shallots, tomato chutney, and cilantro chutney. I appreciated the array of vivid flavors; each bite packed a burst of heat and spice. 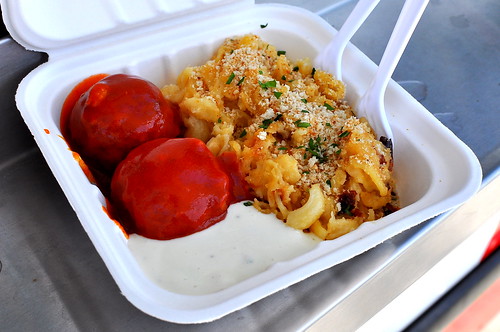 I was also a big fan of the trailer park-esque BuffaloBalls ($5.50). The chicken balls were effectively coated in a classic tangy buffalo sauce and served with a side of mushy, yet appealing mac and cheese. The blue cheese dressing tasted great with both the macaroni and the buffalo balls. 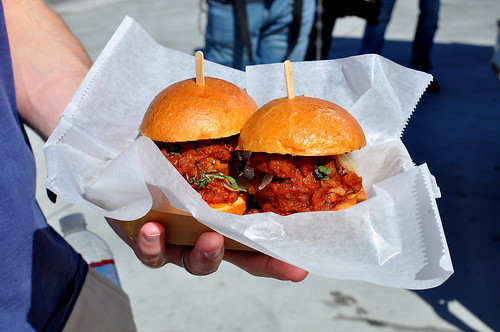 The Ciao Balla ($5.50), which was made from a veal and pork mixture simmered in a pancetta marinara sauce and served on toasted brioche, tasted like a gussied up meatball sub. The shaved Parmesan and fresh basil brought a burst of herbaceous umami, tying all of the sliders’ flavors together.