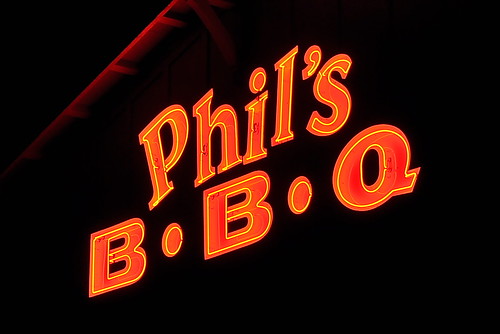 Phil’s BBQ opened its doors for business sometime during my junior year of high school. Back then, I was too wrapped up in boys, college applications, and SAT scores to keep tabs on new and notable openings in town. Plus, I was pretty content with spending my paltry dining dollars at Islands Fine Burgers & Drinks and Mario’s De La Mesa. Phil’s didn’t register on my radar until well into its tenth year of business. These days, any news of great barbecue captures my attention at first mention. BBQ > Boys. Oh, how times have changed! 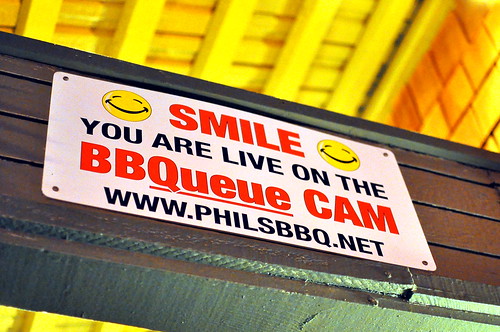 My cousin Phil and I have been planning to check out this joint for almost a year now, but we didn’t get around to it until my recent trip to San Diego during the holidays. When The Astronomer and I arrived on the scene, there was a line snaking out the restaurant’s front door. It initially looked quite intimidating, but all in all it took less than half an hour to make our way to the front.

For those skittish about long waits, Phil’s has installed a “BBQueue Cam” at both of its locations that monitors queuing activity and provides estimated wait times. 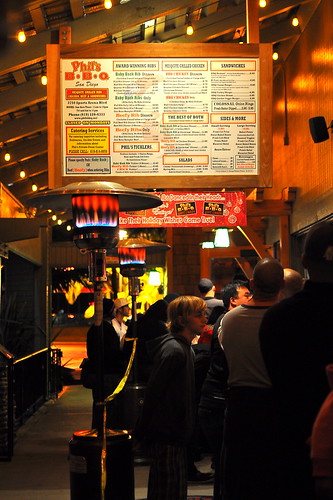 The wood-framed menu signaled that the end was in sight. To entertain ourselves while we waited, The Astronomer and I, along with our dining mates Cousins Phil and Kristine, hashed out a plan that involved ordering one of each meat on the menu and all of our favorite sides. There’s nothing like sweet anticipation to get the salivary glands going. 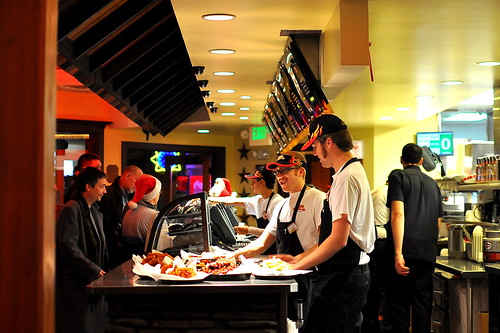 We knew our order by heart by the time we reached the line of registers. After paying for the goods, we were given a buzzer that lit up and vibrated when our food was ready for pick up. In the mean time, we wandered the dining room in search of an unoccupied table. Fortunately, one of the cool dudes working the dining room floor took pity on us and located a table fit for four. 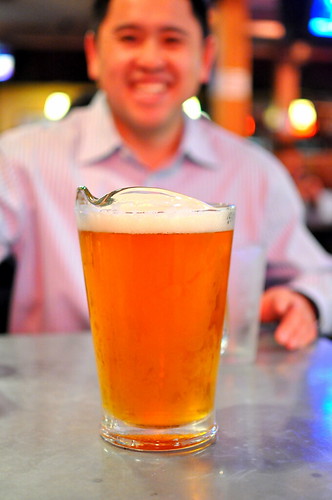 The Astronomer and my cousins shared a pitcher of beer with their ‘cue. I was happy sipping on ice water. 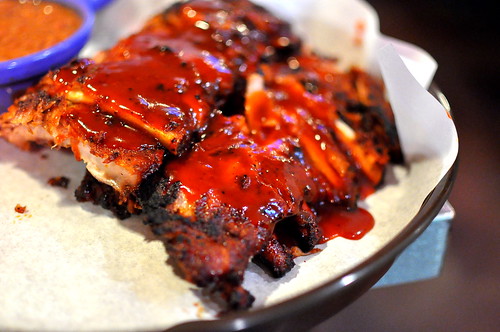 According to the restaurant’s website, owner Phil Pace doesn’t come from a long line of barbecue masters.  Nevertheless, he caught on fast, and Phil’s quickly became one of the most popular restaurants in San Diego.  The restaurant’s signature sauces and rubs, which are available for purchase at Costco by the way, were inspired by Kansas City- and North Carolina-style barbecue. Mesquite is his wood of choice.

When it comes to barbecue, all that I want is super-tender meat imbued with smoky goodness, a finger lickin’ good sauce, and solid sides. Phil’s made a solid showing on all three fronts.

To start, I dug into the “Full Rib Dinner” ($18.95). The baby backs were sauced up generously and charred along the edges. The flavorful meat was gnawed off the bone with ease, while the sweet sauce kept everything nice and moist. The sauce became slightly cloying toward the end, but I definitely liked it at first taste. 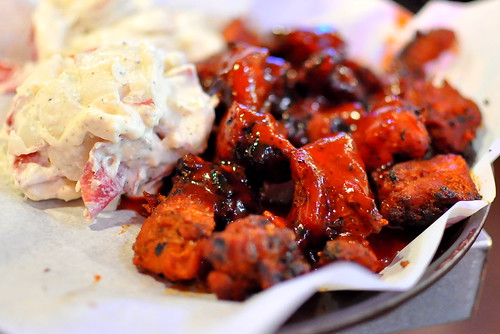 In between bites of ribs, I chewed on some “rib-less” nuggets ($10.95). Eating meat straight off the bone is admittedly much more fun, but these meaty chunks were more than satisfactory. 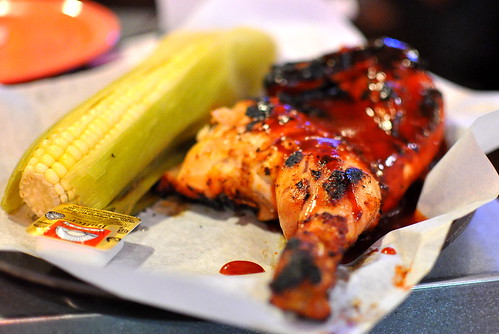 I passed on the grilled half chicken ($8.75) because chicken often bores me. However, my dining mates reported that the meat was juicy and tasty. 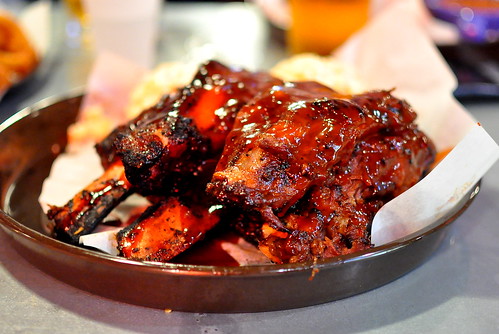 The best of the meats were the “beefy” ribs ($19.95). I initially scoffed at the concept of a large order consisting of only five bones. Little did I know that one cow rib was going to be the size of my forearm. Chomping down on moist and smoky mouthfuls of cow satisfied my inner caveman like no other. 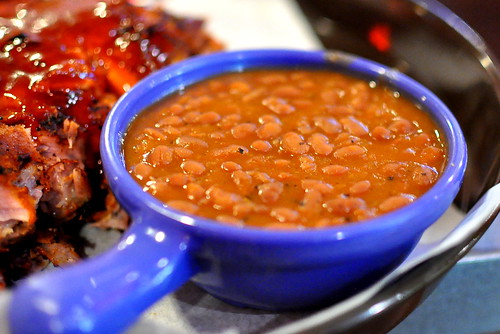 All of the meats came with sides of our choice. My favorites were the sweet baked beans… 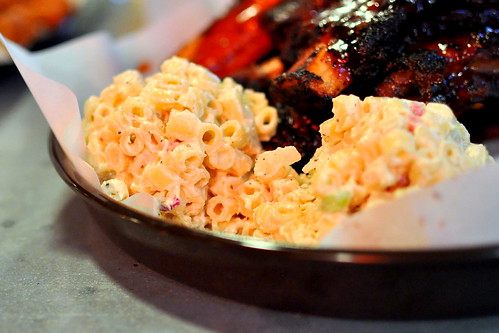 …and the macaroni salad. 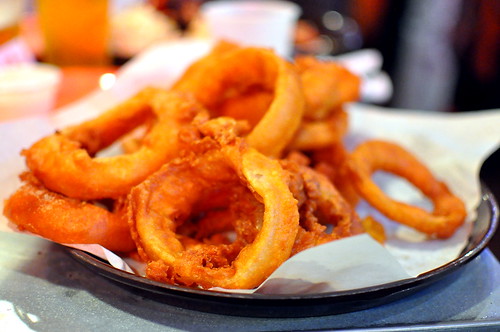 We also shared a large order of battered onion rings served with ranch dressing ($5.95). Fried to order, the pile of rings were hot, crispy, and totally dunkable. Ranch dressing makes everything it rubs upon heavenly. 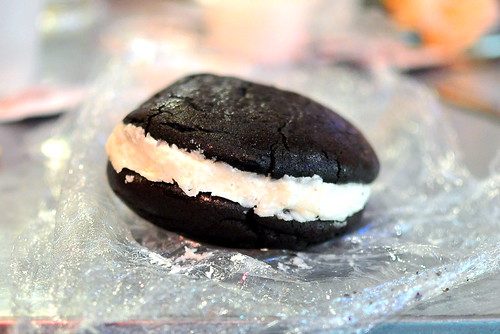 For dessert, Kristine and I shared a whoopie pie. The cake was on the crumbly side, which made for a messy lap, but everything else was terrific.

If I had known about Phil’s BBQ back in high school, I would’ve held my super sweet 16 here. It would’ve brought all the boys to the yard.