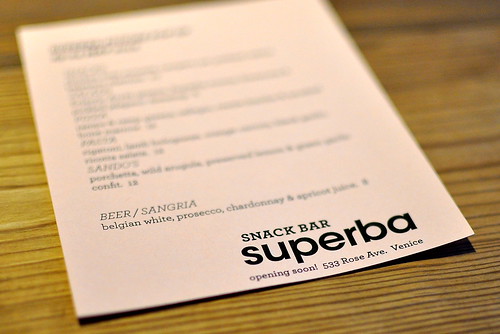 Restaurateur Paul Hibler and Chef Jason Neroni hosted a sneak peek of their forthcoming collaboration Superba Snack Bar at Pitfire Pizza in West Hollywood last week. The restaurant, which is expected to debut this summer in Venice, offers their “post modern” take on an Italian pastaria serving handmade pastas, charcuterie, and plenty of local produce.

Previously, Hibler was the owner and creator of the popular chainlet Pitfire Pizza, while Chef Neroni was the executive chef at Osteria La Buca. This is their first joint venture together. 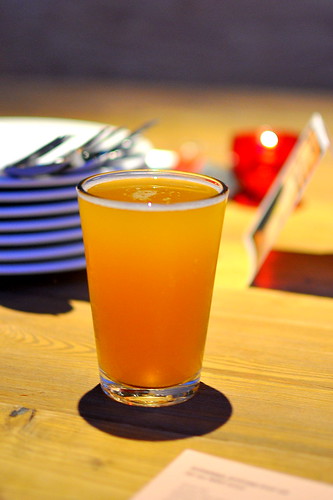 The Astronomer and I attended the pop up event as guests of Superba. As soon as we grabbed a table, chilled glasses of “beer/sangria” were brought to the table. Made from a mixture of Belgian white beer, prosecco, chardonnay, and apricot juice, the beverage was wonderfully refreshing and went down dangerously easily. I had to limit myself to two glasses to keep from getting too rowdy this evening. 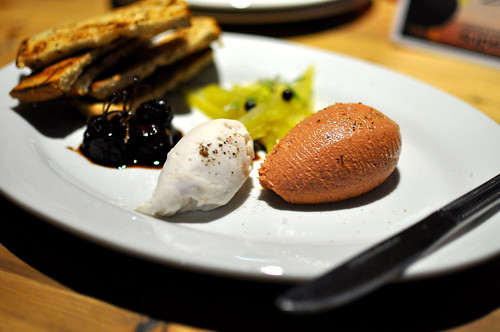 Our first bite of the night was the chicken liver mousse and lardo served with toasted Langers rye, pickled celery, and balsamic cherries. The bread had too much personality for the simple lardo, but paired just right with the velvety liver spread. The cherries made our lips pucker, cutting the spreads’ richness with its tanginess. 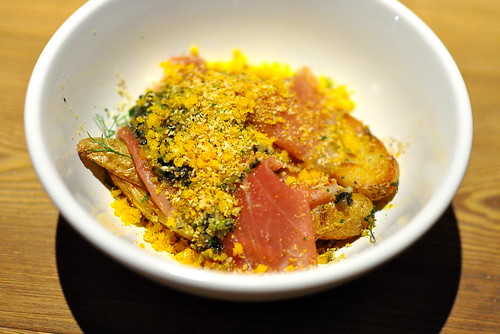 Next, Chef sent us potato rafts topped with bottarga, smoked ham, black truffles, and best of all, a duck egg. The runny yolk tied all of the ingredients together with its rich coat. 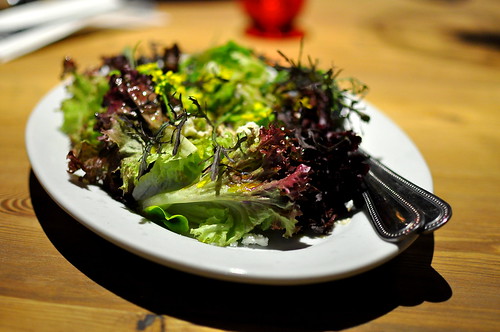 It’s a tough gig following up chicken livers and duck eggs, but this simple plate of greens, red mustards, and blossoms from Eclectic Acres handled it with aplomb. The crumbles of house-made ricotta and pickled jalapeno dressing were really something special. 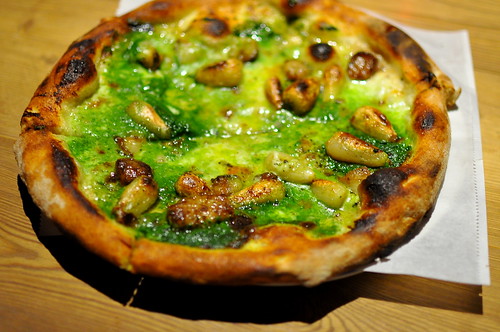 One of the most exciting dishes of the night was the ramp pizza (greens and bulbs) with taleggio, crème fraiche, and smoked bone marrow. Each slice had a slick of fat that the garlicky ramps tried to reel in, but in the end, the marrow ruled the pie. 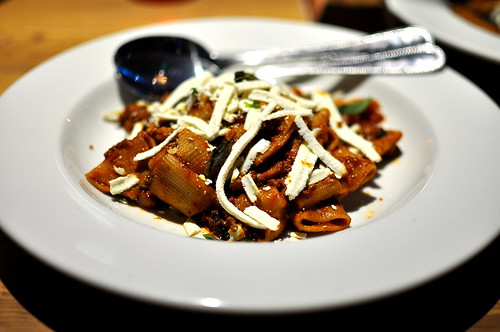 Another strong dish was the handmade rye rigatoni with lamb Bolognese, carrots, black garlic, ricotta salata, and peppermint. The pasta had a great bite to it, while the sauce brought serious flavor, especially the bites with black garlic. 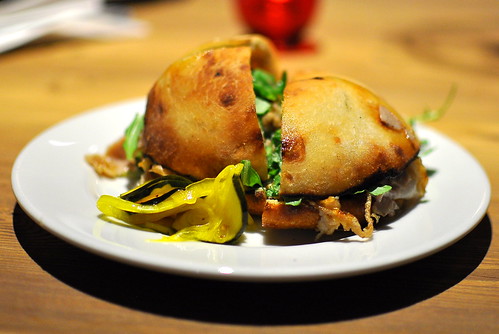 The most delicious plate of the night was the porchetta sandwich with arugula, preserved Meyer lemon, and green garlic confit. The bright citrus notes totally made this dish porky dish pop. 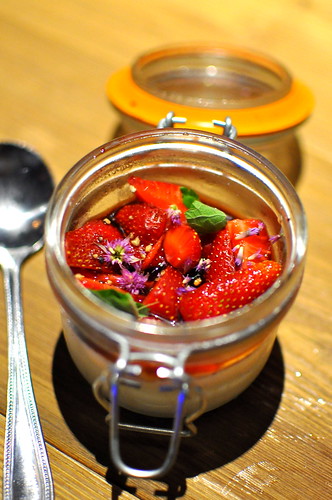 To finish, a gorgeous black pepper panna cotta with strawberries, anise, hyssop, and vincotto (Italian “cooked wine”). After such a heavy and savory meal, this was just what my taste buds demanded.

Venice residents are in for a treat when Superba opens later this year. The food that we sampled tonight was thoughtful, interesting, and undoubtedly tasty. It will be quite a trek from Pasadena to the beach, but Chef Neroni’s cooking, especially his pitch perfect porchetta, will make the trip worthwhile.

There’s more to eat in Venice: