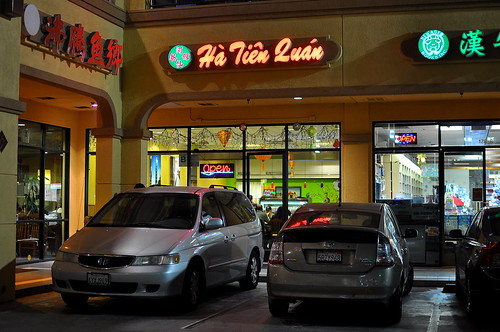 Dining at a single restaurant on five different occassions in the span of two months has got to be some sort of record for me. While this type of behavior is generally considered quite normal, it’s really very notable in my world because food blogging tends to discourage restaurant monogamy—there’s always something newer, more exciting, or tastier just around the corner. 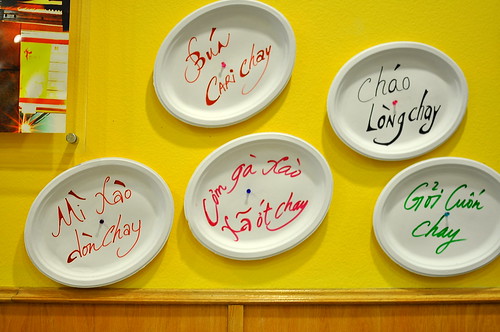 Hà Tiên Quán in San Gabriel has reeled in my promiscuous dining ways with its tremendous Vietnamese cooking. The restaurant’s lineup of regional noodle soups never fails to warm and satisfy, while the vegetarian fare packs a wallop of flavor.

With nearly every Vietnamese restaurant in town serving up the usual pho, vermicelli rice noodles, and and banh mi, it’s been a breath of fresh air diving head first into Hà Tiên’s anything-but-predictable menu. Best of all, I’m constantly tasting new dishes that I didn’t grow up with or encounter while living in Vietnam. This place is my edible playground. 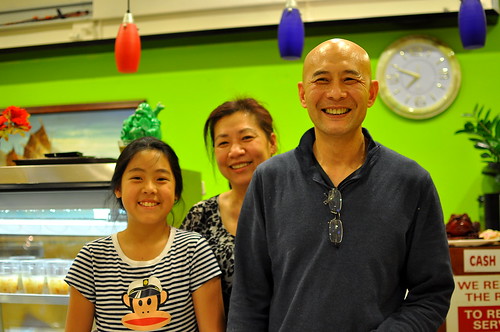 The family behind the restaurant is comprised of Larry Ta, his wife Thu Trang, and their daughter Carolyn. Thu heads up the kitchen, while Carolyn and Larry greet, seat, and tend to customers. Both Larry and Thu are from Ha Tien, a city on the western end of the Mekong Delta near the Cambodian border. Hà Tiên Quán opened its doors last October. 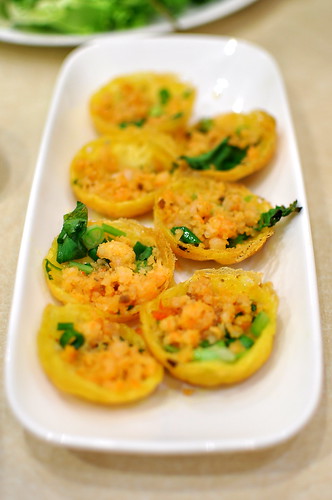 On my first visit to the restaurant, Garrett and I began with an order of  banh khot ($6.98), a specialty of the southern coastal city of Vung Tau that tastes quite a bit like banh xeo due to their similar batters and accouterments. We wrapped these “airy fairy” shrimp-topped bites in lettuce and herbs and proceeded to dunk ’em in fish sauce. 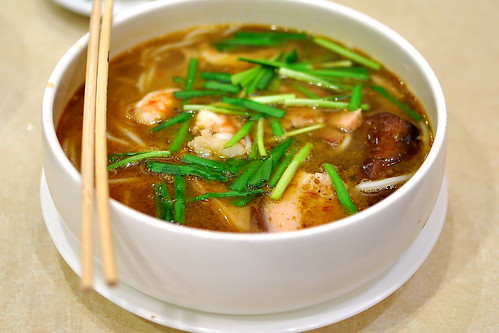 We also shared two of the restaurant’s signature noodle soups. The bun mam ($7.25), an anchovy-laced brew brimming with pork belly, chunks of catfish, shrimp, Japanese eggplant, and chives, won my heart completely with its heady, unabashed funk. Hidden beneath the dark broth were smooth and slippery rice noodles. 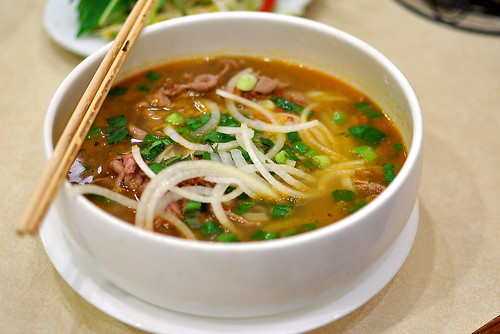 Much less fermented but equally fabulous was the hu tieu nai sate ($7.25), which is served with either rice or egg noodles. The lean slivers of New Zealand venison paired terrifically with the chili- and lemongrass-tinged broth. 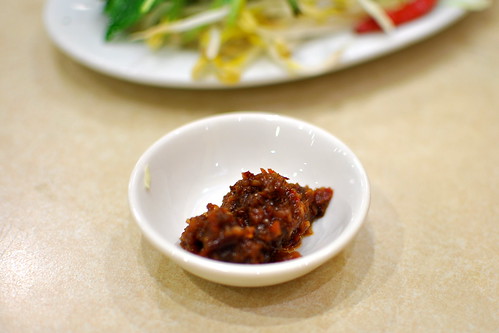 An extra dollop of sate paste was on hand to up the spice quotient as needed. 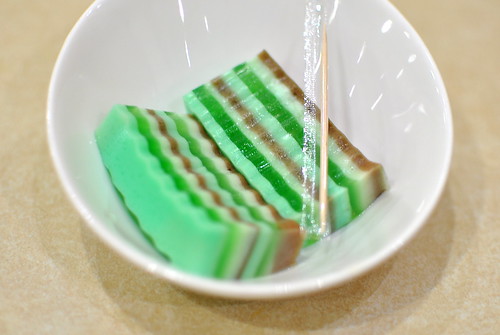 For dessert, Anh Larry brought us samples of the house-special rau cau ($7 for a generously portioned tray). Made from agar-agar and flavored with pandan, coffee, and coconut milk, the rau cau made for a seriously refreshing finish. 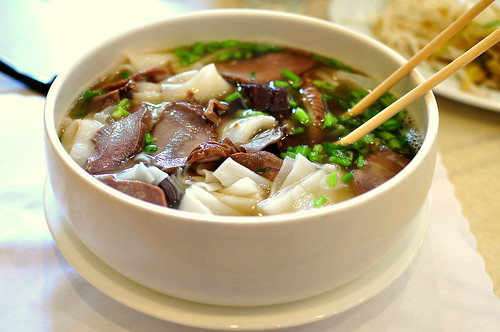 I sampled the hu tieu ho pha lau ($6.48) on another occasion when my mother was in town. Swimming in the delectable five-spice broth was a mix of pork intestines and tongue, congealed pork blood (huyet), and thin rice paper sheets reminiscent of banh uot. Copious amounts of fresh celery kept me from totally swooning over this dish, but everything else was on point. 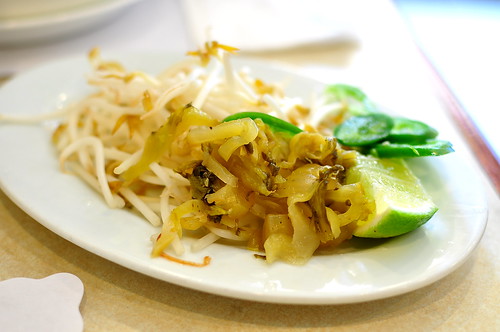 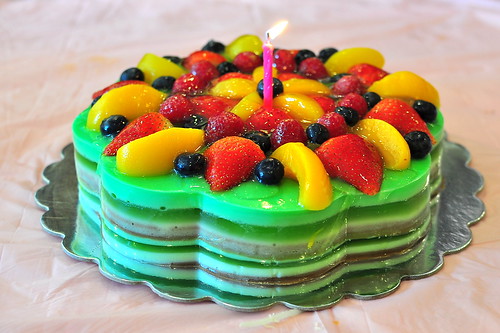 I was so smitten with Hà Tiên Quán after three visits to the restaurant that I celebrated my 31st birthday here with a big group of friends. The restaurant made a perfectly festive rau cau “cake” ($35), while I ordered a big ‘ol bowl of bun mam for the occasion. 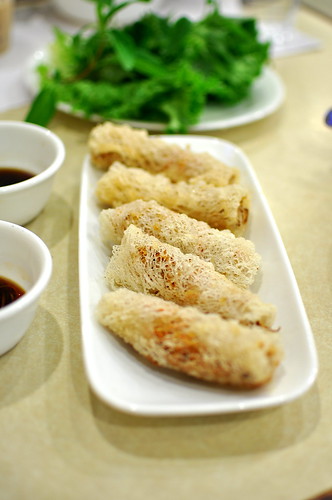 Most recently, The Astronomer and I returned with our vegetarian friend Raga to explore the meatless menu options. We began with an order of the cha gio chay ($5.80), deep-fried egg rolls. What’s special about the cha gio here, both the vegetarian and meat-filled varieties, is the gauzy wrapper that makes for an unbeatable crunch. 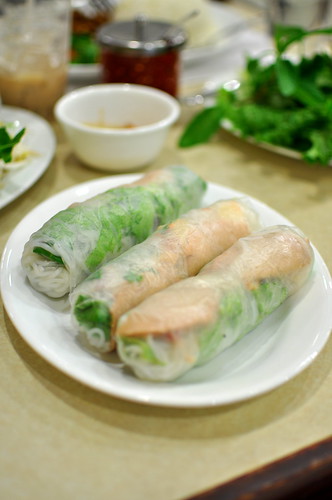 The fresh spring rolls, goi cuon chay ($6.48), were filled with lettuce, a few herbs, vermicelli noodles, and slivers of mock shrimp and pork. A hoisin-based dipping sauce was served on the side. I didn’t miss the flesh one bit. 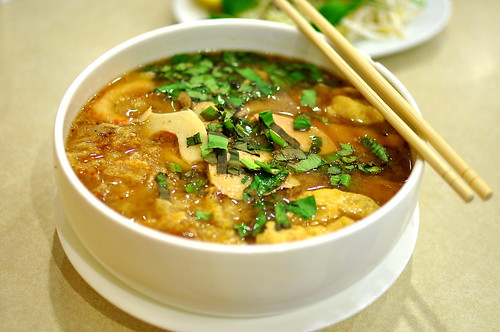 Hà Tiên Quán makes a vegetarian version of their famous bun mam ($6.98). While it’s not nearly as intense as the original version, the bun mam chay still manages to capture the spirit of the dish. 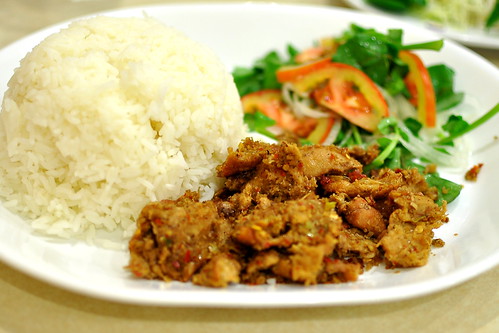 The ga xao xa ot chay ($6.98), mock chicken with lemongrass and chilies, is my favorite of Hà Tiên Quán’s vegetarian options. The avalanche of lemongrass, coupled with a hint of spice, makes for a very satisfying package.

From the one-of-a-kind noodle soups to the hearty vegetarian fare to the warm hospitality, there’s so much to love about Hà Tiên Quán.