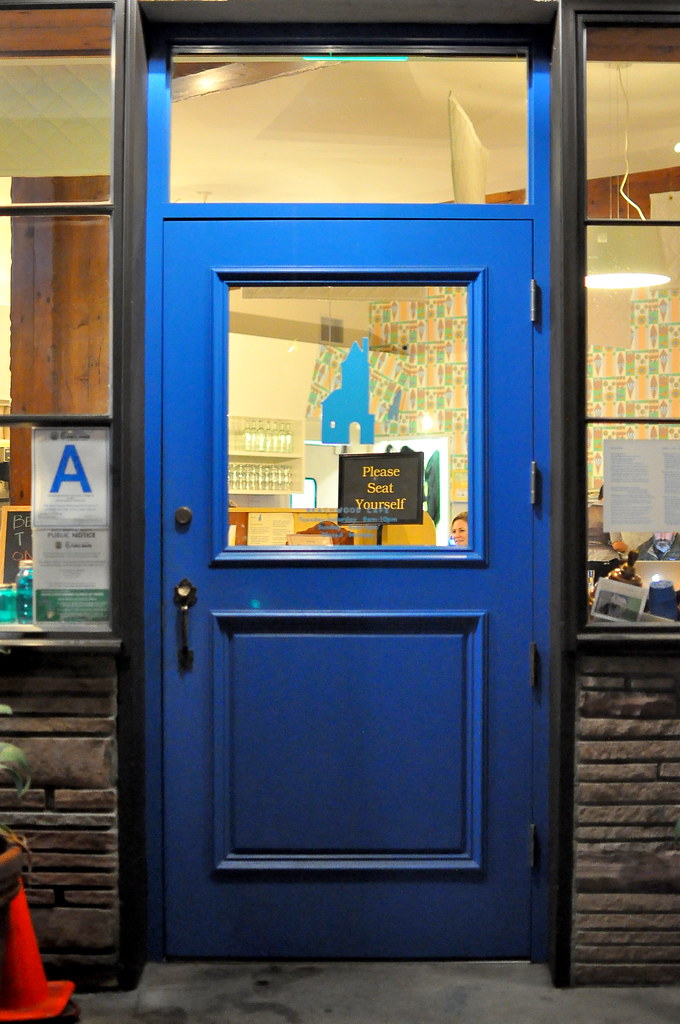 The residents of Beachwood Canyon are incredibly lucky to have a place like Beachwood Cafe to drop into for breakfast, lunch, and dinner. The space couldn’t be any more adorable, while the cooking  is thoughtful and satisfying.

Owner Patti Peck took over the former Village Coffee Shop last March and, along with Chef Minh Phan, converted the one-time greasy spoon into a cozy neighborhood spot serving farm-to-table fare. The Astronomer and I, along with a gaggle of girlfriends, dined at Beachwood Cafe on an uncharacteristically rainy Friday night. The damp weather demanded just the sort of hearty fare that Chef Minh executes superbly well. 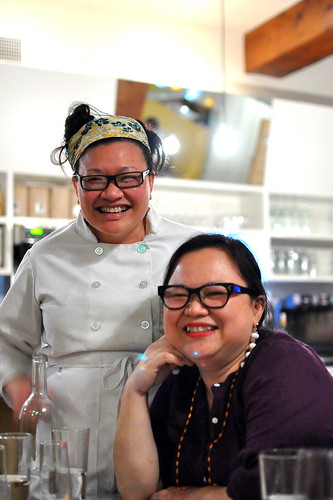 Previously, Chef Minh (left) attended Le Cordon Bleu, served as the Pastry Chef at Axe in Venice, and spent time in the kitchens of Gotham Tavern in Portland and the Inn of the Seventh Ray in Topanga Canyon. That’s our friend-in-common Diep Tran on the right. 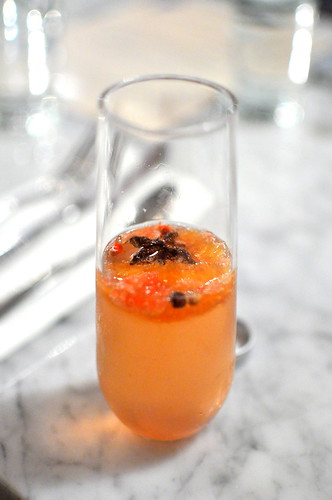 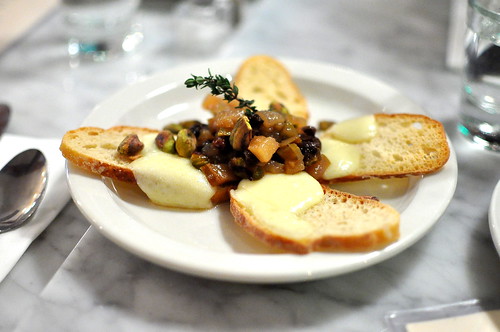 While we waited for the rest of our group to arrive, Chef Minh sent out an order of crostinis draped in melted fontina and topped with a pear, currant, and pistachio chutney ($5). These crisp little bites were well balanced—a little sweet and a touch savory. 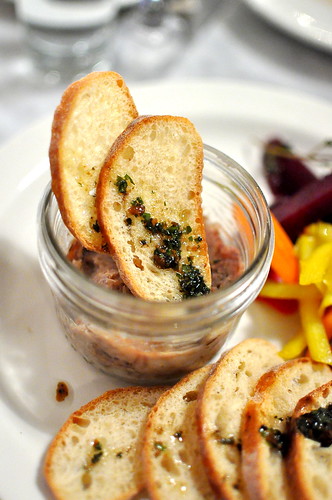 We also shared an order of the fennel pork rillettes ($9), which were downright fabulous. Whereas most pork rillettes that I’ve encountered previously were unabashedly unctuous, Chef Minh’s version had a rounded savoriness to it that we found irresistible. This is a must-order for those with a penchant for potted pork. 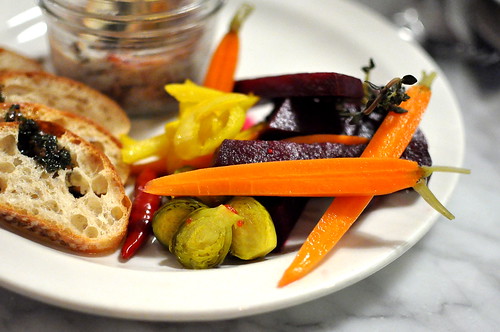 Served alongside the rillettes were thyme-scented house-made pickles (baby carrots, Brussels sprouts, beets, and onions), as well as toasted bread. 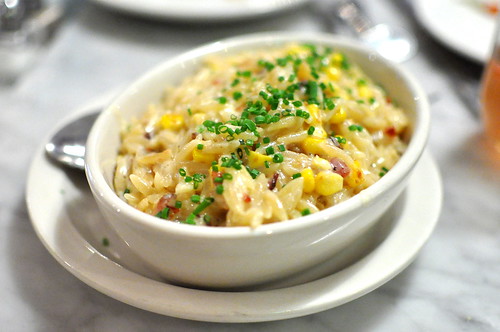 Chef Minh also sent out a comforting bowl of cream-braised orzo dotted with corn and smoked bacon ($12). I could’ve polished off the entire serving solo in spite of its richness. This unassuming side dish was truly stellar and well worth the creamy splurge. 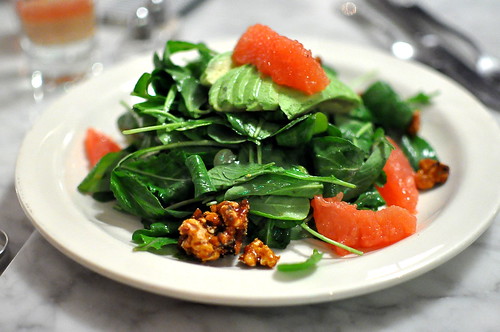 Dinner officially began with a duo of salads. The first consisted of a bed of baby spinach prettied with grapefruit, avocado, and candied walnuts in a champagne-tarragon vinaigrette ($9). 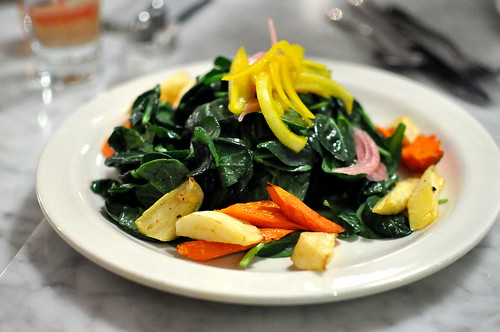 The second was comprised of tatsoi mustard spinach garnished with roasted parsnips and carrots and pickled onions in a curry balsamic vinaigrette ($10). 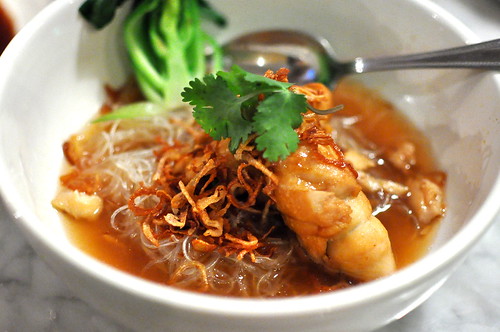 Moving on to the main courses, we sampled a fetching noodle soup made with glass noodles in a tamarind-ginger broth with baby bok choy and a shallot confit ($23). The pièce de résistance was the dover sole stuffed with shiso and enoki. The broth was light and beautiful, while the fish could not have been any tenderer. 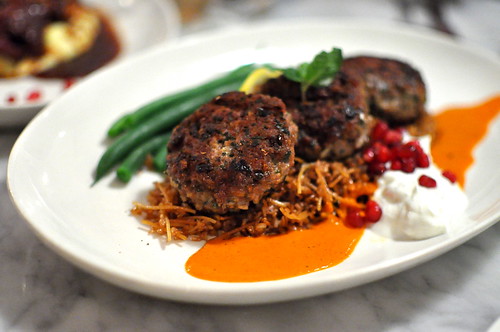 My favorite among the main courses tonight was the lamb kofta served with a bulgur pilaf, haricot vert, and a pomegranate-tarragon tzatziki ($23). The bulgur pilaf, with its fried noodly bits and pitch-perfect seasonings, was my favorite element on the plate. 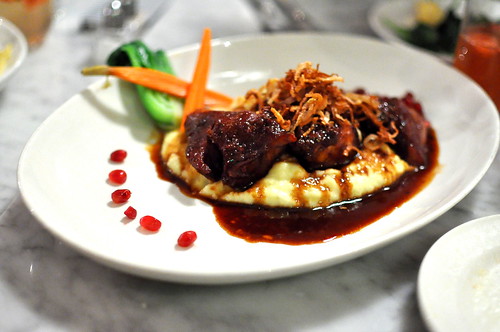 The Astronomer had a soft spot for the braised pork with satsuma sweet potatoes ($22). The pork’s caramelization was unbeatable, while its texture was fork tender (and then some). 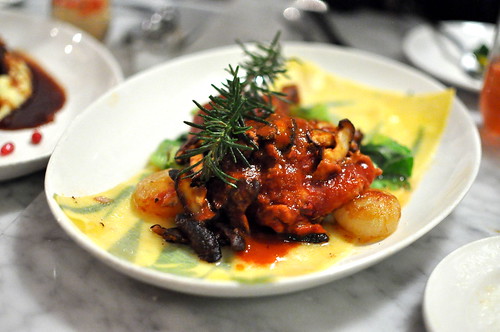 Our final main course of the night was the evening’s special coq au vin with shitake mushrooms. I loved how Chef Minh served the hunks of dark meat atop thin sheets of noodles adorned with herbs. This dish was as pleasurable to eat as it was to look at. 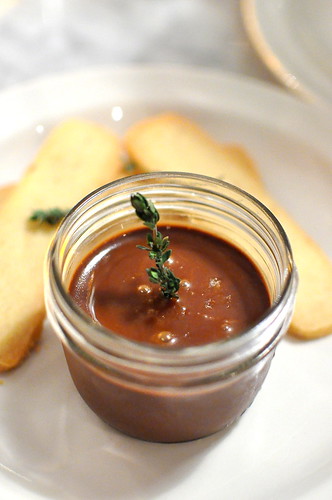 To finish, we shared a Twix candy bar-inspired sweet comprised of chocolate pot de crème, salted caramel, and shortbread cookies ($9). The chocolate lovers at the table found this one decadent, dark, and divinely delicious. 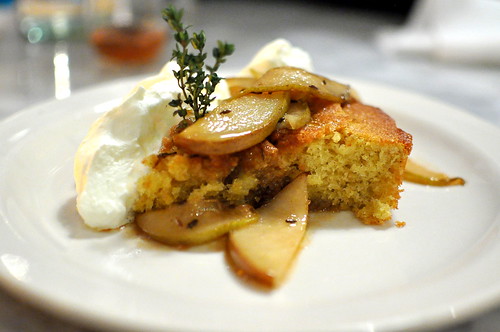 The Astronomer and I, fruity dessert lovers through and through, loved Chef Minh’s cardamom cake with spiced cream and roasted pears ($9). From the cake’s delicate crumb to the pears’ ever-so-slight-snap, there was so much to like about this dessert.

Every neighborhood deserves a casual, unfussy, and tasty place like Beachwood Cafe, but most aren’t fortunate enough to have such a gem. If you happen to reside in or around the Hollywood Hills, I’d jump on this one if I were you. It’ll be worth your while.

There’s more to eat in Hollywood on Gastronomy: