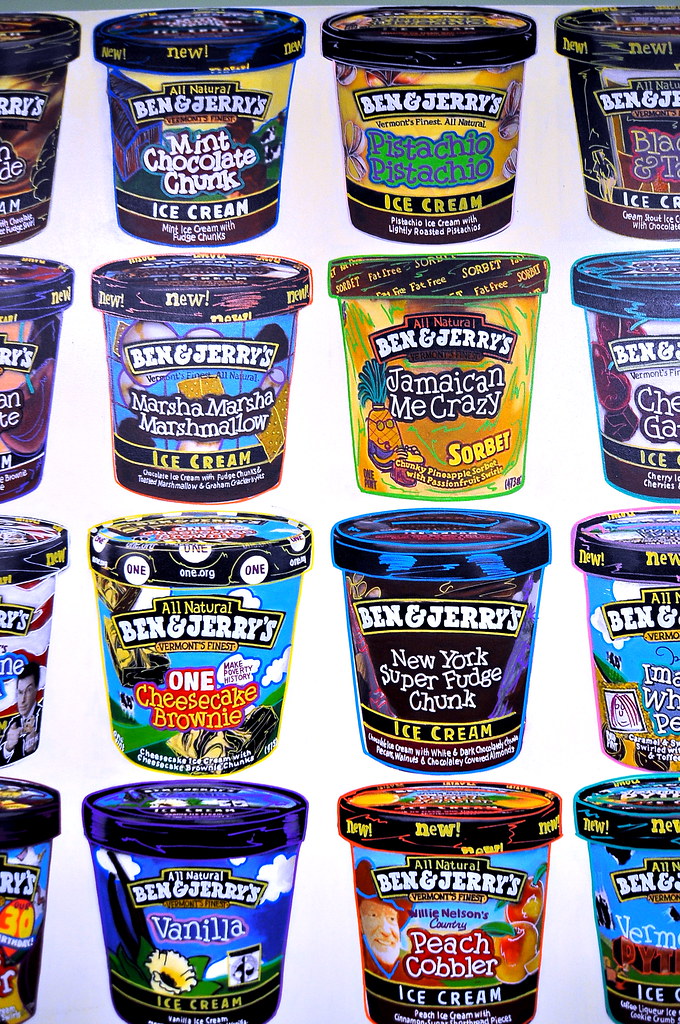 I scream! You scream! We all scream!

I recently traveled to Ben & Jerry’s headquarters in Burlington for a fantastic press trip where I learned about the company’s exceptional ice creams and admirably progressive culture.* As an added bonus, I also explored the awesomeness of Vermont’s food scene. It’s been almost a decade since my last jaunt to this part of New England, so it was beyond great to be back in the land of snow, sleet, and fleece pullovers! 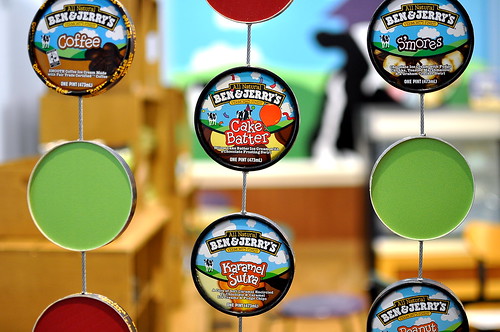 One of the most memorable experiences from the trip was a friendly competition among fellow attendees to create the perfect pint. The winning flavor would be scooped at an ice cream party in the winning team’s hometown. I wanted to take home a victory for L.A.! 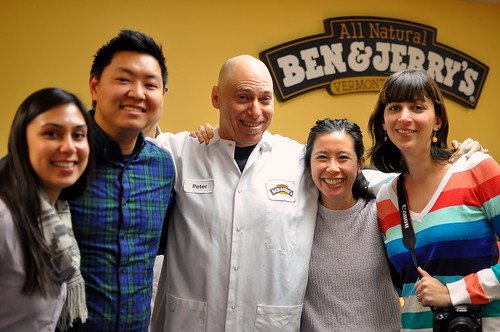 Because birds of a feather tend to stick together, I teamed up with my friends Matt and Nastassia, who also traveled from Los Angeles to be here, and my new friend Erin from San Diego. So Cal, represent! Ben & Jerry’s flavor guru Peter was on hand to lend his expertise. 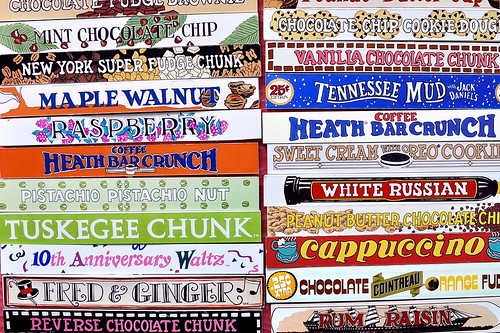 We were inundated with all kinds of wonderful inspiration inside the test kitchen, but our team was most excited to pay homage to the classic combination of coffee and doughnuts. However, rather than create a homogeneous flavor, we were drawn to a Core experience—two different ice cream flavors with a tasty flourish through the center. 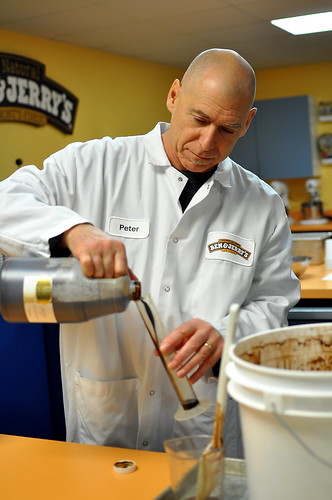 First we set out to make the coffee  ice cream, which entailed combining espresso flavoring with a sweet cream base. We also added shards of dark chocolate, because chunks are what Ben & Jerry’s ice creams are all about! 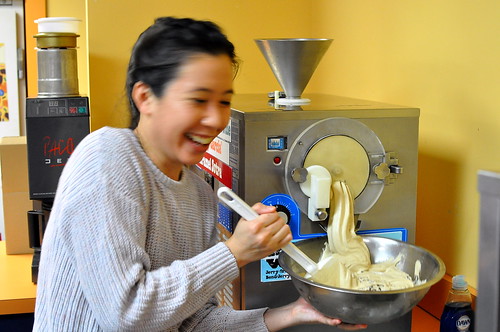 The test kitchen was outfitted with an impressive ice cream maker that was able to churn out the goods in under ten minutes! Mmm, fresh ice cream. 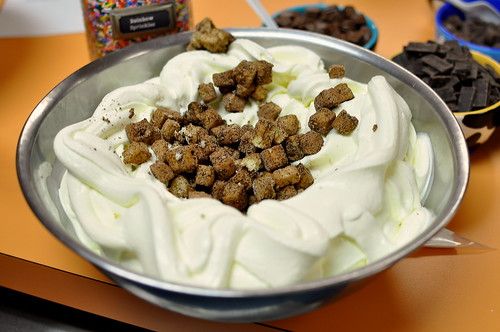 Next, we hacked a doughnut flavored ice cream due to the unfortunate lack of doughnuts on the premises. To approximate the mouth-feel and flavor of deep-fried dough, we used coffee- and rum-soaked lady finger chunks and a good amount of ground nutmeg. Even though the profile wasn’t exactly perfect, our team agreed that it was pretty darn close given the ingredients on hand! 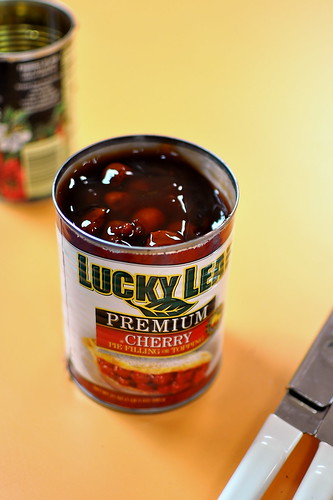 We had to be equally creative with the Core of pretty pink  frosting, combining marshmallow cream with mashed canned cherry pie filling and rainbow sprinkles. Red food coloring would’ve been really helpful, but alas, there was none in the test kitchen. 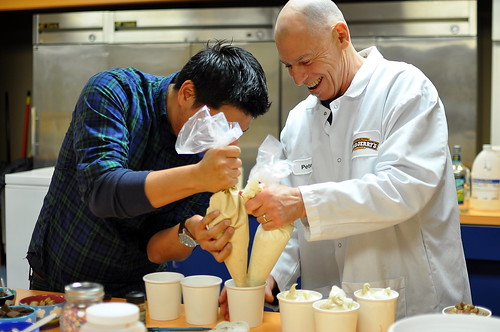 After preparing the Core and both ice cream flavors, each element was carefully piped into pints. 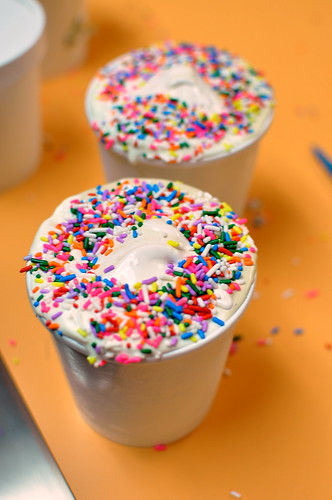 The final touch was a smattering of sprinkles (in the shape of a doughnut) atop each one! We were confident we had a winner on our hands. 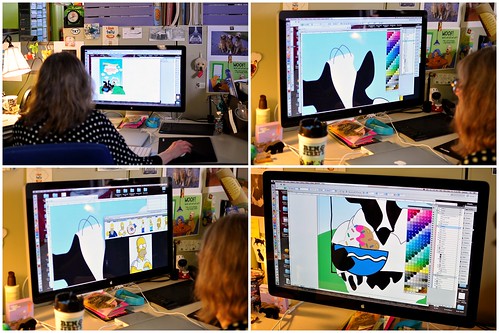 While our pints were firming up in the freezer, we worked with Janice, a talent on the Ben & Jerry’s graphic design team, on our ice cream’s packaging. Keeping things quirky and fun, we channeled the mystique of Homer Simpson, the quintessential coffee and doughnut lover. We outfitted Woody, Ben & Jerry’s official mascot, in Homer’s hair and classic white shirt. 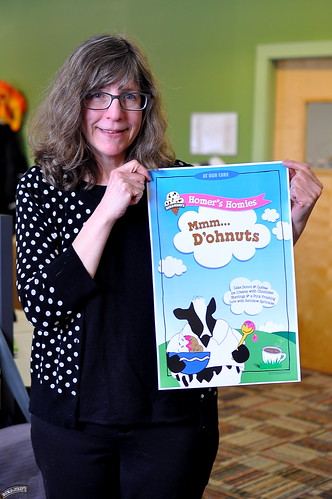 This poster was the fruit of our labor. Thanks, Janice! 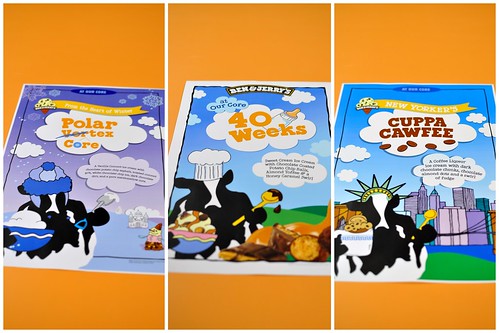 The competition was stiff, but we remained positive. I mean, who doesn’t adore coffee and doughnuts in ice cream form, right? 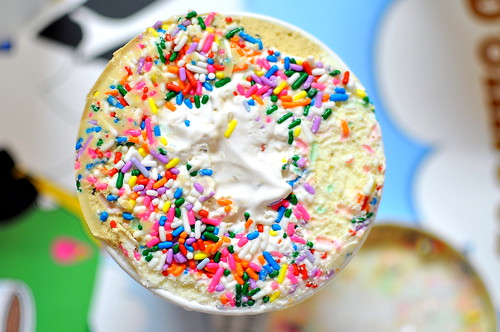 Fresh out of the freezer, our perfect pint. Introducing: Mmm…D’ohnuts—cake doughnut and coffee ice creams with chocolate shavings and a pink frosting Core with rainbow sprinkles. 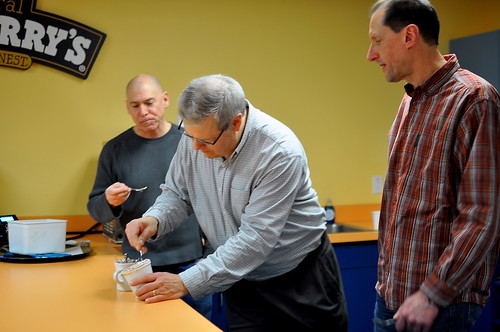 After hearing each team’s pitch and sampling every creation, the judges declared a tie between Polar Cortex and Cuppa Cawfee. Needless to say, Homer’s Homies were crestfallen! Sorry, L.A. We really gave it our all! 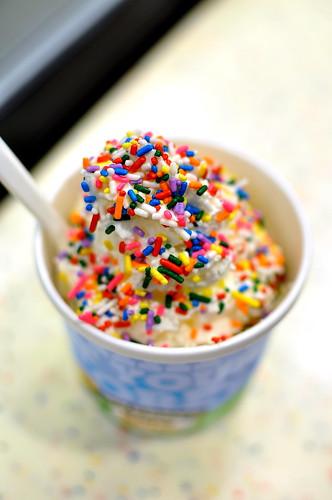 To recover from the devastating loss, we drowned our sorrows in sugar and sprinkles in the form of a Core sundae… 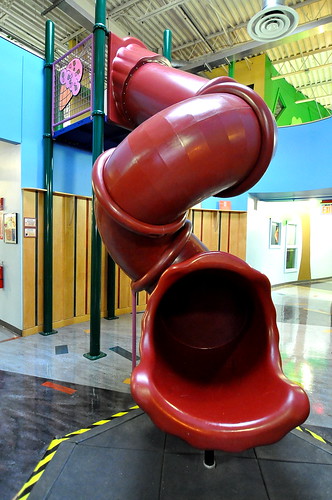 …and took a trip down the communal slide. Losing is never easy, especially when ice cream socials are at stake, but damn, that was fun.

In much happier ice cream news…

SAVE THE DATE: Annual Free Cone Day is April 8! 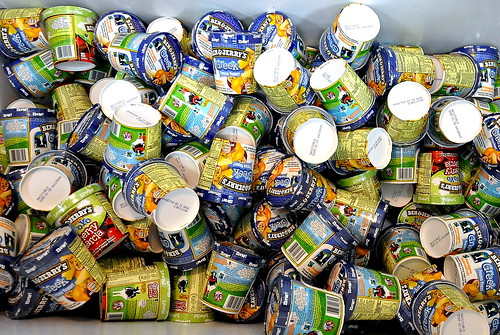 Ben & Jerry’s Scoop Shops around the world will be dishing out free cups and cones to say “Thank You!” This year, Ben & Jerry’s wants to give away more ice cream than ever before, setting a target to dish out more than 1 million cones in the U.S. alone. Treat yourself to a scoop of your favorite flavor or dig into Ben & Jerry’s newest flavors including:

To confirm Free Cone Day participation and hours, make sure to check out the Scoop Shop Locator at BenJerry.com or contact your local Scoop Shop in advance. 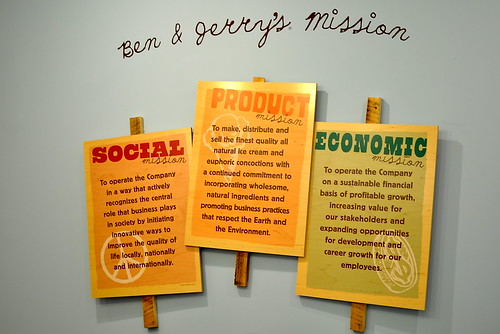 As an aspiring social justice company, Ben & Jerry’s believes in a greater calling then simply making a profit for selling its goods. The company produces a wide variety of super-premium ice cream, yogurt and sorbet using high-quality ingredients. Ben & Jerry’s incorporates its vision of Linked Prosperity into its business practices in a number of ways including a focus on values-led sourcing. In 2014 the company plans to complete its transition to using entirely non-GMO (genetically modified organisms) ingredients by source as well as to fully Fairtrade-certified ingredients wherever possible, which benefits farmers in developing countries. Ben and Jerry’s products are distributed in 35 countries in supermarkets, grocery stores, convenience stores, franchise Ben & Jerry’s Scoop Shops, restaurants and other venues. Ben & Jerry’s, a Vermont corporation and wholly-owned subsidiary of Unilever, operates its business on a three-part Mission Statement emphasizing product quality, economic reward and a commitment to the community. Ben & Jerry’s became a certified B Corp (Benefit Corporation) in 2012. The Ben & Jerry’s Foundation’s employee-led grant programs totaled $2.5MM in 2013 to support economic and social justice, environmental restoration, and peace through understanding. For the inside scoop on Ben & Jerry’s visit BenJerry.com.