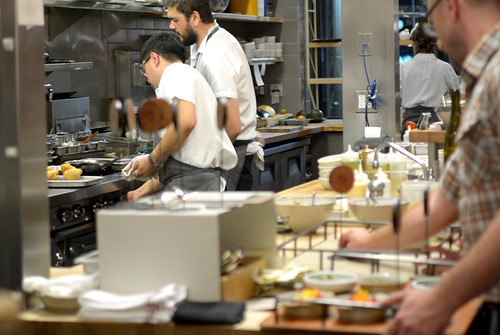 State Bird Provisions came across my radar back in 2012 when Bon Appetit named it the Best New Restaurant in America. Owned and operated by chefs Stuart Brioza and Nicole Krasinski, the restaurant is most notable for serving inventive small plates on dim sum-style carts and trays. 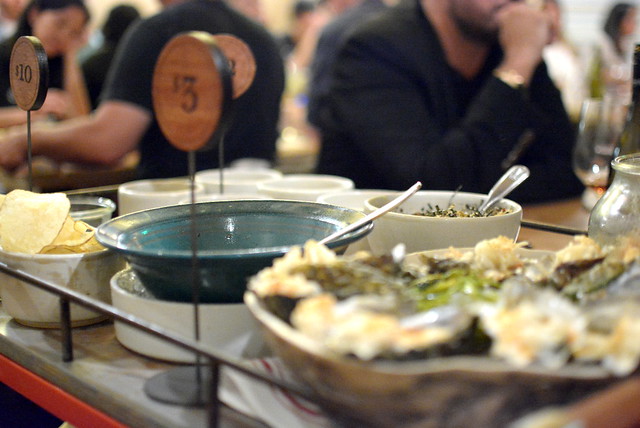 While State Bird’s service model sounded a little gimmicky, I was intrigued enough by the menu to make reservations while in San Francisco for a digital conference last fall.

Even though it’s been a minute since the restaurant was lauded by Bon Appetit, reserving a table at a decent hour is still quite competitive. A little good press goes a long way. 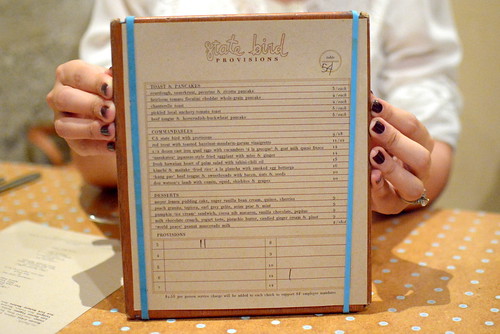 The food started rolling by as soon as my dining companions and I settled in. In true dim sum fashion, hash marks were added to our “bill” as we selected various items from the carts and trays. 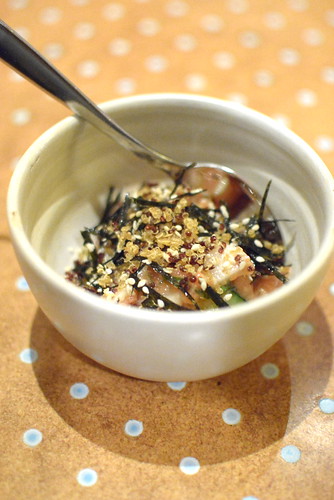 From the roving raw bar, we chose the salmon tartare with quinoa and furikake. The serving was itty bitty but the flavors were on point. 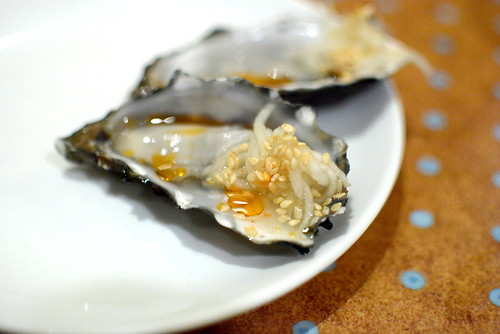 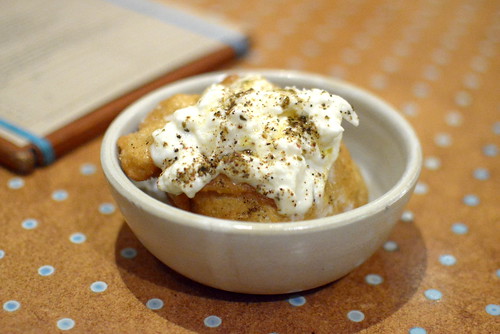 The garlic bread with burrata ($9) was as delightful as hoped. Because this item arrived from the kitchen rather than from a cart, the base was properly warm and crisp while the cheese was cool and oozy. 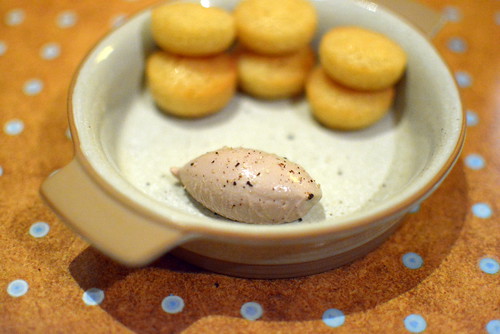 The duck liver mousse with almond biscuit ($6) was surprisingly dainty. 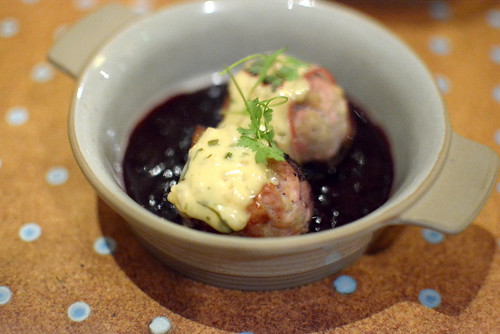 And then there were rabbit meatballs wrapped in prosciutto with a balsamic vinaigrette, which arrived lukewarm, sadly. The dim sum model is good fun until less-than-hot food arrives on the scene. 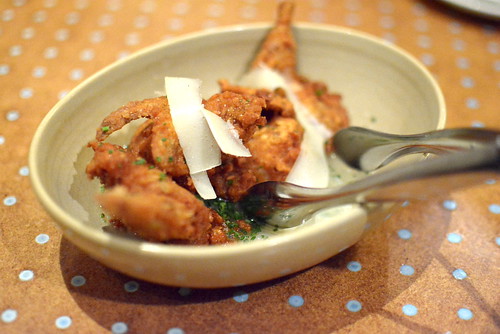 My favorite dish of the night was the restaurant’s signature and namesake dish ($18)—Wolfe Ranch quail dusted in a mixture of pumpkin seeds and breadcrumbs, deep-fried, and served alongside an onion “jam.” So. Very. Delicious. 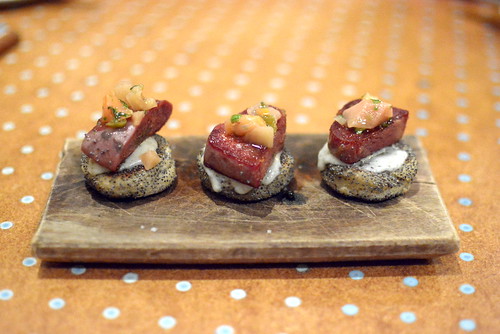 Another fantastic bite was the “everything buckwheat-beef tongue pastrami pancake” ($5 each). 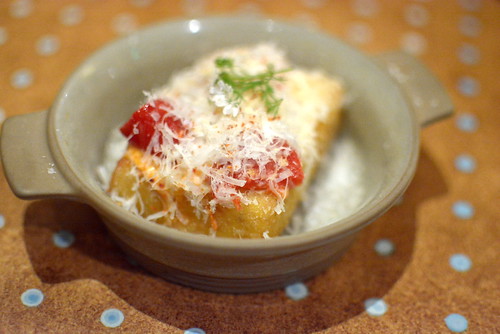 The polenta was straightforward and mostly forgettable in a sea of dynamic bites. 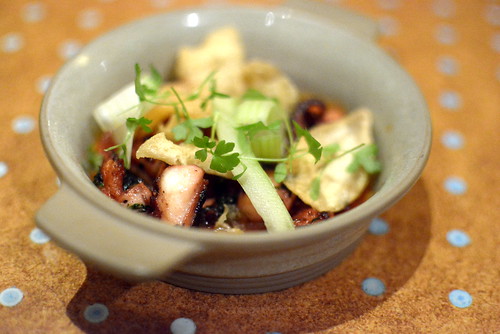 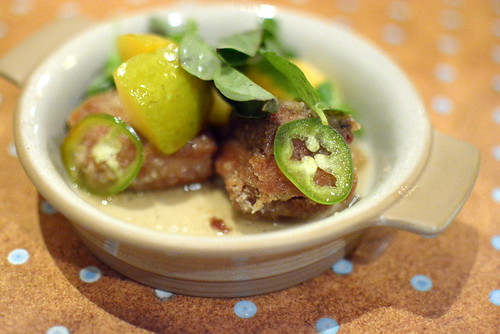 We closed out the savory portion of our meal with a duo of hits. The crispy pork belly with Vietnamese vinaigrette, jalapeño, and pluots was well balanced and served at the proper temperature. 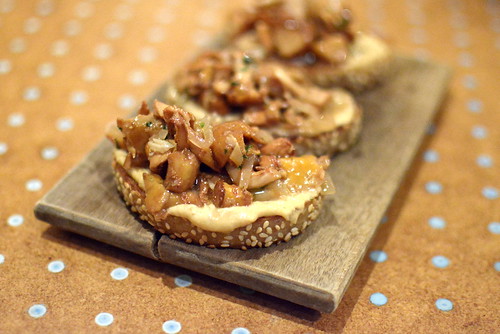 The chanterelle toast ($5 each) was so, so rich and fantastically savory. 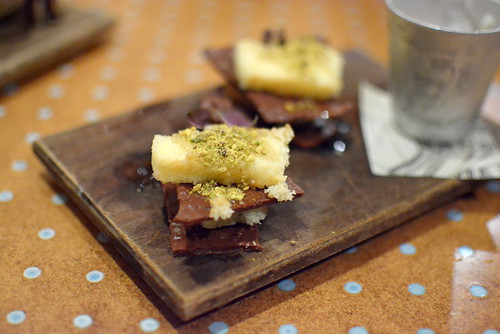 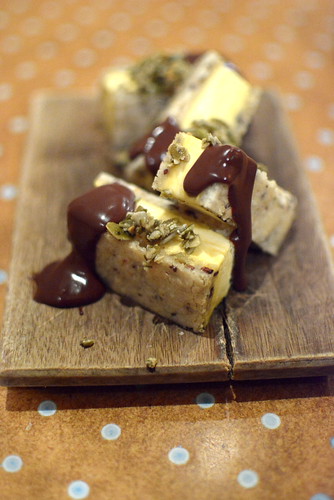 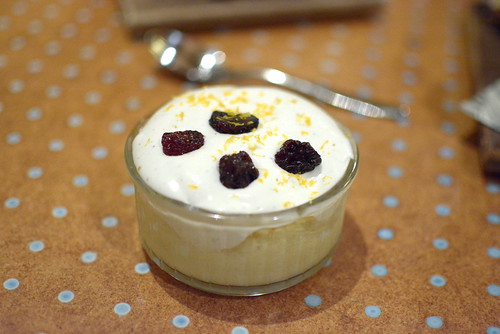 And finally, a Meyer lemon pudding cake with “super” vanilla bean cream, quince, and cherries ($9). Light and tart and solid. 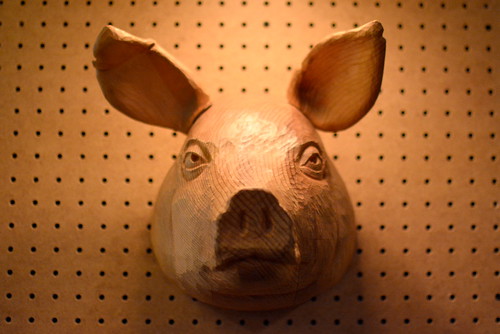 Dinner at 2012’s best new restaurant had its ups and downs, but for the most part, we left satisfied. Interestingly, the dishes ordered from the menu and delivered straight from the kitchen fared better than those fetched from the cart and trays, which made us question whether the dim sum delivery system added any value other than novelty. Take away the bells and whistles, and all that’s left is a cute little spot serving inventive small plates.

Previously in the City by the Bay…