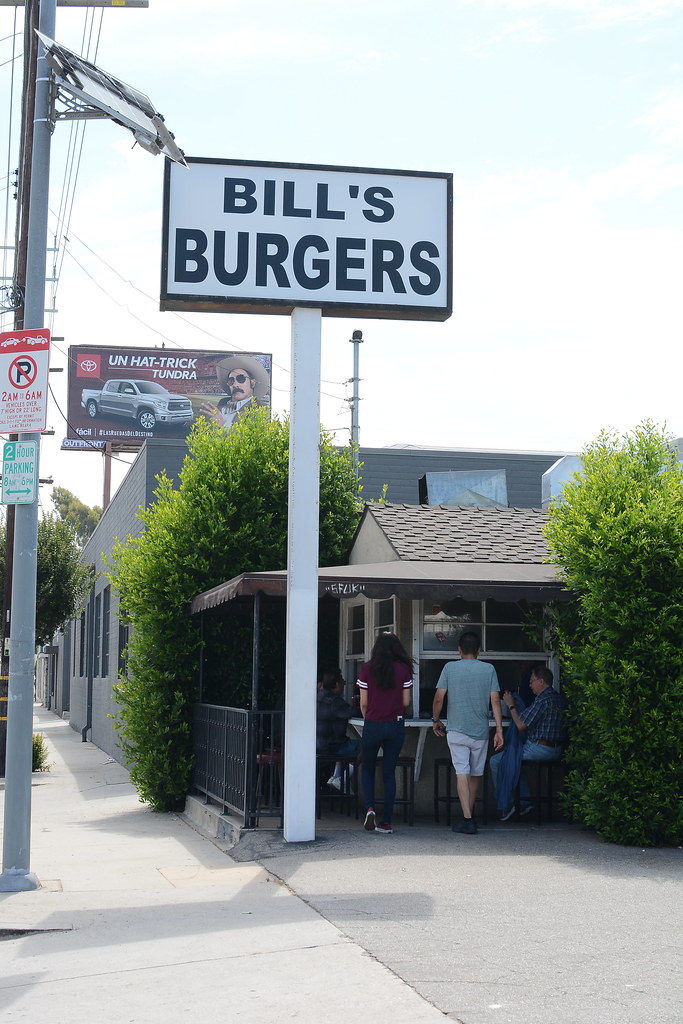 Bill Elwell has been plugging away on the flattop grill since he bought this Van Nuys burger stand in 1965. Regulars from the early days know it as Bill’s Hamburgers, while newer fans refer to it as Bill and Hiroko’s. The latter addition is a nod to Hiroko Wilcox, Bill’s lovely wife who helps him run the place. Grab a seat at the L-shaped counter to watch the master at work—the best spots are the two stools closest to the grill. Patio seating away from the meat and grease is also available for those who prefer some solitude with their lunch. With hamburgers, sandwiches, and hotdogs on hand, the menu is extensive for a two-man show but not overly so. Most everyone orders a burger. Bill’s signature burger ($4.20) is a simple but immensely satisfying creation padded with iceberg lettuce, a thin slice of tomato, a couple of dill pickles, chopped onions, and mayonnaise. Commercial buns are toasted till crisped and browned, while patties are cooked all the way though. Thick slices of American cheese and additional meat patties can and should be added to build a better burger. I regret not making mine a double. While Bill’s signature burger is a simple and satisfying creation, it’s his double-decker patty melt that deserves your attention. Two slices of rye are buttered and griddled ‘til crisp-golden, while a duo of patties are cooked all the way though. Thick slices of American cheese and a smattering of chopped and grilled onions add the finishing touches. Meat, cheese, bread, onions…what more do you really need?

Bill’s Burgers is open Tuesday through Friday from 8:30 a.m. until 4 p.m. To learn more about the man behind the flattop, check out his profile on Eater LA.