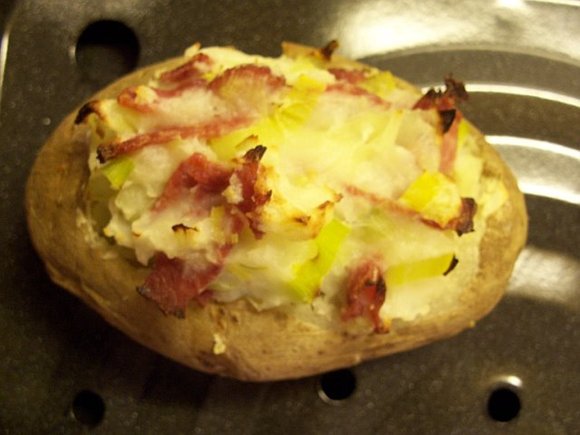 Piping the filling into the potato shells with a pastry bag makes an attractive presentation. You can also just spoon in the filling and crosshatch the top with the tines of a fork.

Spoon about 3/4 of mixture into shells, dividing evenly. Transfer remaining potato filling to pastry bag fitted with large star tip. Pipe filling atop potatoes. Place potatoes on baking sheet. (Can be made 1 day ahead. Cover loosely with plastic wrap and refrigerate.)

Position rack in center of oven and preheat to 375°F. Bake potatoes until filling is heated through and tops brown, about 20 minutes.

Substitutions: The original recipe does not include leeks or turkey bacon and instead calls for chives. To make the potatoes more of an entree rather than side, I decided to add the meat. I did not find it necessary to rub the potatoes with oil. Used 1% milk instead of half and half. Skipped the butter. Instead of baking them for 45 minutes in the oven initially, I put them in the microwave for 25 minutes. I spooned the mixture into the potatoes because I did not have a pastry bag or tip.