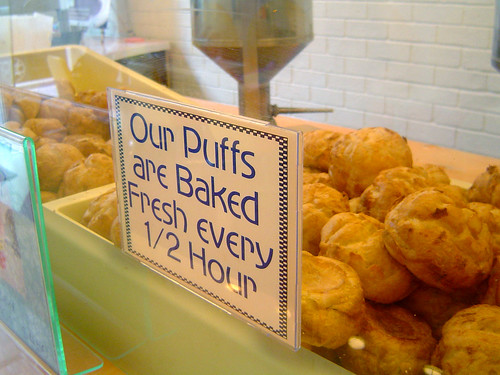 Beard Papa’s was introduced to me by my Hawaiian friend Liana. The restaurant is a Japanese import that has been in Hawaii for a while and is being franchised across the land. I can’t wait for it to expand to San Diego and Philadelphia. Until then, I will have to keep frequenting the NYC location.

I have been to Beard Papa’s a couple of times and always order the same thing, the eclair cream puff ($1.85). It’s divine and cheap. The chocolate is layered on super-thick and the custard inside is creamy and full of vanilla flavor. The puff is a bit chewy (in a good way), so spurting cream sometimes happens. Just ask the sidewalk outside the store.

The Astronomer ordered the Cheesecake Stick. He said, “it’s mild.” I had one bite and considered not swallowing. A mild cheesecake is a boring cheesecake. The recipe needs more CHEESE! But hey, it cost a buck.