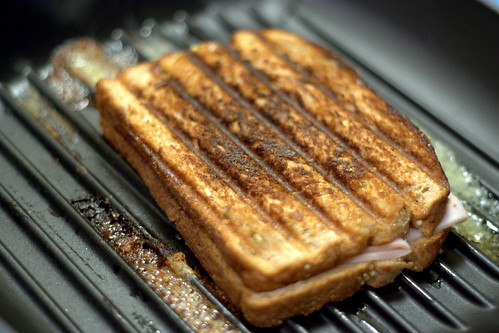 My co-worker Ricky and I went to Paninoteca for lunch. We both ordered sandwiches and had them wrapped up “to go” so that we could enjoy them in Rittenhouse Square. I ordered the Smoked Salmon and Ricky chose the Honey Roasted Turkey.

Unfortunately, the chef’s vision couldn’t be fully actualized during my visit because Paninoteca ran out of black bread. My sandwich was made on a baguette instead. Other than that minor technicality, my sandwich totally rocked. The size of the sandwich was surprisingly robust, the greens were tossed in a light vinaigrette, the hummus was on point, and the smoked salmon was excellent. The baguette held the contents in nicely and had a lovely, chewy texture. All the ingredients worked together very well. My only complaint was that the ratio of greens to salmon was 10:1, so I had to eat the salmon separately to fully take in the flavor. While I never thought I’d ever say this, perhaps the sandwich could use less greens in the future.

Ricky’s choice was definitely a panino. Grill marks? Check. Melted cheese? Check! I only had one bite of the Honey Roasted Turkey and thought that it was a good combination of flavors overall. Ricky thought that the relish could’ve used more sugar. I thought the panino could do with less relish because the tartness of the pears and cranberries overwhelmed the milder flavors such as the onions and turkey.

Paninoteca is a delicious establishment, but with so many eateries in Center City, I probably won’t return anytime soon. Ricky on the other hand said he would definitely return to try some other offerings.

One thought on “Paninoteca – Philadelphia”