The dessert offerings at Audrey Claire were a bit lacking, so the Marathoner and I went to the Naked Chocolate Cafe to satisfy our sweet tooth. I ordered the Peanut Butter Nudo ($2), while the Marathoner had a petite bittersweet hot chocolate ($3.50). Both treats were delightful!

The nudo, which is unique to Naked Chocolate according to the woman behind the counter, had a soft and chewy texture. Although the nudo is described as brownie-like, I would say that the two desserts are very different. The nudo’s texture is definitely special. The pyramid shape was cute and enhanced the dessert’s presentation. 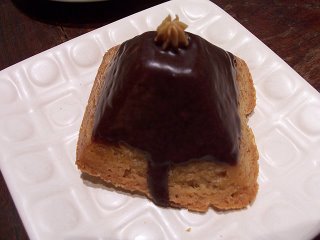 My only complaint was that the nudo was made with Jif, which is not a real peanut butter (N.A.R.P.B) that contains hydrogenated oils. Sigh. I have a weakness for peanut butter desserts, so I let this tremedous flaw slide on my visit. But in the future, I’ll probably have to stick to the non PB treats due to my fear of trans fats.