The Astronomer, Luscious (introduction to come), Colton (see White Dog Cafe), Eve (Colton’s girl), and I met up at the Reading Terminal Market for an impromptu lunch last weekend. With so many choices available, we decided the best plan would be to split up, buy our food, and meet up at the Beer Garden to chow together. The Beer Garden was Colton’s idea. Even though I frequent the market often for fresh produce at Iovine Brothers, I rarely patronize other vendors. I took this opportunity to try Little Thai Market. I’ve been scouring message boards and food websites trying to find decent Thai food in Philadelphia ever since I moved into town and had heard good things about this place. I ordered a Vegetarian Pad Thai ($5) because it is my favorite. The woman behind the counter tonged up some pre-made “plain” Pad Thai (noodles with sauce and tofu), tonged in some pre-stir fried vegetables, then popped the bowl in the microwave. After she nuked it, she added some fresh bean spouts, steamed broccoli, peanuts, and a lime wedge on top and passed it on to me. 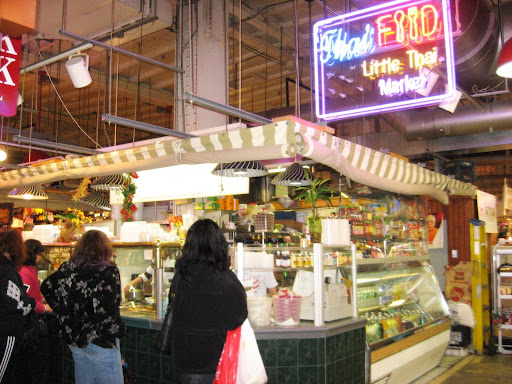 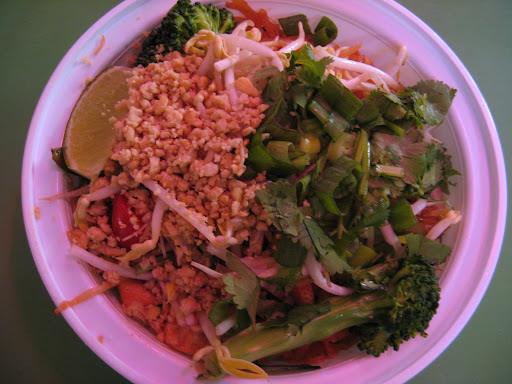 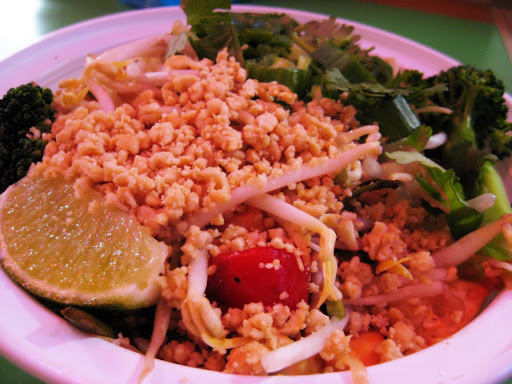 The Pad Thai wasn’t horrible, just incredibly tasteless. The subtle sweetness and tanginess that makes Pad Thai delicious were completely absent. The flavors that were present stood out independently because the ingredients never melded during the cooking process. Nuking does not count as cooking.

Colton and Eve had a much better dining experience at The Original Turkey. Eve ordered the Turkey Platter ($8) consisting of roast turkey and three sides, while Colton opted for the Turkey Sandwich ($7). Colton enjoyed the sandwich very much; his favorite parts were the plentiful mayonnaise and turkey. Eve liked her Thanksgiving platter too–she said that the turkey was cooked very well and was tender and moist. Colton agreed, but thought the stuffing was too dry and the sides in general were unspectacular. Eve generally likes canned cranberry sauce, but didn’t care too much for the stuff dished up on her platter. She also mentioned that the lettuce leaf garnish was a nice touch, but not necessary and kind of took over the cranberry sauce. The gravy’s texture was not too runny, salty, or gel-like which suited Eve well. 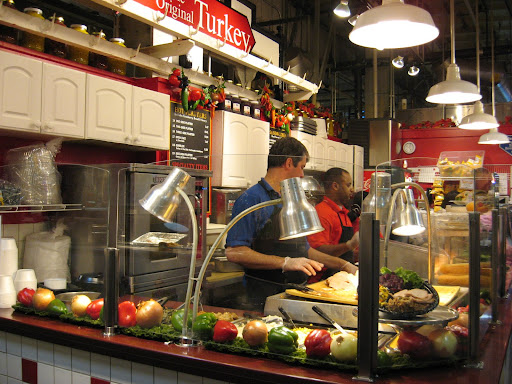 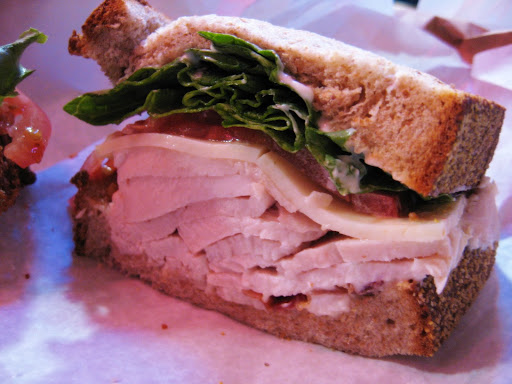 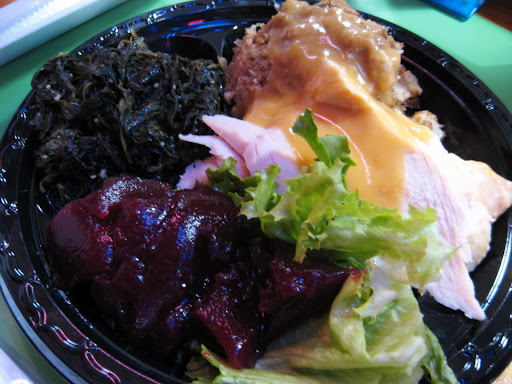 The Astronomer headed over to Profi’s Creperie for a chicken and spinach crepe with pesto ($5.55). I had a couple bites and thought that it was fairly decent, but nowhere near as wonderful as the crepes served up at Beau Monde because the crepes at Profi’s are made with white or wheat flour rather than the traditional buckwheat. There was plenty of chicken and spinach (perhaps too much spinach for the Astronomer’s taste), but the pesto was faint. The Astronomer liked his choice and washed it down with some beer. 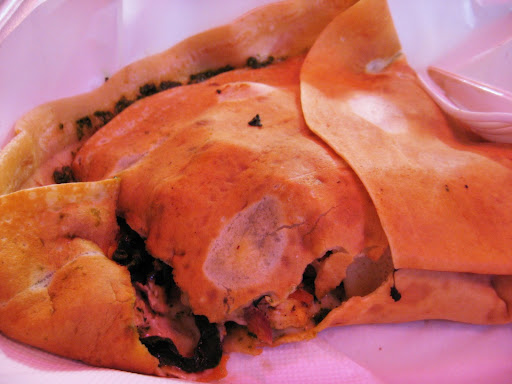 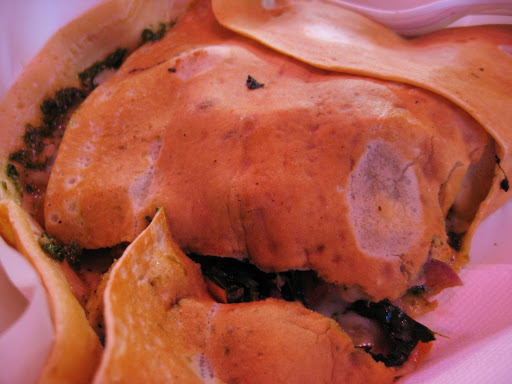 My friend Liana, who I refer to as Luscious, is visiting for a week from Hawaii. She picked up lunch at Mezze and Le Bus Bakery. From Mezze she chose three antipasto–marinated fresh mozzarella, marinated olives, and some Moroccan chicken. My friend is a foodie of few words. She said the antipasto were “not bad,” which basically meant they were good, but didn’t wow her. The almond croissant she picked up at Le Bus was dry and disappointing. She finds the almond croissants at Metropolitan Bakery vastly superior. 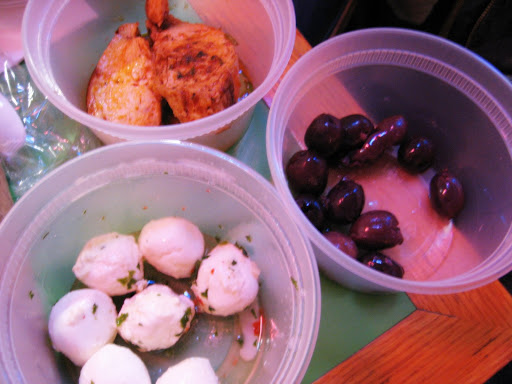 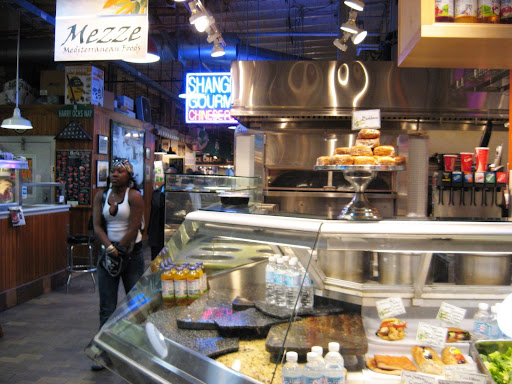 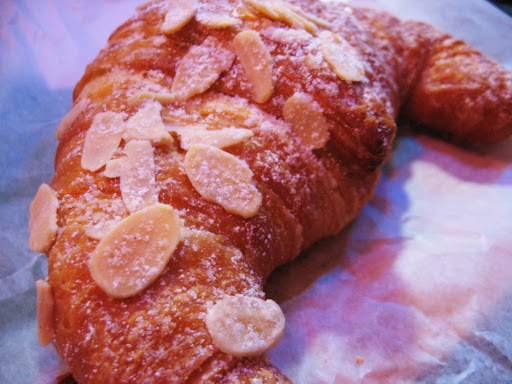 The selection of food available at the Reading Terminal Market is impressive, but the quality of some vendors is lacking. DiNic’s is far and away the best eatery in the market.