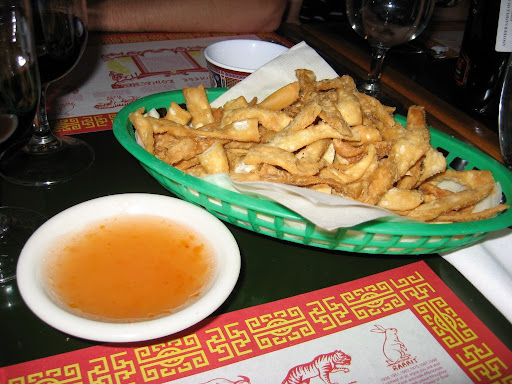 When I recently discovered that no less than three of my friends in the Philadelphia area have birthdays during the same week as mine, plans for a joint celebration began to materialize. It was of course essential that the gathering involve amazing food, so I began researching possible destinations. I wanted to try somewhere new, preferably a reasonably priced BYOB. After much thought, I settled on a restaurant that The Gastronomer and I had long been yearning to try: Mama Palma’s Gourmet Pizza. We had heard nothing but good things about the food, although I did read some rather alarming comments in customer reviews concerning the service. “No matter,” I thought, “We’re a carefree and considerate group, and besides, we’ll probably be drunk. It won’t matter if the waitress is a little grouchy.” How wrong I was.

Mama Palma’s does not take reservations, so The Gastronomer stopped by early in the evening to sign us up for a table at 7:30. When the hour came, several members of our party were late to arrive, and we were informed that only full groups could be seated. Fair enough. It’s a small restaurant—it makes sense that they wouldn’t want to waste space by seating incomplete parties. Finally everyone arrived. The Gastronomer went inside and informed the hosts that our party would include 9 people, rather than 8 as we originally had expected. They grudgingly marked off the 8 on the list and wrote a 9. It became clear that reserving a table early in the evening had been futile, as they were not going to actually place us in line for a table until we were all present. We asked for an expected wait time and were told 15 minutes.

Two or three times during the next hour one of us cheerfully asked how the prospects were looking for being seated. We were alternately ignored or greeted with a tone of acute annoyance. Some in their hunger wondered whether we should just screw it and head over to the Irish Pub, but in general our spirits remained high. We could tell that there was one particular table that they wanted to seat our party at, and it looked like the current occupants would be gone before long.

Finally, at almost 9:00 we were called inside. The table had been set with 8 chairs. “Oh, remember, we have 9… it’s okay, we’ll just pull up a chair.” At this point the manager stormed out of the kitchen and basically screamed at us: “You can’t pull up a chair. I won’t put up with this any more! Either one of you leaves, or you don’t eat here!” We briefly protested: “Come on, be reasonable… there’s plenty of room… we’ve been waiting so long…”, but the response was absolutely not. He seemed to genuinely think that we would send a friend home so that the rest of us could stay and enjoy the pizza. I offered to share a seat with The Gastronomer, but to no avail. We headed for the door. In the shuffle The Gastronomer left her purse hanging on a chair, and I had to awkwardly squeeze by the raging manager to get around to the far side of the table and retrieve it. I felt a legitimate fear that he might deck me with a right cross. Some of the younger employees looked uncomfortable and apologetic but obviously feared for their jobs if they should speak up.

As frequent readers of the site will have noticed, I generally come away with good impressions of most every place that I eat at, but I am truly appalled by Mama Palma’s. This is the first time I can remember having walked out of a restaurant without even being seated because the service was so bad. Seriously, don’t go eat there. Tell your friends not to eat there. The pizza is probably terrific, but it is absolutely not worth it. There are too many restaurants in Philly that offer delicious food AND great hospitality for them to be able to get away with that crap. Several members of our party thought up creative means for revenge, but we’re a classy bunch, so it’s unlikely any will be carried out.

When we had finished being rudely booted from our chosen birthday dinner destination, we were left with a dilemma. It was doubtful that any of the tasty BYOBs in the vicinity would be able to seat such a large party on a Friday night with no advanced notice, but we had little choice but to wander the streets in search of a restaurant willing to take us in. It was looking increasingly likely that we would end up celebrating at the Fox and Hound. As we passed Rittenhouse Square, someone said off-handedly, “Maybe we should just get Chinese food.” As we have already established, I LOVE Chinese food (see Susanna Foo), so of course the answer was a resounding yes. We ducked into a restaurant called Szechwan Hunan. It was practically empty, and they quickly moved several tables around so that we could all sit together. What fantastic service! I was blown away. They also provided menus, a bottle opener, glasses for both wine and water, and unlimited refills of their delicious wonton chips with duck sauce. It was almost as if they were genuinely grateful for our patronage.

As everyone began to order, the mood lightened noticeably. We were finally going to get to eat. I’m always torn when I go to Chinese restaurants between ordering one of my proven favorites (mostly chicken with sweet sauces: sesame, orange, lemon, etc.) and trying something new. This time I was feeling adventuresome, so I went with a dish called the Bird’s Nest. The “nest” turned out to be made of pan-fried noodles and contained chicken, peppers, and other vegetables. Strangely, the whole thing rested upon a bed of iceberg lettuce. The dish was satisfying, but not as flavorful as some of the better Chinese items I’ve had, and the crispy noodles were rather awkward to eat. In the end, I’d probably be happier sticking to my old standbys. To its credit, the Bird’s Nest was enormous, and I found the leftovers much easier to eat after the noodles softened up overnight.

The Gastronomer ordered a tofu dish with a variety of vegetables in a savory Szechwan sauce, which she found quite enjoyable. It was mildly spicy and came in a generous portion size. Like the Bird’s Nest, the dish tasted better the following day after the tofu softened.

The food at Szchewan Hunan is high quality, but falls short of truly outstanding. In any case, they managed to save the evening for us, and for that I am extremely grateful. If I have another opportunity to order Chinese food before leaving Philadelphia, I will certainly consider them.