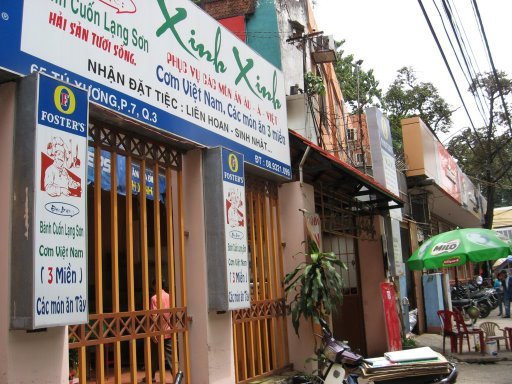 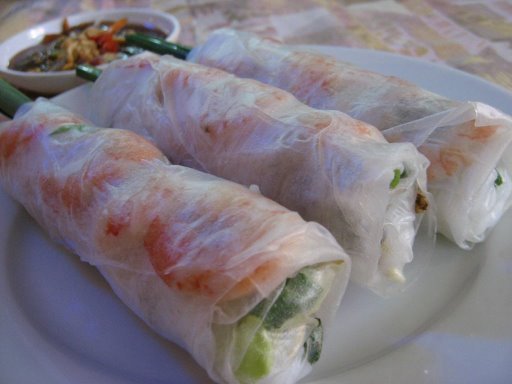 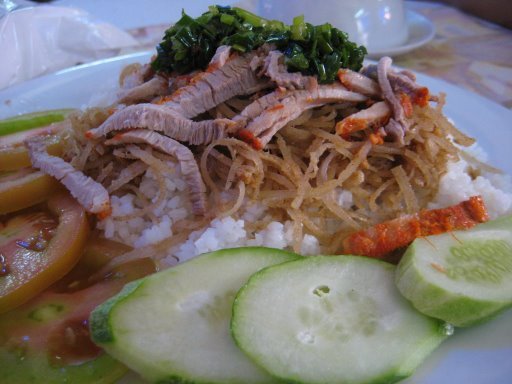 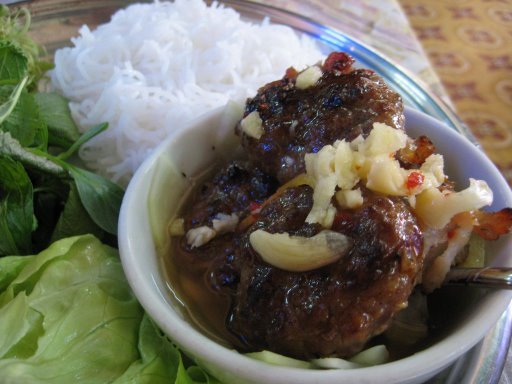 Xinh Xinh is one of a handful of restaurants neighboring our office on Tu Xuong Street. Our colleague Binh recommended that we try the eatery for lunch on our first day of work.

Unlike the majority of restaurants in Saigon, Xinh Xinh has an extensive menu spanning 10+ pages. Besides being 9 pages too long, the other strange thing about the menu was the lack of prices on certain items. This sort of situation sometimes occurs in American restaurants on dishes affected by market forces, such as lobster and is generally denoted “M.P.” However, I don’t think that was the case here. Perhaps after a few more visits I’ll figure out their pricing scheme.

The Astronomer and I both ordered from the section of the menu without prices and hoped for the best. He had the com tam bi, while I had bun cha. Both items were superbly prepared and actually priced lower than the other items on the menu. The pork in the bun cha was seasoned well with nouc mam, sugar, salt, and other spices. Combined with the cool noodles, herbs (mint, lemongrass, basil), and nouc mam vinaigrette, the dish really hit the spot.

The Astronomer enjoyed his com tam bi as well, but as usual was left unsatisfied due to his enormous appetite. To supplement our entrees and to avoid leaving hungry, we ordered three spring rolls. The goi cuon was extremely fresh and contained lots of little shrimps, which I appreciated because the goi cuon in the states always contain wimpy shrimps sectioned in half. Xinh Xinh’s spring rolls are definitely the best ones we’ve had in Saigon thus far.