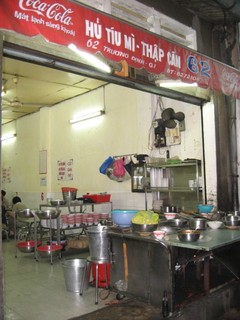 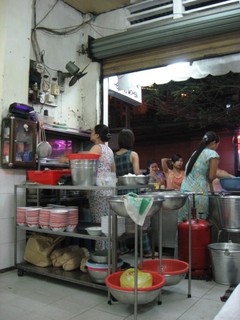 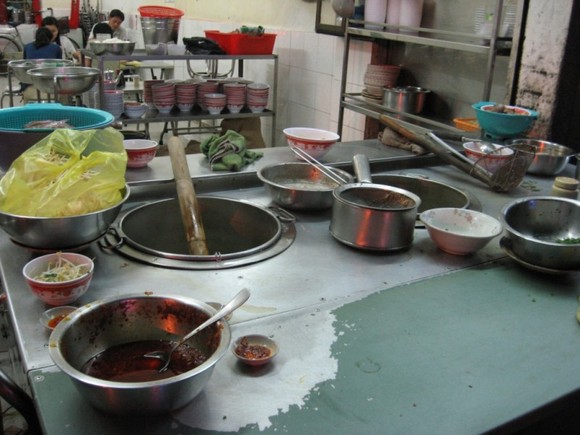 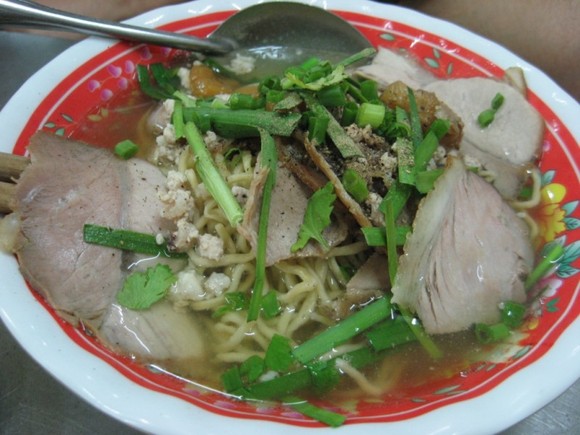 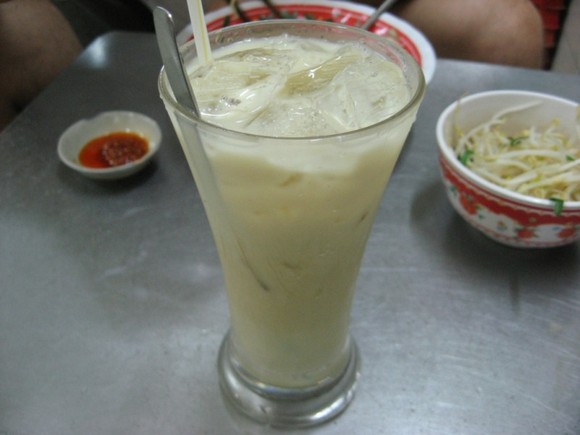 The Astronomer: As The Gastronomer noted earlier, our first few meals in Vietnam took place at pretty chain restaurants and were relatively low on the adventure scale. However, it was only our second full day in the city when hunger forced me to branch out. This is not surprising: hunger is the motivating factor behind a great many of my decisions.

My banh cuon portion at Banh Cuon La had been pitifully meager—a dish scarcely adequate as an appetizer for a growing American boy—so I wandered the streets in search of supplemental nutrients. Having already spent well over a dollar for my first course, I would settle for nothing less than a good deal.

For some reason, The Gastronomer and I were drawn to a plain-looking noodle shop located a block from our hotel. I lowered myself onto an 8-inch high stool, crouched over the foot-high table, and ordered a bowl of hu tieu mi—yellow noodles with slices of pork, ground pork, chives, and green onions in a savory pork broth. The noodles hit the spot; the broth was expertly seasoned and the pork added substance but was unspectacular. There were several ingredients in the soup that I could not identify—an experience that would be repeated often in the coming weeks.

Within 15 minutes or so, I had developed a back ache from bending over the small table. Fortunately, I have since learned to enjoy meals served on miniature furniture without experiencing discomfort. All-in-all, I found the dish quite satisfactory—future noodles would surpass the mi in terms of pure deliciousness, but my first experience was good enough to encourage me to delve further into the world of hole-in-the-wall restaurants and street food in Saigon.

The Gastronomer: As The Astronomer sweated his ahem-off eating a bowl of hot noodles on a balmy night, I sipped a cool glass of sua dau nanh—a sweetened soy milk popular in Vietnam. After soda chanh, sua dau nanh is my second favorite cooling drink.