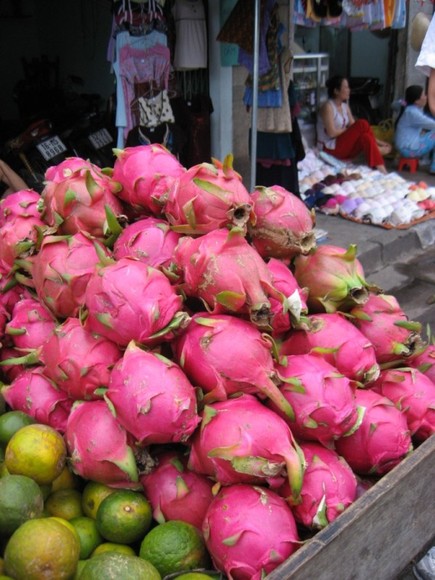 The pitaya (also known as pitahaya, dragon fruit, huǒ lóng guǒ (火龍果/火龙果), strawberry pear, nanettikafruit, or thanh long) is the fruit of several cactus species, especially of the genus Hylocereus, but also see Stenocereus. Native to Mexico and Central and South America, these vine-like epiphytic cacti are also cultivated in Southeast Asian countries such as Vietnam, the Philippines, and Malaysia. They are also found in Taiwan, Okinawa, Israel, and southern China. The pitaya only blooms at night; they are large white flowers that are often called Moonflower or Queen of the Night.

Thanh long is hands down the most visually arresting fruit in all of the land. However, its taste is nowhere near as spectacular as its appearance. Underneath the magenta skin lies the fruit’s white flesh, which is full of tiny, edible seeds. Thanh long tastes similar to a kiwi, but its sweetness is one-dimensional and lacks any sort of tartness. Consuming the entire fruit at once bores my taste buds, so salads are the way to go for enjoying this particular piece of vegetation.