Toro with Octopus and Caviar For my final dinner in San Diego, my mom took me to Zenbu in La Jolla. As I perused the extensive menu not knowing what to order, I was reminded of an article I read in the New York Times last summer. In a piece by Trevor Corson entitled “Sushi For Two,” he recommended a new approach to eating sushi in America:

I suggest that customers refuse to sit at a table or look at a menu. We should sit at the bar and ask the chef questions about everything — what he wants to make us and how we should eat it. We should agree to turn our backs on our American addictions to tuna (for starters, try mackerel), globs of fake wasabi (let the chef add the appropriate amount), gallons of soy sauce (let the chef season the sushi if it needs seasoning) and chopsticks (use your fingers so the chef can pack the sushi loosely, as he would in Japan). Diners will be amazed at how following these simple rules can make a sushi chef your friend, and take you on new adventures in taste.

It was a little weird having a conversation with the chef right off the bat about how much we wanted to spend ($70 total) and our favorite fruits of the sea (toro, eel, lobster), but in the end, it was absolutely worth it. My mom and I conversed with our chef Lee throughout the meal about himself and the food, and in return, he took excellent care of us.

Lee started us off with two delicate cuts of tuna and yellowtail paired with a seaweed salad—my mother received sashimi (her request), while I received nigiri (my request). Eating sushi without chopsticks was really something different; the rice and fish felt so delicate between my fingers. The seaweed salad was light and refreshing.

The next course was my mom’s favorite. The toro was luxuriously buttery and melted in our mouths, while the octopus and caviar contrasted texturally to the fish. Just a smidge of soy sauce was all this piece needed to really come together. 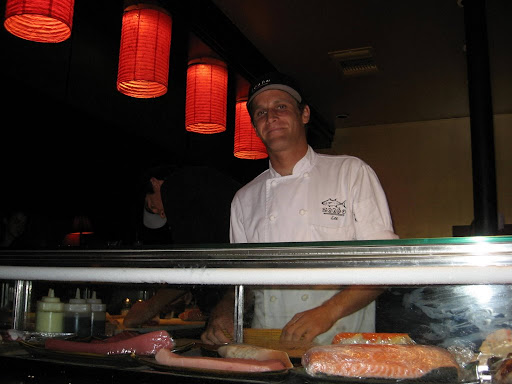 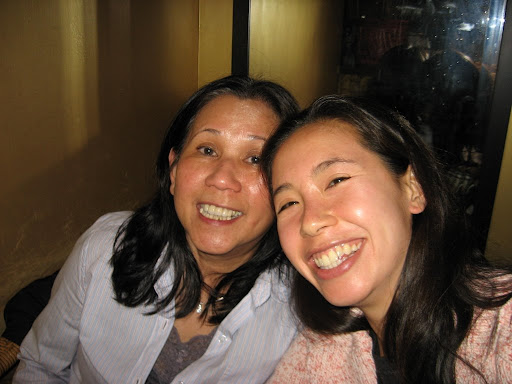 After a brief intermission, Lee brought out the first warm course of the evening. A roll comprised of panko-crusted, deep fried hamachi, crab, avocado and unagi served with a sweet sauce. The warm, crisp hamachi was a great substitute for traditional sushi rice, but dominated the unagi’s subtle flavor. The sweet sauce (the name escapes me!) was an essential part of the roll’s deliciousness.

The Volcano arrived next (see picture below for full “volcano” effect). Filled with huge chunks of fresh local lobster, a spicy sauce and a sliver of avocado, the entire roll was baked in the oven and served warm. The lobster’s flavor really shined through, and I especially liked how the rice dried out a bit in the oven.

Our last roll contained cucumber, tuna, crab and a Poblano chili pepper sauce. I loved everything about the roll minus the cucumber exterior, which was little slippery and too summer-y for this time of year.

We concluded our sushi feast with a very un-Japanese dessert that Lee recommended. A house specialty, the plantains were covered in caramelized sugar and served hot with coconut gelato and chocolate sauce. The difference in temperature between the two chief components really made the dessert special. The plantains were sweet, but not tooth achingly so like bananas tend to be. The gelato was icy, but served its purpose well enough.

Corson’s advice really made my sushi experience at Zenbu spectacular and I recommend that all sushi-lovers try this approach at some point.

WITH the depletion of bluefin tuna in our oceans now front-page news, people around the country have been sharing with me their confusions and fears about eating sushi. I think that we — and our fish — would benefit from a new deal for American sushi: a grand pact between chefs and customers to change the way we eat.

Lobbyists for the sushi and fishing industries insist that tuna is essential to sushi, and that controls on harvesting the fish would threaten traditional Japanese culture. But that’s nonsense. Traditionally, the Japanese considered tuna unfit for sushi — especially the fatty parts. Boiled shellfish, pickled mackerel and lean, light-fleshed snappers and flounders were most popular. Not until the Western diet influenced Japan in the 20th century did the Japanese start to value the red meat of tuna and fatty cuts of fish.

But the Japanese still value tradition. When I lived in Tokyo, eating sushi generally involved a trip to a tiny neighborhood sushi bar. The chef, like a good bartender, knew everyone by name and bantered with his customers while he worked. Instead of tables and menus, people sat at the bar and asked what was seasonal and most flavorful. The chef delivered a delightful variety — unpretentious little fish with great character, crunchy clams, surprisingly tender octopus.

When sushi took root in the United States in the 1970s, a few Japanese chefs tried to educate Americans about the variety of seafood eaten in traditional sushi, and a few made the effort to recreate the neighborhood sushi bar, with its cheerful chatter, trusting relationships, lack of menus and reasonable prices.

But the dirty little secret of American sushi is that from the beginning, many Japanese chefs assumed that we could never appreciate the wide-ranging experience the way their Japanese customers did, so they didn’t bother to educate us. Simple sushi took over, featuring the usual suspects: tuna, salmon, boiled shrimp.

Today, most Americans remain wary of the stern-faced sushi chef, and dare not sit at the bar — we wouldn’t know how to order or to control the bill. Many chefs, in turn, tell me that they’re fed up with the way we Americans mishandle our sushi, so they don’t bother to serve us the fun, flavorful and more peculiar toppings.

So Americans are stuck between chef-driven omakase meals at elite restaurants that cost a fortune and the cheap, predictable fare at our neighborhood places. Both extremes have deepened our dependence on tuna — at the high end, on super-fatty cuts of rare bluefin; and at the low end, on tasteless red flesh that has often been frozen for months and treated with chemicals to preserve its color.

What we need isn’t more tuna, but a renaissance in American sushi; to discover for ourselves — and perhaps to remind the Japanese — what sushi is all about. A trip to the neighborhood sushi bar should be a social exchange that celebrates, with a sense of balance and moderation, the wondrous variety of the sea.

I suggest that customers refuse to sit at a table or look at a menu. We should sit at the bar and ask the chef questions about everything — what he wants to make us and how we should eat it. We should agree to turn our backs on our American addictions to tuna (for starters, try mackerel), globs of fake wasabi (let the chef add the appropriate amount), gallons of soy sauce (let the chef season the sushi if it needs seasoning) and chopsticks (use your fingers so the chef can pack the sushi loosely, as he would in Japan). Diners will be amazed at how following these simple rules can make a sushi chef your friend, and take you on new adventures in taste.

In return, the chefs, be they Japanese or not, must honor the sushi tradition and make the effort to educate us — no more stoicism. They must also be willing to have a candid conversation about the budget before the meal; it’s the only way American diners will be willing to surrender to the chef’s suggestions. Sushi should never be cheap, but it also should never be exorbitant, because that makes it impossible to create a clientele of regulars.

Fraternizing with the chef may be a tough habit for Americans to take up. But we’ve had sushi here now for four decades, and it’s time for a change — both for our sake, and for the sake of the embattled tuna. Let the conversation across the sushi bar begin.

Trevor Corson is the author of “The Zen of Fish: The Story of Sushi, From Samurai to Supermarket.”