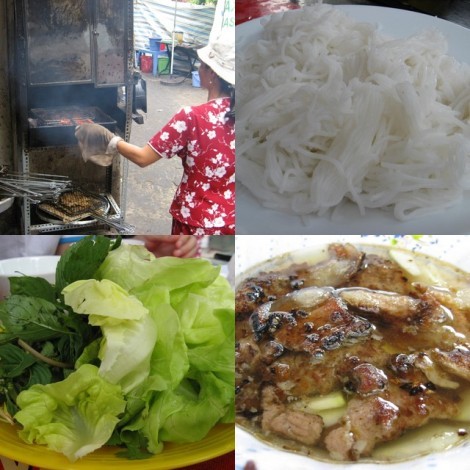 Firstly, hats off to Wandering Chopsticks for pointing me to this awesome bun cha joint on Ly Tu Trong Street. I hardly ever eat in District 1 unless its fancy or sushi and would have never found this place otherwise.

A group of new (Olivia) and old friends (The Astronomer, Zach and Tom) headed here for lunch right before the Lunar New Year shutdown, which is unfortunately still going on. The Vietnamese sure do know how to relax after a year of hard work! I hope my xoi vendors start dishing out the goods soon.

During our visit, the eatery was sold out of the cha gio cua be (crab eggrolls) WC raved about, but the manager promised me a complimentary one the next time I stopped in.

Our group ordered five portions of bun cha at 25,000 VND each. Generally, I find that bun cha portions veer toward meager, especially in the bun (vermicelli rice noodles) department. The Astronomer usually has to request two extra plates of bun to round out his meal. This restaurant served up the perfect amount of food.

The flame-grilled pork patties with bacon bits (not Bacos) were dunked in a mild fish sauce vinaigrette with thin slices of pickled daikon. The smoky patties were packed loosely, contained a satisfying ratio of meat to fat and took on the sauce’s sour flavors well. Truly, excellent. I can’t wait to compare and contrast bun cha Saigon with bun cha Hanoi when I visit later this year.

Since I’m in the south, I assembled my bun cha in a southern fashion—small bowl + herbs + greens + meat + sauce. Definitely the best I’ve had so far.