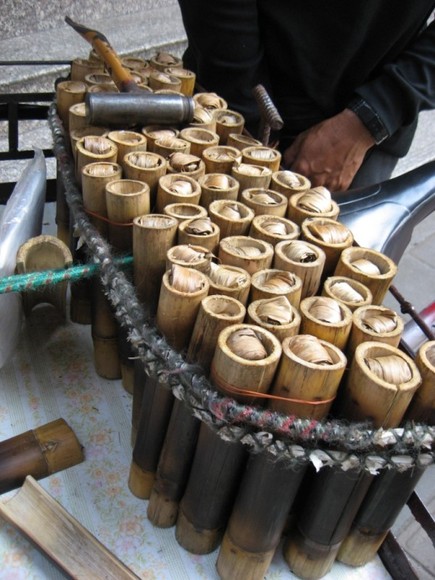 We only had a few hours in Bangkok before flying back to Saigon on our final day. The Astronomer and I skipped out on our usual morning run to maximize the short time we had left in the city. We enjoyed the hostel’s complimentary breakfast of bread and fruit before heading out to Sukhumvit and Central World for the last time.

A couple paces from our hostel, I saw a man selling sticky rice from the back of his bike. 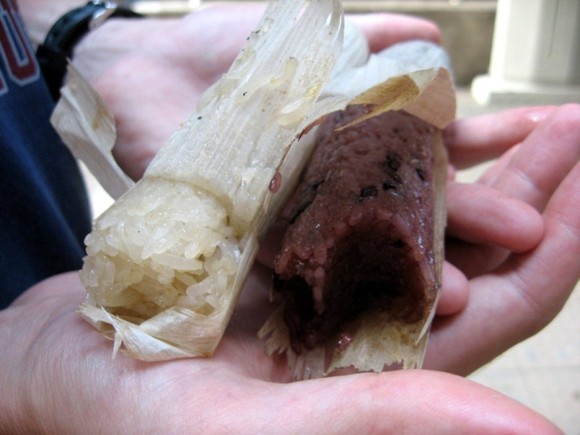 The grilled bamboo sticky rice came in two varieties—black bean and plain. I purchased one of each for 10 baht and ate them while we walked. Unlike the ones I ate in Siem Reap where the bamboo served as a container and utensil, the vendor removed the exterior from these. The sticky rice with black beans was the softest and most tender sticky rice I have ever eaten. 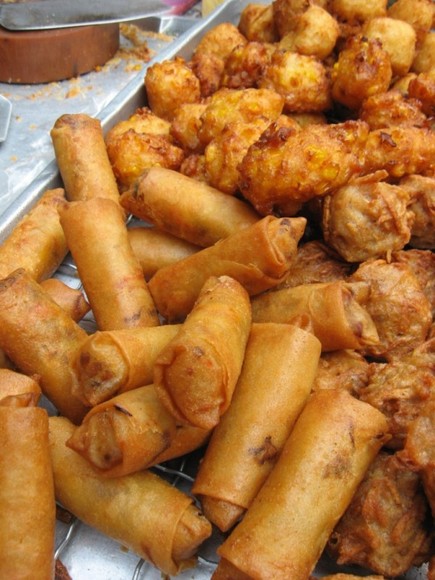 The Astronomer couldn’t pass up the opportunity to indulge in some deep-fried corn fritters and egg rolls and bought one of each (10 baht). He said that the egg roll paled in comparison to cha gio, but the corn fritter was a fine treat. 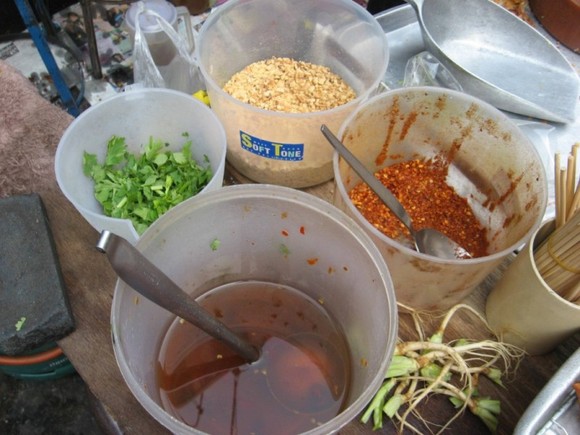 These sauces and fixins came with the egg roll and corn fritter. 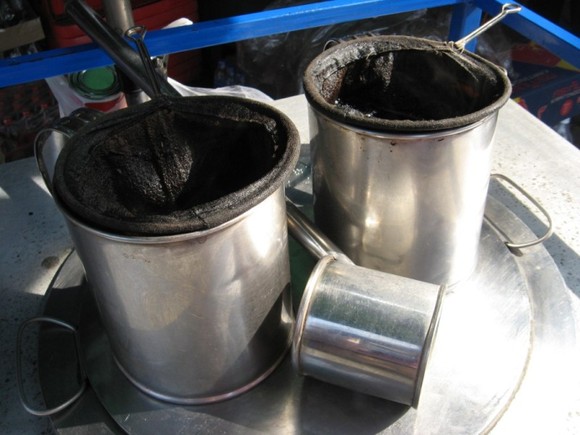 I couldn’t leave Bangkok without one last Thai iced tea (12 baht). Even in a touristy part of town, I encountered difficulties with not knowing the language. The vendor had a hard time understanding what I wanted, but with some persistence and creativity, I received the desired product. The tea was creamy, sweet and washed down the sticky rice nicely. 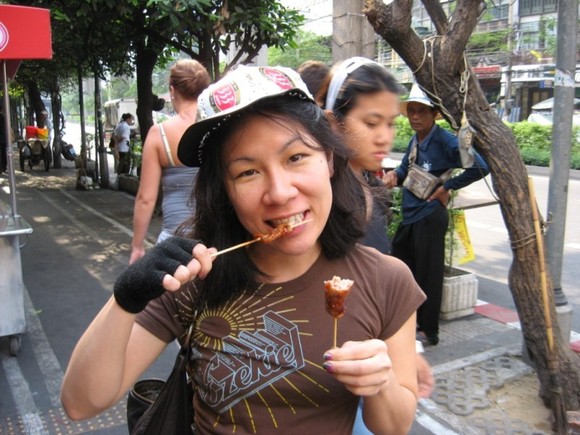 Liana couldn’t leave Bangkok without two more meats on a stick. And yes, that is a hat made from old 333 beer cans she’s sporting. 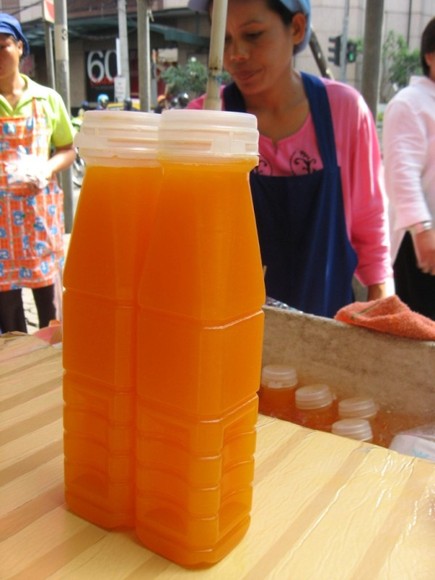 Perhaps the most ubiquitous street food sold in Bangkok is freshly squeezed orange juice. It seemed like every other vendor was hawking OJ during our stay. The Astronomer decided that we had to taste Bangkok orange juice (20 baht) at least once before leaving the city. Accustomed to Bangkok’s tooth achingly sweet beverages, I found the juice rather sour, but it’s probably because my taste buds were warped at this point. 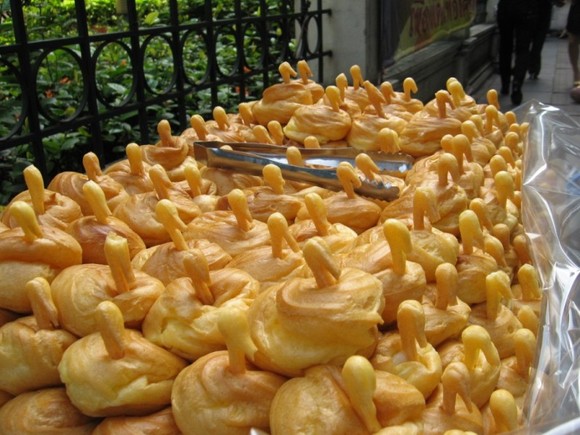 Nearing the original Central, The Astronomer and Lush each procured a swan-shaped cream puff (3 baht). These ridiculously adorable puffs tasted just like banh kem su back in Saigon, which the French introduced during colonization. I wonder who introduced the cream puff to Thailand… 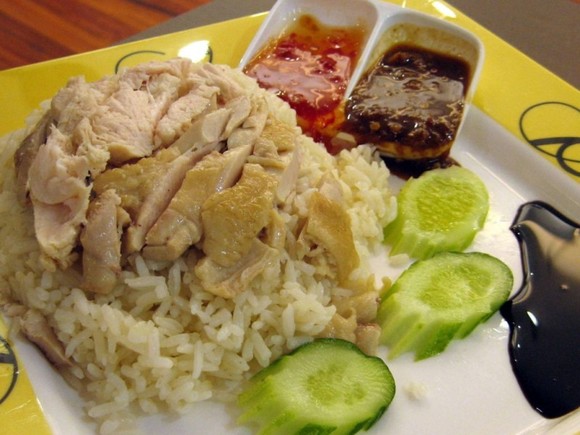 By the time we reached the food court at Central World, The Astronomer and I had reached our early morning food limit. Lush, on the other hand, was game for some Hainese chicken rice (40 baht). She said that the chicken rice was better than the one we ate at The Red Dot earlier that week. I was impressed by the variety of sauces available. 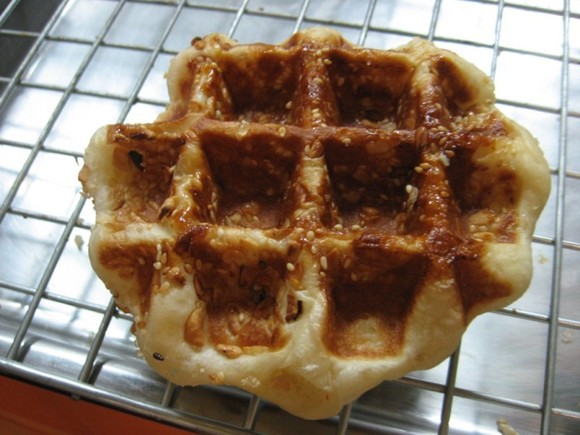 From Central World, we boarded the sky train to our hostel to grab our luggage and to catch our flight. In the sky train station, we purchased a sesame salt waffle (18 baht) and an almond waffle (18 baht). We fell in love with these crisp, yet flaky treats during our stay in Bangkok and it was a wonderful final bite.