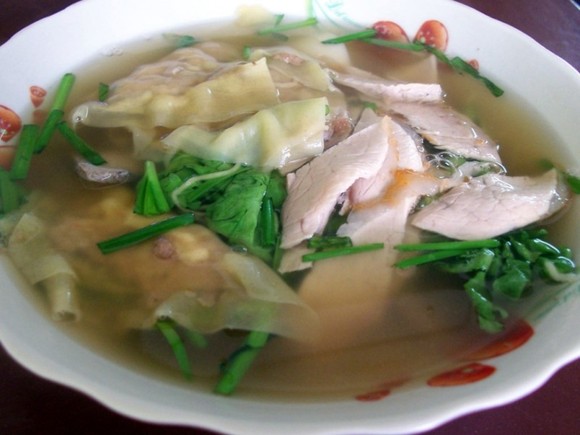 When visiting Hanoi, my primary culinary objective is to sample my favorite northern Vietnamese dishes in the land of their creation or, better yet, try something I’ve never seen or even heard of in the south. The first meal of my latest visit was a late lunch. I was absolutely starving after an hour plus run and no food since 8 a.m., so when my intended destination turned out to be a tourist trap, I blindly stumbled into a wanton soup eatery. The place was basically empty, but it was definitely not peak hours, and I justified my choice to myself in light of the above rule by noting that wantons and dumplings are a Chinese import, and Hanoi is a lot closer to China than Saigon.

I was also intrigued by the northern spelling of wonton: van than instead of hoan thanh. Nevertheless, I ended up ordering sui cao my. I found it rather disappointing—the sui cao themselves were good, with nice peppery seasoning, but I was only given three. Bland slices of pork made up the majority of the meat in the dish, and the broth was nothing special. Sadly, it seems my judgment was clouded by hunger when I chose this place. 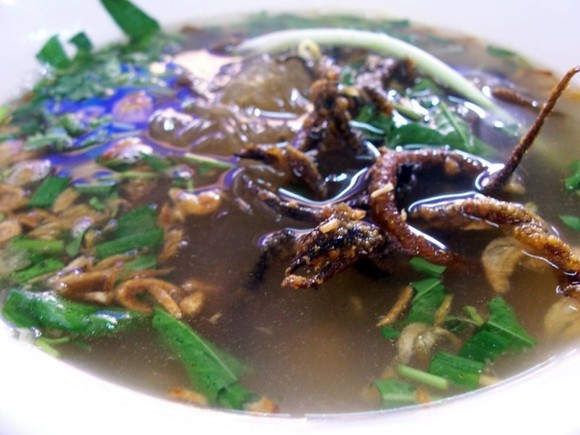 Fortunately, I was more than ready to seek redemption in the form of a second course. I headed for a mien luon spot recommended by my Rough Guide tour book (as noted previously, their Hanoi street eats section is surprisingly insightful). I ordered the mien nuoc—thin glass noodles and crispy mini eels in a broth with fried shallots, bean sprouts, and scallions. Now this was the sort of eating experience I was looking for—I’m not sure whether this dish is even of northern origin, but it was certainly different than anything I had eaten before, and pretty darn delicious. The broth reminded me of a good hu tieu mi—sweet and salty and crying out to be drank when the noodles were gone. The dried eels were interesting—kind of like the fish-skin chips The Gastronomer and I sampled once at the Chinatown business expo. I had expected little pieces of big eel in the soup, but these were entire animals I was gulping down—the eel equivalent of the dried mini-shrimps used in xoi man. 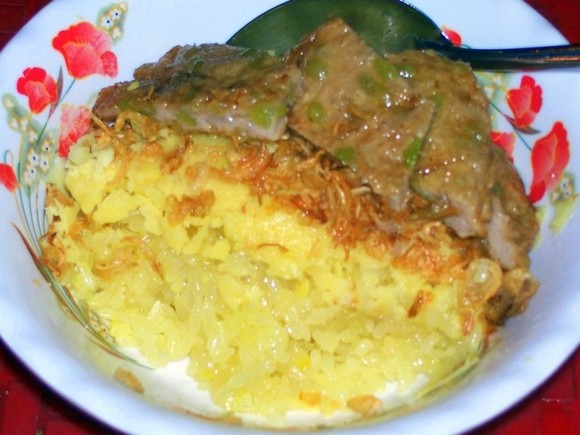 Dinner found me wandering again, but this time at a more thoughtful pace. I found a winner in Nguyen Huu Huan Street. First I stopped at a massive sticky rice establishment. The Gastronomer has tried quite a few varieties of xoi on Ton That Thuyet Street, but this was a whole different story—it seems the northerners take their xoi pretty seriously. Slightly overwhelmed, I glanced around at what people were eating before pointing at some sort of loaf and saying, “sin cho toi mot to xoi cha.” As it turned out, xoi cha (or at least this variety—there were definitely several kinds available) consisted of yellow sticky rice topped with shreds of hardened mung bean paste, fried shallots, and the cha itself. I made little progress discerning what the loaf was made of, but it was a bit chewy and surprisingly sweet. I don’t usually love sweet xoi, but the ingredients of this one melded perfectly. I almost ordered another bowl, but another stall down the street was calling my name (“Astronomer, Astronomer…!”). 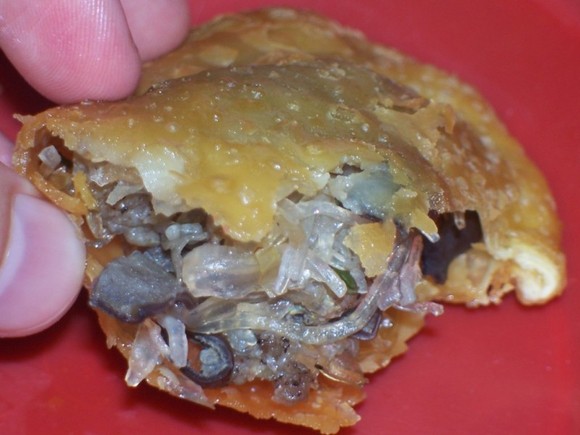 This one was run by a father and his three sons and served a mostly male clientele. On display were a number of pastries deep fried to order; I decided it was time to sample another banh goi. The pastry itself was similar to the first banh goi I tried, but the components were more evenly distributed inside, and the spicy dipping sauce, which looked remarkably similar to the broth for bun cha but tasted entirely different, was a welcome addition. 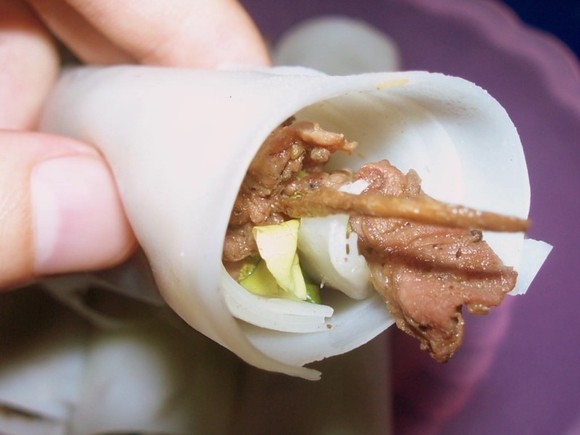 I also ordered a plate of pho cuon. When they came out, I wasn’t sure if I was supposed to dip them in the same sauce, but I decided to go for it. No one stopped me, and they went together wonderfully. When The Gastronomer and I tried pho cuon down south we were underwhelmed, but these were really spectacular. Filled with plenty of ground beef and copious mint leaves, they were quite tasty without the sauce and even better with it. I’ll definitely have to return for more.

I capped off my dinner with a couple of pastries from one of the small French-influenced bakeries that are everywhere in Hanoi. The chocolate tart turned out to contain coffee, which was a disappointment, but the lemon tart (R) was awesome. 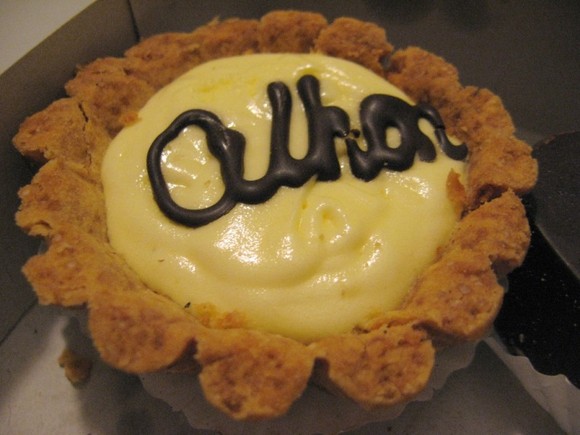 Day two began with an ultra-simple breakfast of bread and jam at the Prince II hotel. The baguette was one of the best I’ve had in Vietnam, with a soft crust and substantial exterior. Afterwards, I was still a bit hungry, so I bought a chocolate-filled pastry from a street vendor. I bargained the price down from 10,000 VND to 5,000 and then made the purchase despite knowing that I should have paid no more than 3,000. She aggressively tried to sell me additional pastries and even a trip to Ha Long Bay, but I declined. When I got back to my room and took a bite of the pastry, I found that there was in fact nothing inside. I hate being a tourist.

Despite my previous resolution to try something new every meal, when lunchtime rolled around I was really in the mood for some bun cha. I checked out Dac Kim on Hang Manh Street, recommended by Wandering Chopsticks and advertised as Hanoi’s most famous bun cha restaurant in the Rough Guide, but it was closed. Perhaps 1:15 in the afternoon was too late? Luckily, I was only a few blocks away from Dac Kim II, and I couldn’t resist going back (side note: I’m not sure if one of these restaurants copied the other, or if they actually have the same owners. I walked by a third Bun Cha Dac Kim in the Old Quarter the day before. Oh well, if they’re all good, what does it matter?). The nem cua be were even better than I remembered them, and the bun cha was also satisfying, although I felt like I received an inferior ratio of juicy sausages to chewy meat strips this time.

All in all, another successful business trip to Hanoi. Next time I look forward to trying pho xao, northern banh cuon, and maybe some barbecued bird.

7 thoughts on “Eating in Hanoi II”