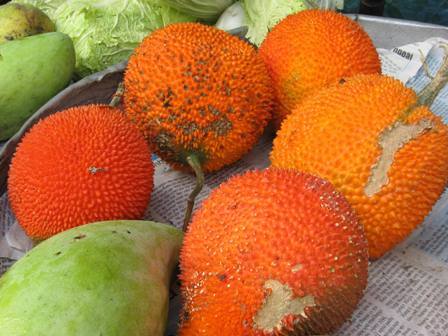 Momordica cochinchinensis (Lour.) Spreng., commonly known as gac (IPA: /ˈgæk/, from Vietnamese: gấc, or quả gấc [quả meaning “fruit”]; in Chinese: 木鳖果), is a Southeast Asian fruit found throughout the region from Southern China to Northeastern Australia. It is also known as Baby Jackfruit, Spiny Bitter Gourd, Sweet Gourd, or Cochinchin Gourd. It has been traditionally used as both food and medicine in the regions in which it grows.

Because it has a relatively short harvest season (which peaks in December and January), making it less abundant than other foods, gac is typically served at ceremonial or festive occasions in Vietnam, such as Tết (the Vietnamese new year) and weddings. It is most commonly prepared as a dish called xôi gấc, in which the aril and seeds of the fruit are cooked in glutinous rice, imparting both their color and flavor.

Other than the use of its fruit and leaves for special Vietnamese culinary dishes, gac is also used for its medicinal and nutritional properties. In Vietnam, the seed membranes are used to aid in the relief of dry eyes, as well as to promote healthy vision. Similarly, in Traditional Chinese medicine the seeds of gac, known as mubiezi (Chinese: 木鳖子), are employed for a variety of internal and external purposes.

While I can’t vouch for the medicinal prowess of gac fruit, I can attest for its brilliant dying properties, especially in the form of Xôi Gấc. I’m a little afraid of staining my fingers and clothes, but  one of these days I must purchase a gac fruit to taste in its purist form.

With the exception of xoi, I have very little experience with guc fruit. Dear readers, how do YOU (or your mama and grandma) eat and use guc fruit? I am very curious…