Ever since The Astronomer and I decided to visit Hong Kong, I have been dying to eat at Bo Innovation. I first encountered the culinary genius of Alvin Liung, the Demon Chef, in a New York Times article entitled “In Hong Kong, Home Kitchens With Open Doors.” The article explored the delicious underground world of speakeasies that sounded irresistible.

”Bo InnoWhatti? You may well ask,” writes the engaging owner, Boris Yu, in explaining the concept of one of the most sophisticated speakeasies. The cuisine of Bo InnoSeki, located in the Central district of Hong Kong Island, is inspired by kaiseki, a traditional Japanese multicourse meal of small tastes prepared with seasonal ingredients. Mr. Yu prefers to call the food ”creative Hong Kong cuisine,” because it includes influences from France, Spain and China. Rather than using conventional place mats, the 12 to 15 courses are served in small plates and shot glasses set on a stainless steel tray or a ”stage” designed by Mr. Yu and his cook.

The chef, Alvin Leung Jr., who was formerly an acoustic engineer, is generally inspired for his innovative and original offerings by what he finds in the marketplace. Mr. Leung integrates simple local ingredients with foreign delicacies to create a compelling series of small tastes.

My second encounter with Bo Innovation was on Anthony Bourdain’s No Reservations. When Bourdain visited, he was served meat and rice ice cream, Szechuan lobster in dumpling skin, gummies made from flowers, egg tarts and passion fruit.

Needless to say, I arrived at Bo with high expectations.

The restaurant recently moved from their location on Ice House to Wanchai and has yet to change the address on their website. In fact, The Astronomer had to do some sleuthing to find the new location. When we arrived for our 1 PM reservation, heavy-duty construction was taking place out front and there were zero customers in sight. Not the most auspicious signs, but we proceeded forward anyway.

Being the only patrons, The Astronomer and I had our pick of tables. We chose the one toward the back by a window. Since ordering a la carte wasn’t an option, we had the set lunch menu that included two dim sum items, a main entrée, rice or noodles and dessert ($148 HKD). 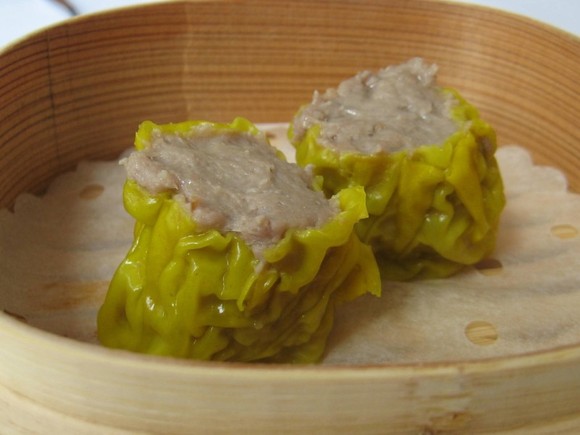 Our first dim sum item, steamed lamb sui mai with XO sauce, looked sort of gray and tasted not the least bit like lamb. The XO sauce was forgettable and didn’t help the struggling sui mai one bit. This disappointing start made my heart sink a little. 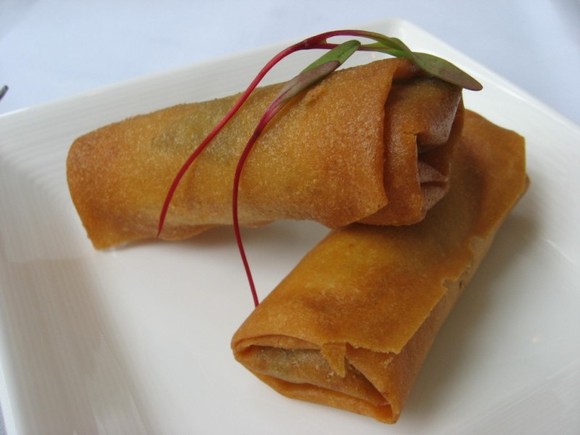 The duo of spring rolls filled with chicken, pesto and bamboo shoots arrived piping hot. The combination of pesto and bamboo is definitely unique, but overall, the flavors were pretty ordinary. The Astronomer loved this course much more than I did because its been much too long since he’s had his fill of muddled basil. 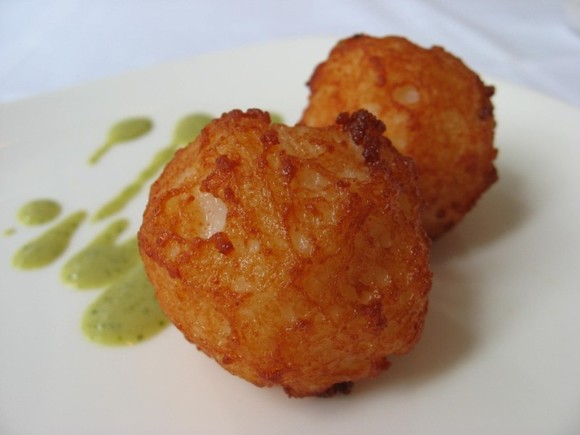 My favorite dim sum item were the deep fried scallops with kaffir lime and lemongrass sauce. Although the fried balls had a striking resemblance to tater tots, they were made purely of scallops. The innards were moist and contrasted nicely with the golden coating. The sauce tasted like Thailand. 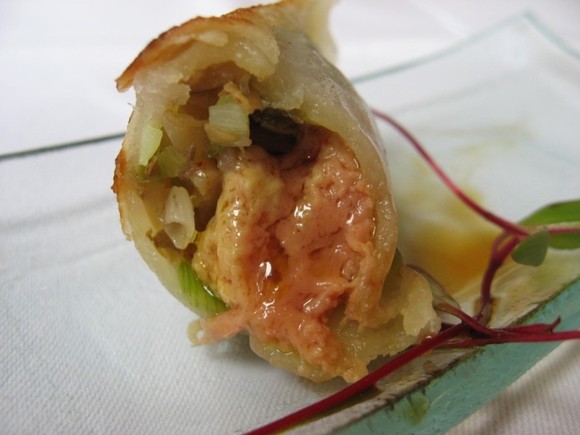 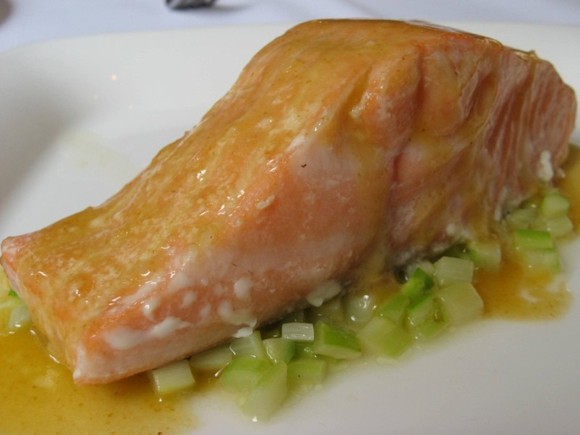 For our mains, we chose the fish of the day (salmon) and crispy ginger duck.

The fillet of salmon with kumquat sauce was well-prepared, but so boring that I nearly fell asleep. Salmon paired with citrus fruit is so over-played. Bo, where’s the innovation? According to the waiter, the fish sat on a bed of “white asparagus,” which was completely false. The vegetable tasted like a cross between celery and cucumber and nothing like asparagus. However, compared to our second main, the fish was impeccable. 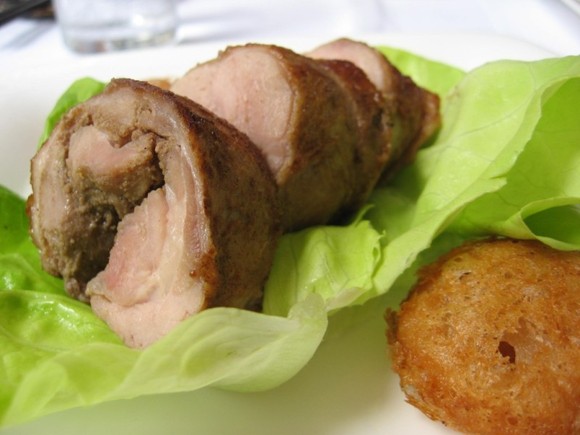 The crispy ginger duck with taro fritter and kumquat green salad, was truly horrific. I’ve had airplane food more palatable than this. The duck was under seasoned, dry as a bone and seriously tasteless. The taro fritter proved that not all deep-fried foods are intrinsically good. And as far as I was concerned, the kumquat salad did not exist. The only green on the plate was an undressed leaf of butter lettuce.

I must have been sending the kitchen some heavy ‘this sucks’ vibes because our waiter came over to ask how everything was. My response was ‘Where’s the kumquat salad?’ At this point, an onslaught of truffle-intensive freebies started arriving. 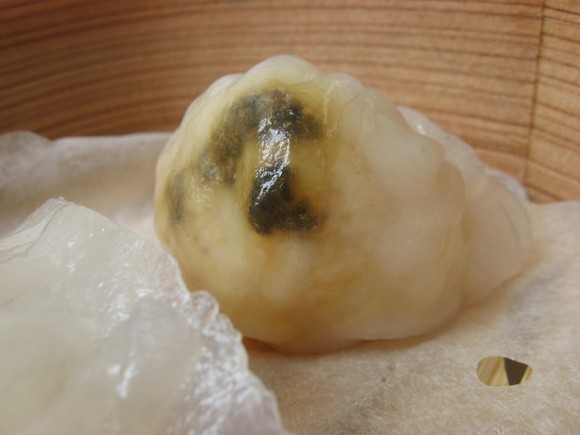 The shrimp and truffle dumpling arrived first. A valiant effort, but not very exciting. It tasted like an average shrimp dumpling with a hint of black truffle. Yawn. 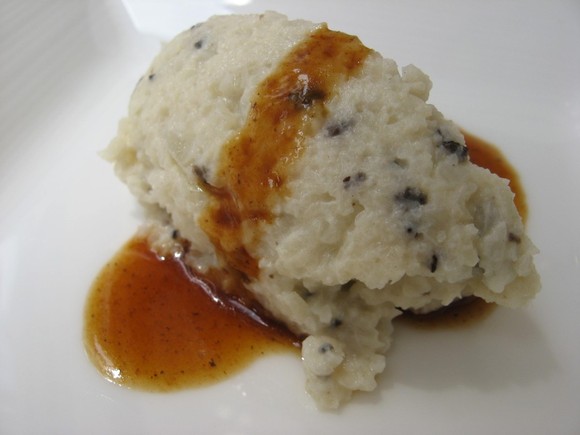 The truffle and cauliflower “risotto” with chicken jus came next. Our waiter said that this was one of the restaurant’s specialties. The texture of the cauliflower was an interesting replacement for traditional arborio rice and the jus was flavorful. Innovative, yes, but not the most appealing combination of flavors. 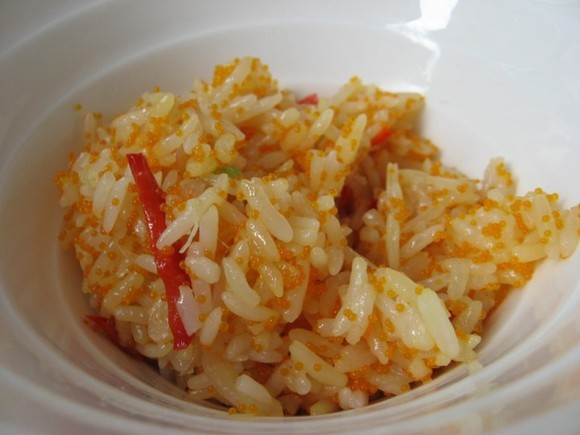 The carbohydrate portion of our meal was definitely a highlight. The fried rice was dusted with tobiko, scallions and chilies. Not only was it aesthetically appealing, but it was delicious as well. 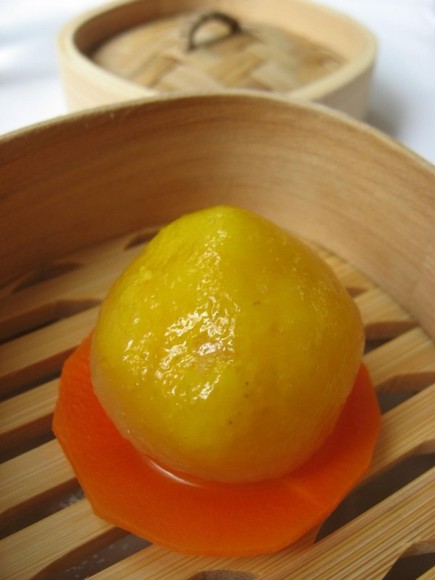 Our first dessert, crystal apple dumpling, was similar to the cauliflower risotto—innovative, but not exactly tasty. The gelatinous orb was mild and cinnamon-y, and the insides were not apple-licious enough. 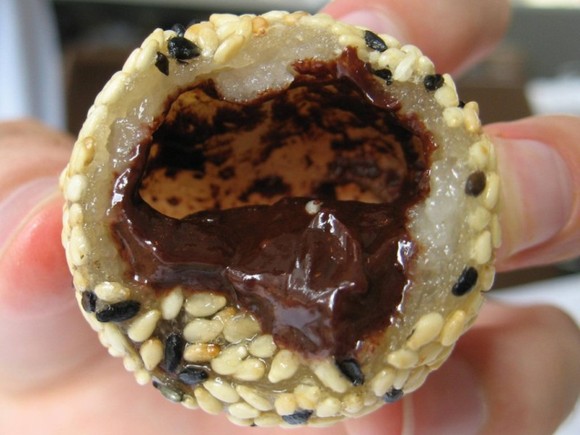 Thank goodness the bitter chocolate filled sesame balls arrived because I would have left an unhappy camper. Unlike the bland orbs that proceeded them, these were rich and fabulous.

I should have probably waited until all the kinks of relocating had worked out before visiting Bo, but who knows when I’ll be back in Hong Kong.