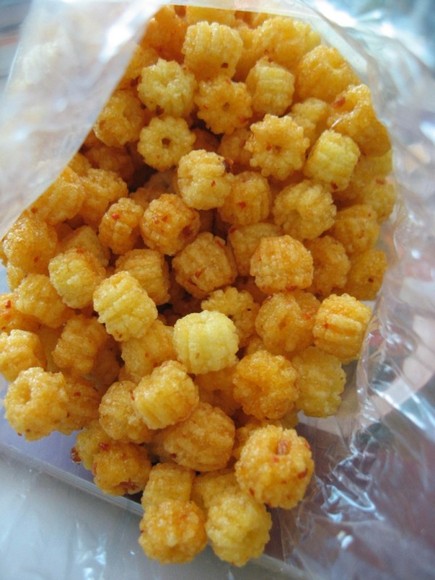 Although I refer to these golden nuggets as savory Cap’n Crunch, their official name is nui chien satay hanh. Nina (or shall I say Miss Adventure) introduced them to me a couple weeks back. Nina is the queen of snack food items. In fact, she mentions her penchant for salty and crunchy bites at least once every time we hang out. She’s a funny one.

In addition to being salty and crunchy, nui chien is also a bit spicy due to generous amounts of chili flakes. Its primary flavoring agent is monosodium glumate, which is not a problem in my book. My friend once told me that MSG stood for “Mmm, so good.” I totally agree. The combination of crunch, savory and spicy makes nui chien dangerously addictive. Let’s just say I’ve eaten 100 grams of the stuff in one sitting. And then I went running. Ouch! 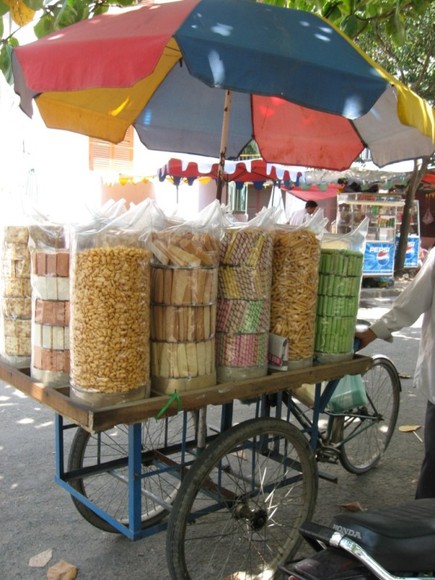 My first few packages of nui chien were gifts from Nina. Both times she told me to share the bounty with The Astronomer and both times I ate the packages solo. I’m such a bad girlfriend.

I also buy nui chien from the cookie/cracker vendors who roam the streets of Saigon and at the mega-grocery chain Maximark. Although the price of nui chien is cheaper at grocery stores, I try to buy it from the little guy as often as possible because street food must be kept alive. 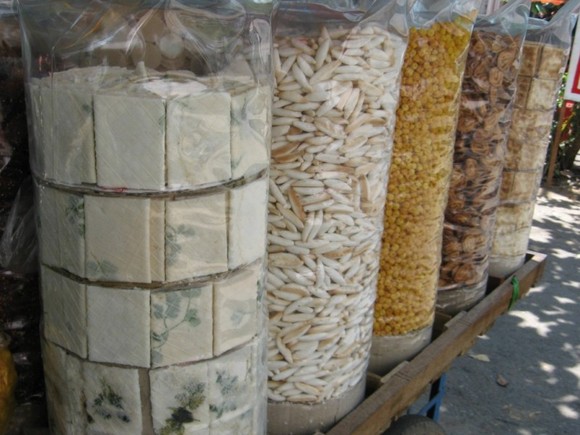 I ran into a cookie/cracker vendor today during lunch and was surprised that there was no nui chien to be had. I asked the man why he wasn’t selling the stuff and his response was that nui chien is not very popular so he stopped carrying it. Sadness. With no nui chien to purchase, I settled for 100 grams of bootleg Ritz crackers. They’ll be gone in no time.