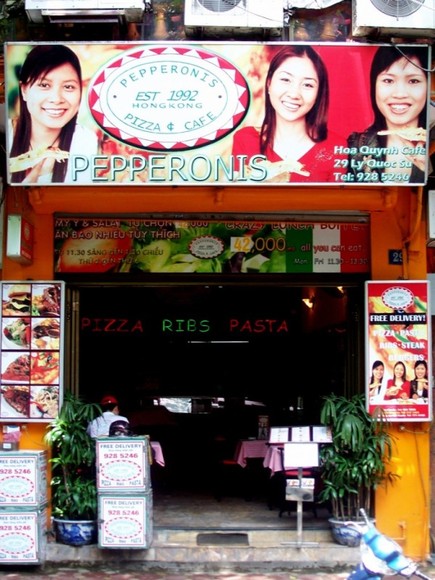 I’ve been wanting to try Pepperonis restaurant in Saigon for a while. This Hong Kong-based “Italian” chain sells a wide range of pizza and pasta, but they’re known in particular for their cheap lunch and dinner buffets. As recently as two years ago, you could gain access to an endless supply of pastas and salads for a mere 28,000 VND. While this price has since increased (along with the cost of everything else in Vietnam), the 42,000 VND lunch buffet is still quite a deal. 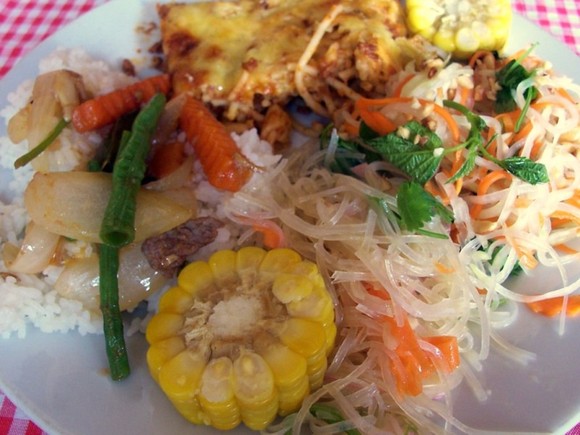 On a recent visit to Hanoi, I happened to walk past a Pepperonis branch on the way to my hotel from the airport shuttle stop. Although I typically resolve to eat nothing but novel northern Vietnamese delicacies when I visit the capital, on this day I was in the mood for something different. I had followed up a longish run in the morning with a meager breakfast, and after skipping out on the disgusting sandwich on my Vietnam Airlines flight, I was unusually hungry. In these situations, there’s something about stuffing yourself with Italian pasta that just hits the spot—Vietnamese food can’t quite match it. Besides, I couldn’t see myself dragging The Gastronomer to an all-you-can-eat luncheon of questionable quality during our final two weeks in Saigon. It seemed appropriate to go at it alone.

It was 12:55 PM when I stepped inside. The advertised lunch buffet hours were 11:30-1:30, so there was no time to dawdle. I chose a seat upstairs by the window (might as well give my camera a fighting chance), grabbed a plate, and headed back downstairs to the buffet. It wasn’t the most impressive spread I’ve seen… just one table of entrees in metal cafeteria-style tins, and one table of salads with slightly more appealing presentation. The selection was also a bit strange—I had been hoping for a choice of several pasta shapes and a nice range of sauces, but I was instead presented with a mismatched hodgepodge of Vietnamese and Western food. 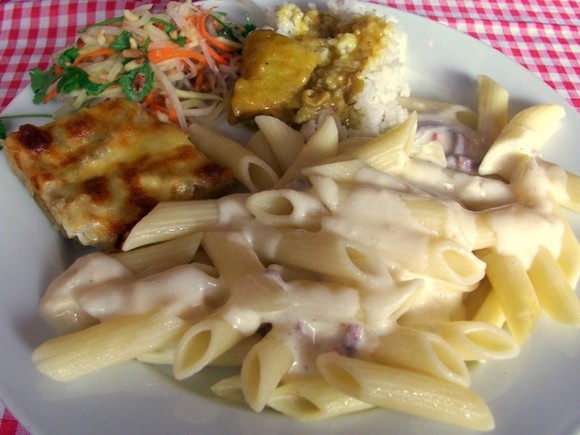 I threw caution to the wind and started filling my plate with a little bit of everything. The end result didn’t look so hot, but I was ready to eat. I started with some glass noodles from the salad table. These definitely came from the Vietnamese end of the spectrum. Dressed with a sweet, nuoc mam-based sauce, they were tasty, if not exactly what I had come for. I grabbed some corn on the cob, which was terrible—cold and slathered with way too much butter. I struggled to finish two small sections.

Things began looking up with a carrot and daikon salad. A classic Vietnamese goi with peanuts and herbs, it looked like do chua but wasn’t sour. I also sampled an excellent baked pasta—a bit like lasagna but with made with spaghetti and lacking runny cheese. This one confused me at first, but I eventually identified it as the baked Bolognese from the menu. It was really satisfying—different than anything I had eaten in months. 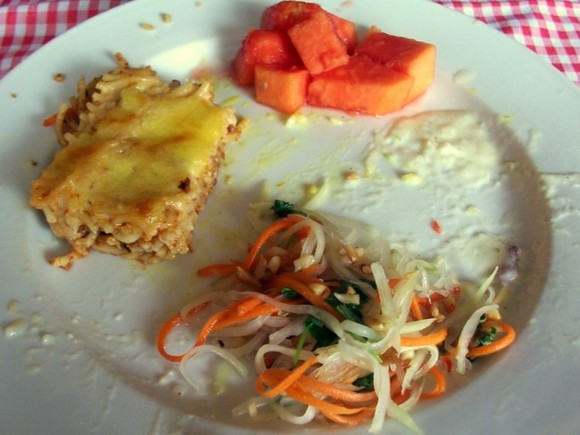 I rounded off plate #1 with some stir-fried vegetables on rice. They were solid, with lots of onions (not too raw) and a hint of lemongrass, but it was a super-weird thing to eat after the baked Bolognese. The words, “What am I doing?” came to mind.

Nevertheless, I was still hungry, and it was nearly 1:15. I went back for plate #2. I came back with more goi (ironically probably my favorite dish of them all), some penne with white sauce, a section of veggie lasagna, and chicken curry with rice. The penne was a huge disappointment. Since it was the closest thing to my original vision for the meal available, I filled up a full half-plate with it, but the sauce was bland and tasted too much like pure cream with a hint of mushrooms. The veggie lasagna turned out to actually be potatoes au gratin, or perhaps some other creamy dish with potatoes, onions, and herbs. It was decent, but it didn’t leave me yearning for more.

The chicken curry was probably pretty good, but this time the shock of the transition from creamy pastas to Vietnamese food was too much. I was getting full, and I just wasn’t in the mood anymore. This had to be one of the strangest meals I’d ever eaten. 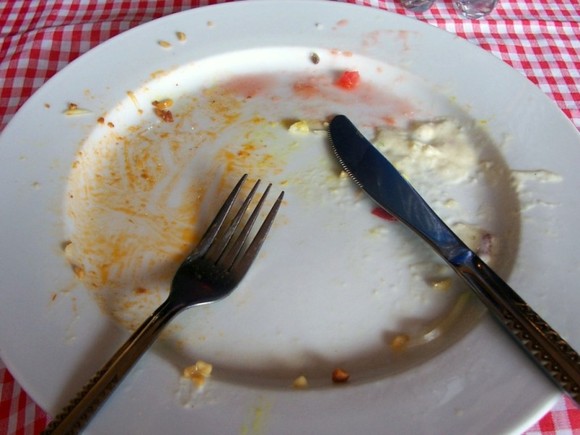 It was almost 1:30, so I went back for one more helping of my favorites—the carrot and daikon salad and the baked Bolognese. I finished off the meal with some papaya chunks from the dwindling fruit salad. I had eaten too fast, but I felt alright. I had found a few winners among the selection of mediocre offerings, and I had satisfied my curiosity about Pepperonis. It’s not so different from one of the cheap pizza/hoagie/pasta joints in Pennsylvania (albeit with a bizarre Vietnamese twist), or perhaps the Swarthmore dining hall on a good day. Clearly somebody likes it—according to their business card, there are 5(!) locations in Hanoi. Guess it wasn’t such a coincidence that I ran into one.