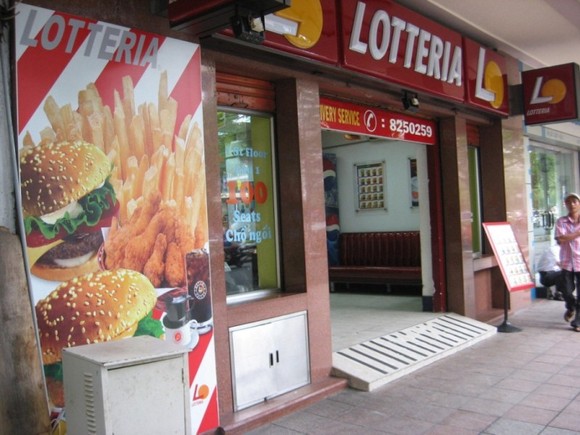 If you’re one of the 1,400+ people who have read my Jollibee post, you’ll remember that I promised to blog about Lotteria before leaving Vietnam. This hasn’t turned out to be as easy as I anticipated—to put it simply, at no point in the past 12 months have I felt any desire to step inside a Lotteria branch and order food. However, one day I was on a blogging roll, and with our days in the country winding down, it was time to act. 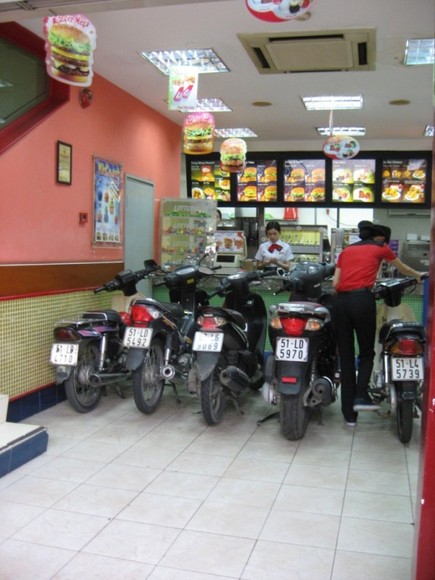 A little background on the place: the Korean-owned Lotteria is the dominant fast-food hamburger chain in Vietnam. As with most American-inspired products, the hamburger has caught on among the Vietnamese community, and business is good for Lotteria. However, most expats agree that the burgers suck. Rumors abound, like “they’re not even trying to make good hamburgers, they’re just holding retail space until they get bought out by McDonalds.” Nevertheless, our friends Zach and Tom used to eat here approximately once a week. They too weren’t big fans of the hamburgers, but they swore by the chicken sandwich. Once I accompanied Zach and tasted a few of his fries. They were good—good enough that I wanted to eat more. Not quite McDonald’s quality, but a huge step above Jollibee. Still, I had no interest in sampling Zach’s sandwich.

On my solo visit, I spent a few minutes perusing the menu. Like any good Asian hamburger chain, Lotteria offers a selection of rice dishes in addition to sandwiches and fried chicken. I considered ordering the chicken sandwich or “bulgogi burger” but decided that it would be wrong to try anything other than the classic cheeseburger (burger pho mai) for my first Lotteria meal. Two categories of combo meal were available: a sandwich with fries and a soft drink (been there, done that), or a sandwich and drink paired with a piece of fried chicken. I ordered the latter, minus the Pepsi. 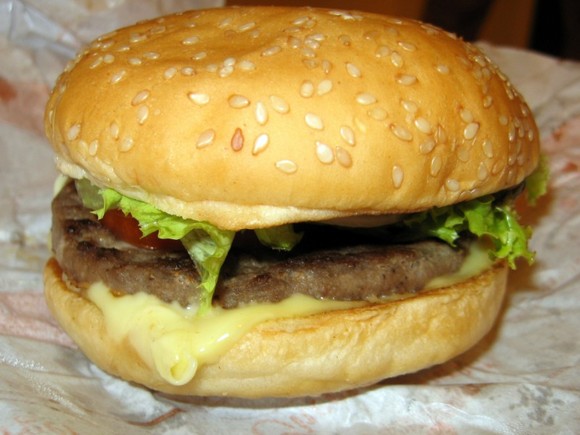 Zach used to hype how the food was prepared to order at Lotteria—the meat covered with breadcrumbs right before your eyes. Well, that may be true of the chicken sandwich, but for the hamburger and fried chicken it most certainly is not. My food was bagged up and I was out the door within 15 seconds of placing my order. I fastened the bag on my motorbike hook and headed home, because isn’t that what you’re supposed to do with fast food? Actually, it would have been more appropriate to eat the burger with one hand while driving, but it hadn’t been photographed yet. Plus I didn’t want to die.

So, what was the verdict? Well, the cheeseburger didn’t blow me away, but it wasn’t inedible either. I removed the tomatoes and pickles, as I would in America, leaving the burger dressed with lettuce, cheese, a few shards of onion, and a touch of mustard and ketchup. The quality of the ingredients seemed comparable to a typical McDonald’s burger, but the folks at Mickey D’s really know what they’re doing with flavoring. The Lotteria burger was bland. The cheese didn’t taste like cheese (or anything really), but that’s often the case with cheeseburgers.

I was pleased to see two small packets in my to-go bag, one labeled “chili sauce” and the other “tomato sauce.” I assumed the “tomato sauce” was ketchup; it looked reasonably like what I’m used to from Heinz, if a little darker in color. Jollibee only offered chili sauce to complement their fries, so this was a step in the right direction. I didn’t have any fries this time, so it wasn’t as big of a deal, but I did try dipping the hamburger in the ketchup to add a little flavor. Did it taste like ketchup? Well, no…but at least they’re trying. 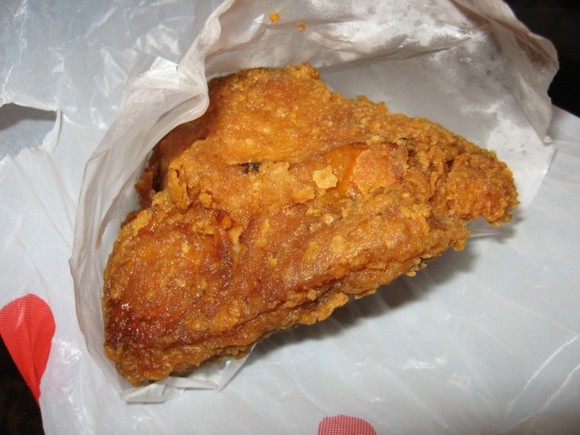 The fried chicken piece I was given was a medium-sized thigh—a nice compromise between the malnourished birds you sometimes get in Vietnam and the ‘roid-juiced pieces at KFC in the U.S. It was a solid offering, with tasty seasonings and a moist interior. The breading became a little soggy on the drive home, but that’s hard to avoid in this climate. If I had to choose, I’d go with the chicken tenders at Jollibee over this one, but you could do far worse.

From my research at Lotteria and Jollibee, I’ve come to one main conclusion: Vietnamese fast food places know how to do fried chicken. This shouldn’t come as a surprise; the concept is much less foreign to the cuisine than the idea of a hamburger. If you find yourself stuck in one of these places for a meal, ordering some variety of ga ran is probably your safest bet. Whatever you do, stay away from the spaghetti (see Jollibee), and I wouldn’t recommend the hamburgers either.