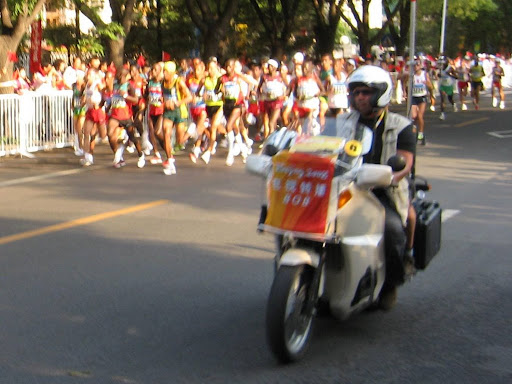 On our final morning in Beijing, The Astronomer woke up super-early to catch the men’s marathon. I was wiped out after a late evening of track and field and chose to sleep in before boarding our trans-Pacific flight. I know, I’m weak. The Astronomer caught the pack of runners at three different points along the course. Here they are around four minutes into the race. The lead pack cleared the first mile in 4:41. Insanity! 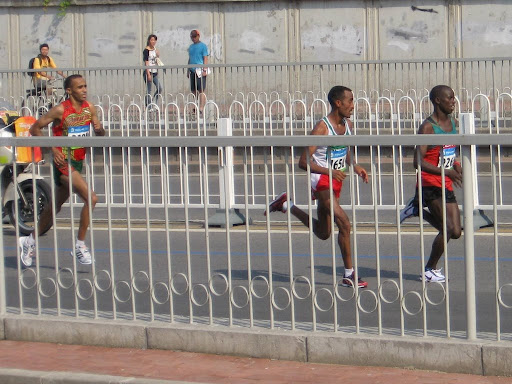 The conditions on race day were 74 degrees in the shade and 84 degrees on the course. Here are the leaders 36 kilometers into the race (six kilometers left). Sammy Wanjiru of Kenya is in first at this point, and he pulled away to win in a time of 2:06:32. What pollution?

After playing groupie, The Astronomer returned to the hotel and we got in our own (much slower) run and then headed off to the airport. 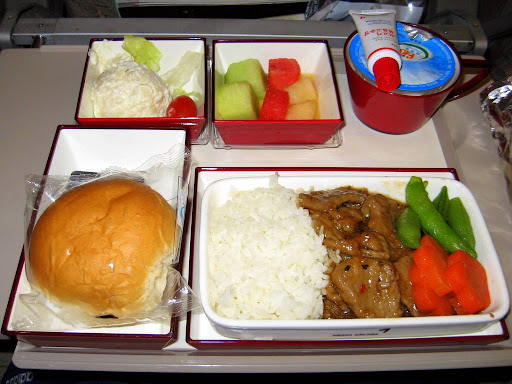 On the first leg of our flight from Beijing to Seoul, we were served beef with rice, peas and carrots. Side items included a roll, butter, potato salad, fruit salad and a tube of Korean chili paste. Although it’s hard to tell from the picture, the portion of beef seemed quite generous.  Our idea of what constitutes a proper protein portion has been forever distorted after residing in Vietnam for a year. We thought this meal was on par with the ones we’ve eaten on United and Cathay Pacific—solid airplane fare. 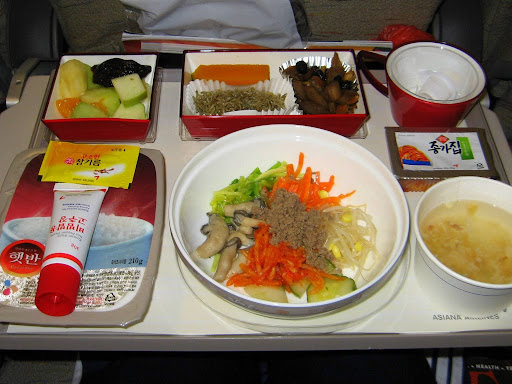 Before leaving us alone to watch movies and pass out on the second leg of our flight from Seoul to LAX, the stewardesses served dinner. Our choices were Korean or Western. The Astronomer and I had one of each—Korean for her and Western for him. I think it’s so wonderfully cool that Asiana serves bi bim bap on board. Imagine if Vietnam Airlines served pho. Wouldn’t that be a trip (literally and figuratively)? The bi bim bap came with a little fold-out note card instructing fliers in English, Chinese and Korean how to assemble and eat it. I saved the foldout because it was just too precious to throw away with the garbage.

The instructions advised me to add the hot rice to the beef and vegetable mixture first. Then, I squirted Korean chili paste on top. Lastly, I mixed it all together well. The instructions suggested that I eat the bi bim bap with the hot soup and the banchan (kimchi, burdock with peanuts and tiny salty dried fishes), which I did. The bi bim bap was probably the best thing I’ve ever eaten on board a plane. 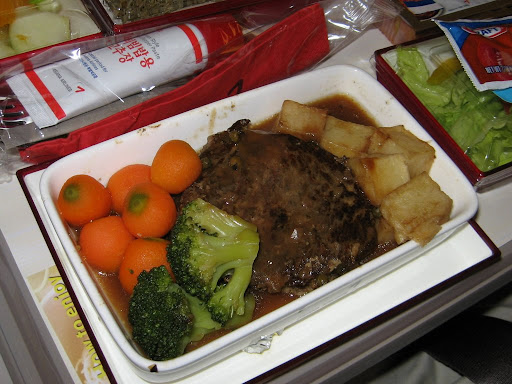 The Astronomer’s Western steak and potatoes didn’t come close to matching the awesomeness of my bi bim bap. The steak was anti-tender, but The Astronomer said the sauce was good. Suuuure. 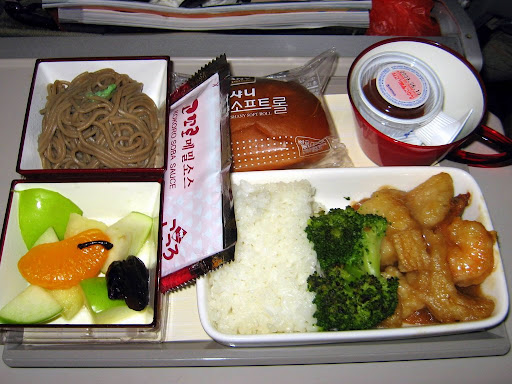 Eight hours later (two hours before landing at LAX), we were served a final meal. I chose the crispy fried seafood, which wasn’t so crispy by the time it arrived in front of me. The soba noodles with wasabi weren’t the least bit gluey, and they actually tasted quite good! What’s cool about flying on a non-American airline is that soba noodles are considered a perfectly normal thing to serve on board. Love that! 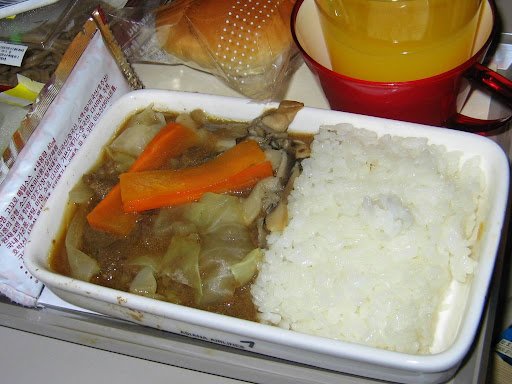 The Astronomer went for the “bulgogi” for his final meal. It tasted exactly like the beef and rice dish we were served from Beijing to Seoul. Before we knew it, we were back on American soil. Unbelievable! 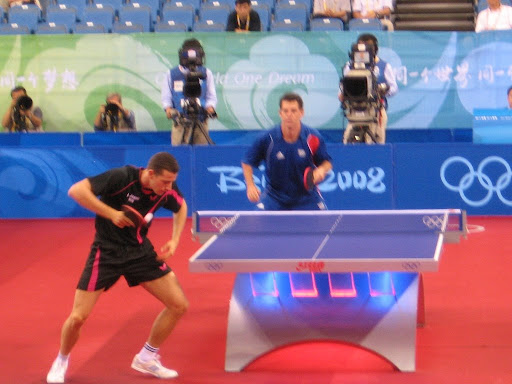 And because reader Nate inquired, here’s some ping pong action from Day 2 in Beijing. The Astronomer and I were rooting for the French dude in blue because he looked like a dad and had a little beer belly. Too bad he lost to the ultra-fit eastern European. Give the old man a break!