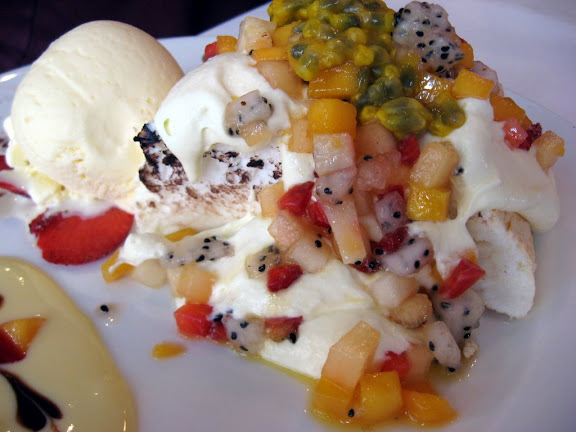 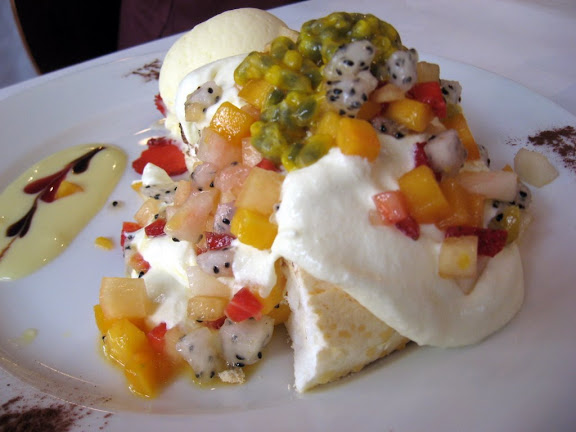 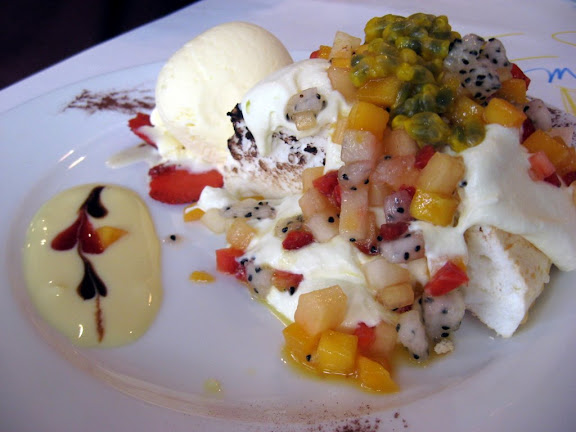 My editor in Saigon, an Aussie named Fiona, broadened my culinary horizons during our brief but wonderful publishing days together. She introduced me to eating passion fruits straight up—awesome, Vegemite—not so awesome, and pavlova—wooooot! Fiona grew up eating pavlovas and was shocked to hear that I had never heard of or sampled one of her country’s classic eats.

Pavlova is a meringue dessert named after the Russian ballet dancer, Ánna Pávlova (Russian: А́нна Па́влова). It is referred to colloquially as ‘pav’. The dessert is crispy on the outside but light and fluffy inside. The dessert is believed to have been created to honor the dancer during or after one of her tours to Australia and New Zealand. The exact location of its first creation and the nationality of its creator has been a source of argument between the two countries for many years, however more serious research into the matter indicates New Zealand as source of today’s pavlova. The dessert is a popular dish and an important part of the national cuisine of both countries, and is frequently eaten during celebratory or holiday meals such as Christmas dinner.

Curious as heck as to what the fuss over pavlovas was all about, The Astronomer, Nina and I headed to Jaspa’s, a Saigon eatery specializing in Aussie fare, to taste our very first pav. The dessert arrived decadently adorned with diced fresh fruits (passion fruit, watermelon, dragon fruit, mangoes), whipped cream, a scoop of vanilla ice cream and creme anglaise.

The texture of the room temperature pavlova was crisp on the outside and marshmallow-y inside. The tart fruits and creamy accoutrement were easy on the eyes and taste buds. The dessert is sweet, but the fresh fruits reel it in, keeping the pavlova from feeling heavy.

I’m not sure what you’re doing this weekend, but I’m gonna try my hand at making pavlova. Who’s in?