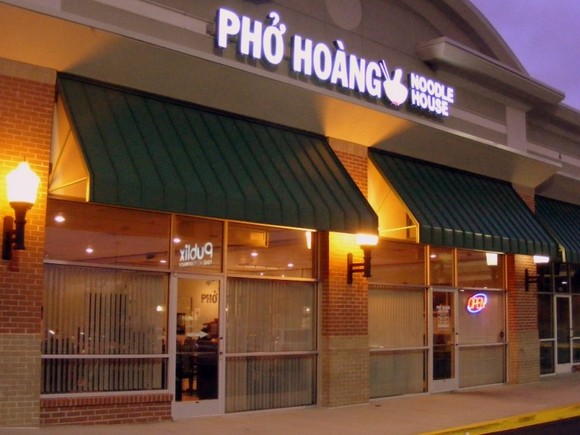 Unbeknownst to me, my family in Birmingham, Alabama has been eating bun bo and pho several times per month for much of 2008. They haven’t been making it at home—despite the presence of Andrea Nguyen‘s Into the Vietnamese Kitchen on my mom’s bookshelves. In fact, nuoc mam made it’s first appearance in our household only last week. Rather, it turns out that a new Vietnamese restaurant recently opened near our church in Hoover. No doubt, Vietnamese food in Alabama is a big deal—for many years Pho Que Huong on Green Springs was the only option in Birmingham—so I was plenty excited when I found out about Pho Hoang. On my first weekend back in town, I joined my mom, dad, and brother for a meal at their new favorite dinner spot.

In addition to my curiosity about what exactly Vietnamese food would look like in Birmingham, I was looking forward to the chance to impress the owners by speaking a bit of Vietnamese. I was unprepared for the possibility that there might be only teenagers manning the dining room.

One of them approached our table, and I asked him if he spoke Vietnamese. He nodded, and I said “toi song o Viet Nam mot nam roi.” Dammit, I already forgot the tense/words my teacher taught me that would clarify that I lived in Vietnam for a year but am no longer there! He looked at me blankly for a minute and then seemed to understand. He mumbled something that I couldn’t make out. “Em noi sao?” “Uong gi.” “Ah, uong gi. Nuoc lanh thoi.” The whole exchange was pretty awkward—not nearly as cool as I had imagined. He was an American kid, clearly more comfortable speaking English than Vietnamese (especially when conversing with someone whose Viet pronunciation is mediocre at best), and it just didn’t feel right. I resigned myself to speaking English for the rest of the meal. At least I could say the names of the dishes right. Maybe if I ever meet a member of the older generation at the restaurant I’ll try again. 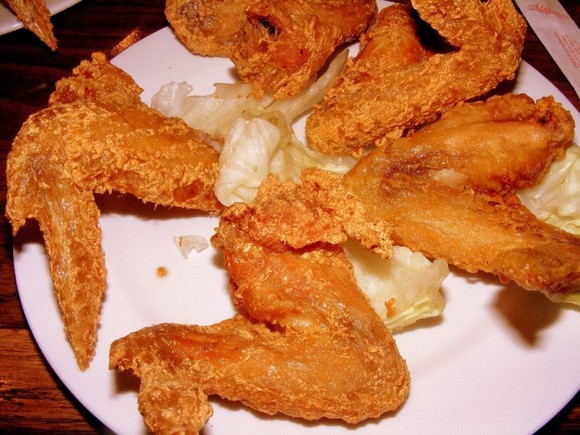 We proceeded to place our orders. The menu was heavy on noodles, as one might expect in a “Noodle House.” There were a smattering of other choices, including rice plates and hot pots, but overall it was less of an all-inclusive hodgepodge than I’ve witnessed at other Vietnamese restaurants in America. Apparently my family always starts off with the chicken wings. Maybe they’re not the most uniquely Vietnamese offering, but they did turn out to be tasty, and my mom and brother are obsessed. My family also loves the goi cuon, and I convinced them to order a plate of cha gio as well. It was funny having a waiter take our “appetizer” and “main course” orders separately. 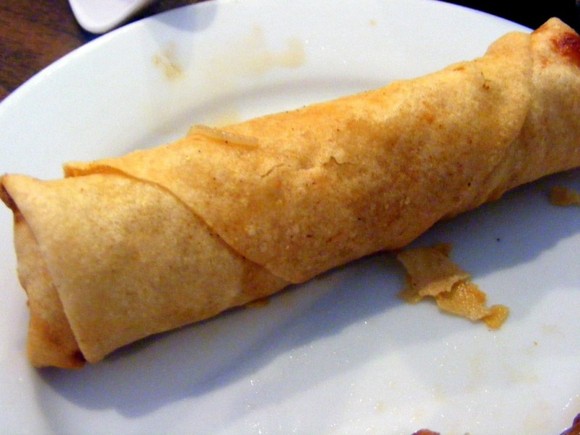 The goi cuon (not pictured) looked and tasted reasonably authentic, although they were served with a strange sauce that was only a distant relative of hoisin. They didn’t quite live up to my family’s enthusiastic praise, but then again, I’m spoiled. The cha gio, on the other hand, looked nothing like what I’ve come to expect. Maybe it’s impossible to get the right kind of wrappers in Birmingham—whatever the explanation, I would have identified these as spring rolls from some Asian country, but certainly not Vietnam. It would have been okay if they tasted awesome, but they didn’t. Biggest disappointment of the night. 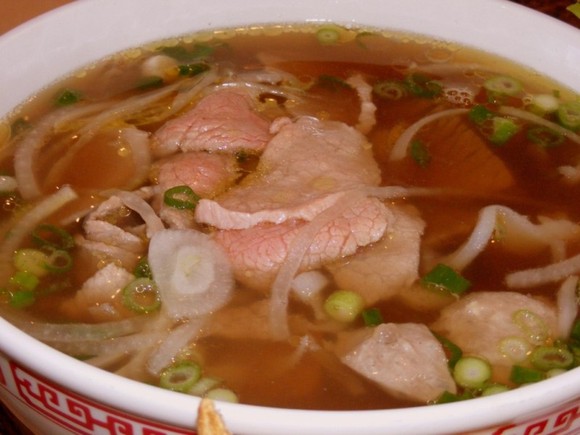 We all ordered noodles for our next course. My brother Dan got his standby, pho dac biet. Dac Biet—that’s my boy! I was surprised he liked the tripe and other interesting meat shapes and textures included in this preparation, but he has decided that it’s his favorite dish on the menu. It was an absolutely enormous bowl of pho. So much meat, and as many noodles as a bowl at the Muslim noodle shack in Kunming. Oh, America. At the end of the day, everyone except me took home leftovers. 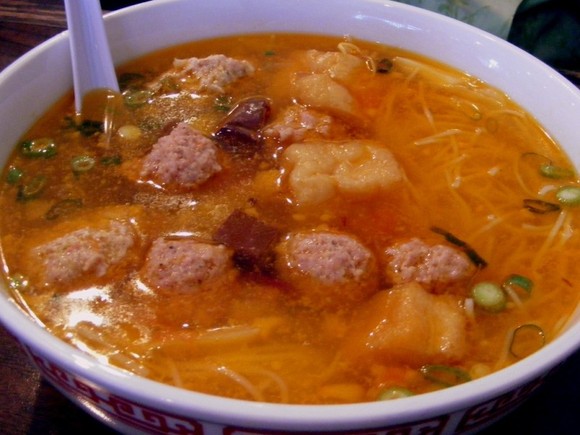 Someone recommended the bun rieu cua to my mom on her last visit, and she was not disappointed. The broth was truly delicious—light and yet flavorful. She later commented that she could eat a similar dish three meals a day and never grow tired of it. I’m inclined to agree. It was a little different than the bun rieu I’ve had in Vietnam, but I think I actually liked it better than the other versions I’ve tried, Thanh Hai excepted. 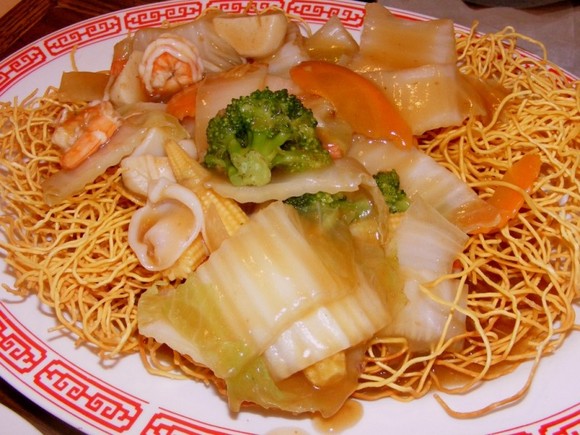 My Dad wanted to try something new and settled on the mi xao don. The noodles were thinner than I’m used to, more like Chinese pan-fried noodles, and the ratio of seafood/meat to greens was quite skewed compared to what you’d find in Vietnam. It seems to be an ongoing theme that certain ingredients remain unobtainable in our great state of Alabama. They also threw in some baby corn—what is this, Chinese food? Authenticity aside, the dish was really quite tasty. 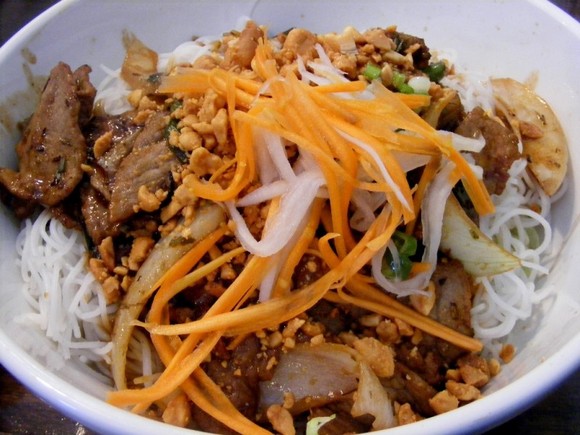 I didn’t feel like eating a hot soup, so I decided to try the bun thit xao. It was pretty solid, although I was disappointed that the dominant flavor turned out to be peanut rather than lemongrass. As with the other dishes, the portion size was large, as was the price ($6.99). But don’t get me wrong—by American standards, Pho Hoang is certainly a great deal for lunch or dinner. I’ve never been so stuffed after a single bowl of bun.

Overall, I was quite pleased with the meal. It wasn’t perfectly authentic or perfectly delicious, and the cha gio were sad, but for Birmingham, it was pretty damn good. The ambience was similar to what I’ve seen in California: strip mall location, sparsely decorated but clean interior, etc., but unfortunately there were a lot of empty tables when we visited. I sure hope they make it.