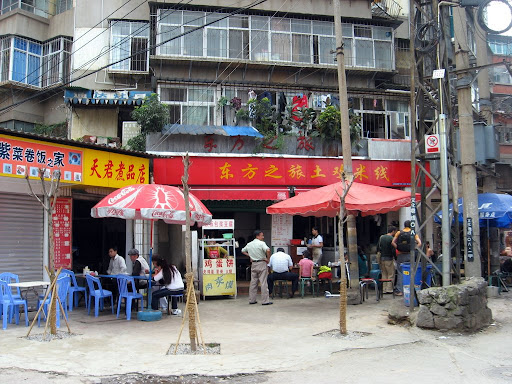 Our first full day in Kunming started a bit past noon. We missed our hotel’s complimentary breakfast by two hours so we headed out to town in search of “breakfast.” Just a couple of paces from the hotel, we found a cluster of al fresco vendors dishing up all sorts of goodness. Without English menus or grasp of Chinese characters, we resorted to scanning the crowd of diners and pointing to what looked tasty. 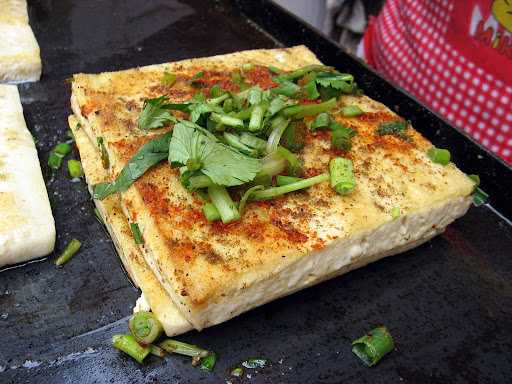 First up, fried tofu with scallions and cilantro sprinkled with some intense chili powder (3 RMB). The tofu’s texture was silky, yet firm. The Astronomer and I both enjoyed this spicy jolt early in the day. 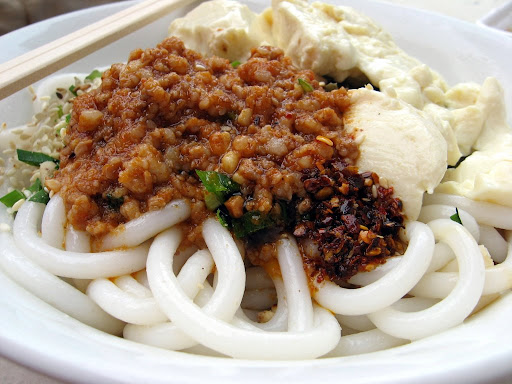 Nooooodles (4 RMB)! These ones were round and thick like engorged spaghetti. The noodles were topped with an oily pork mixture, silken tofu, sesame seeds, chili oil and scallions. The Astronomer and I carefully scooped the chilies out of the bowl to avoid searing our tongues. The noodles really made the dish special. 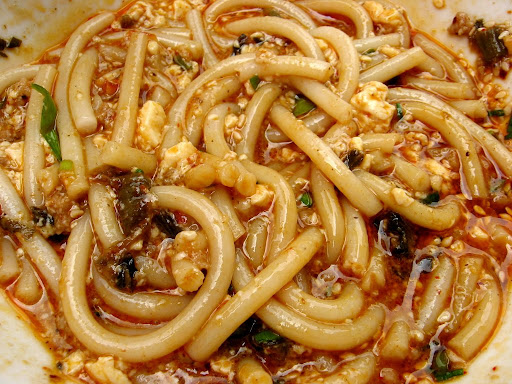 Here’s what the noodles looked like all mixed together. Although the oily pork mixture didn’t look too imposing at the start, it really managed to flavor and color the entire dish. After a cheap and filling breakfast, The Astronomer and I were ready to seize the day. Our plan was to catch a mini bus to see the Bamboo Temple located 12 kilometers away. Supposedly there are statues of surfing Buddhas! 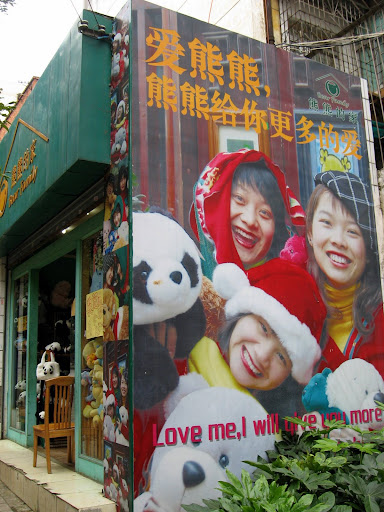 On our way to the mini bus station, I perused a store called Bear Family. It was filled with, you guessed it, BEARS! I am fascinated by how infantile Asian women are allowed to be. The crowd wasn’t my scene, but the store’s slogan drew me in, “Love me, I will give you more!” 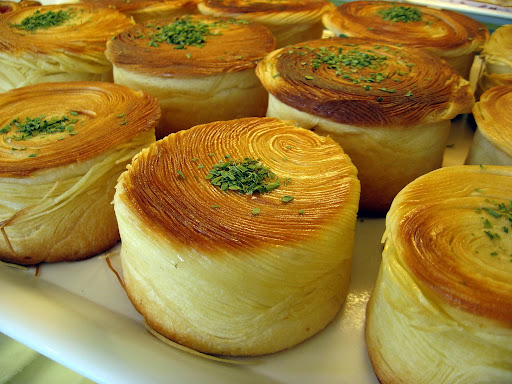 Similar to Hong Kong, Kunming is filled with wonderful bakeries. The Astronomer picked up this lovely creation at Jiahua (3 RMB). We’d never seen anything quite like it—swirly and fancy! 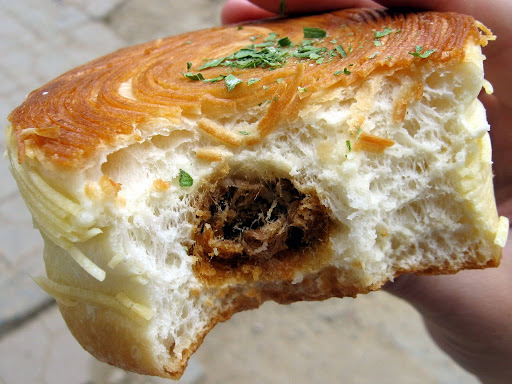 A couple of bites in, The Astronomer thought the baked good was a simple buttery number. However, towards the center, he hit gold, AKA pork floss! Unfortunately, there was also some mayo that The Astronomer scooped out with his fingers and flicked to the sidewalk in disgust. Ick. 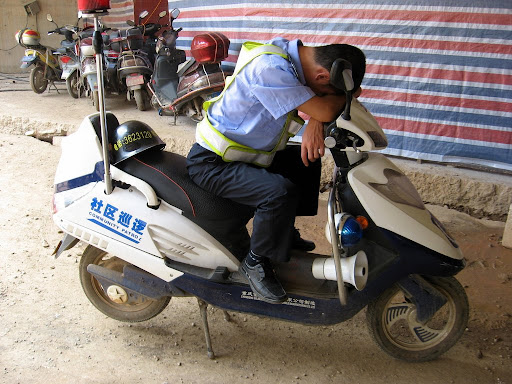 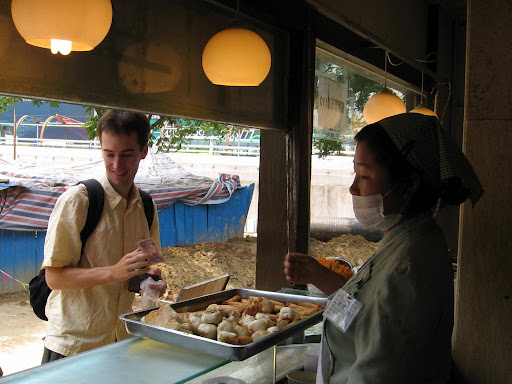 After walking a solid 400 meters without any food, The Astronomer ducked into a stall selling dumplings and picked up one (0.5 RMB). 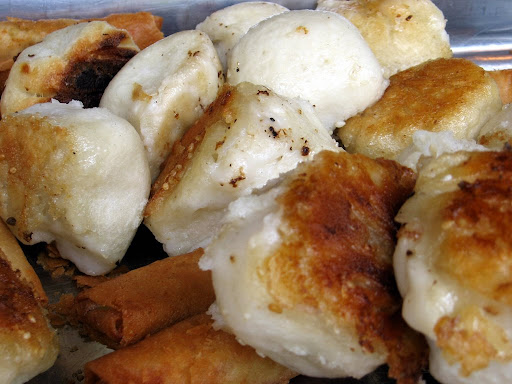 The dumplings had a wee bit of pork and lots of doughy breading. Not spectacular, but certainly not shabby for less than a kuai! 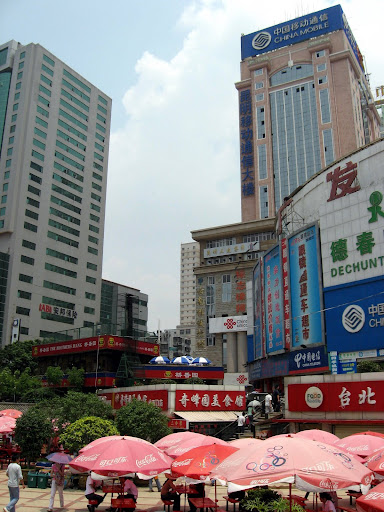 A square in downtown Kunming. It’s hard to fathom how a city can be so developed and still so inexpensive to live in. Very impressive. 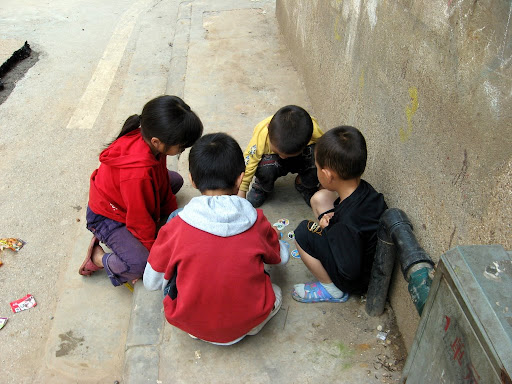 While on the search for Muslim eats on Shuncheng Jie Street, we found some kids playing pogs! They were so engrossed in their game that they didn’t even notice me spying. 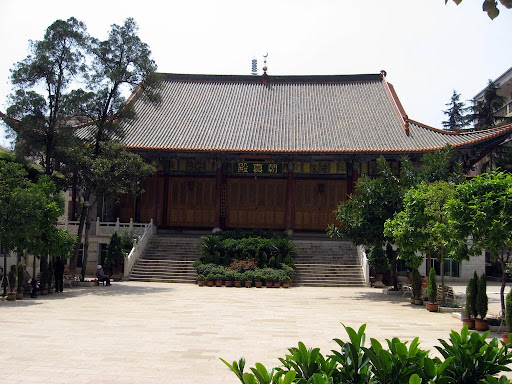 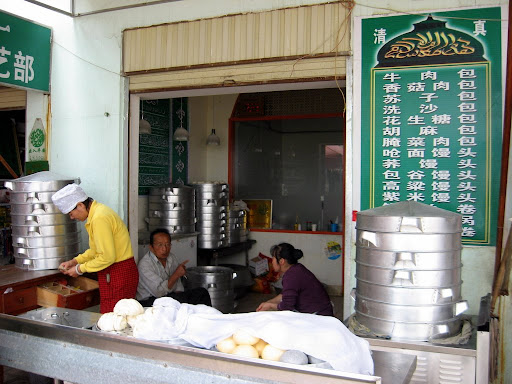 According to our handy dandy Lonely Planet, the area around Shuncheng Jie Street is supposed to be brimming with kebab stands and Halal noodles, but we only found one lonely stand serving steamed buns (1 RMB). The construction in the area seems to have pushed this community elsewhere. 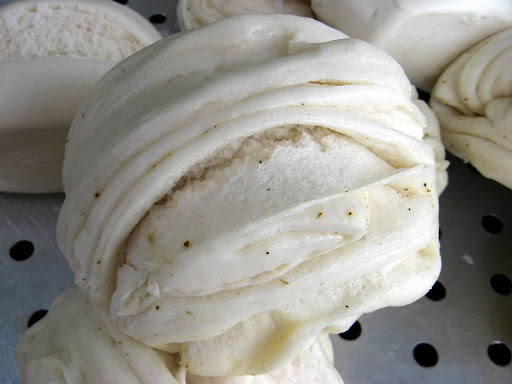 I expected the steamed bun to taste sweet like Vietnamese banh bao, but it ended up tasting neutral. The best part was the texture—the bun was composed of a zillion thin layers. After struggling to locate the mini bus pick-up point, The Astronomer and I decided that we’d rather nap than see surfing Buddhas, so we headed back to the hotel. 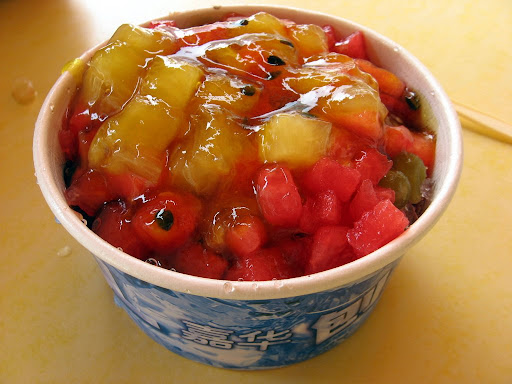 On our walk back, we stopped at Jiahua again. When we swung by earlier to pick up a pastry, I noticed that all the kids eating were eating a treat that resembled fro-yo with fresh fruit, a la Pinkberry. I’ve yet to partake in the fro-yo craze, so I was really excited to give it a try. 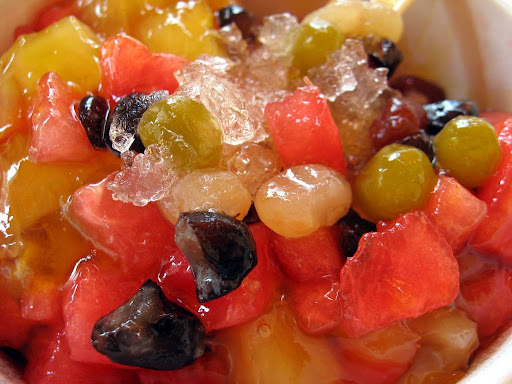 Turns out the kids were just eating shaved ice topped with fresh fruit and beans (4 RMB). It doesn’t sound like anything special, but trust us, it really was. The passion fruit syrup permeated every ingredient and the beans texture became appealing due to the ice. The Astronomer liked it much more than che. 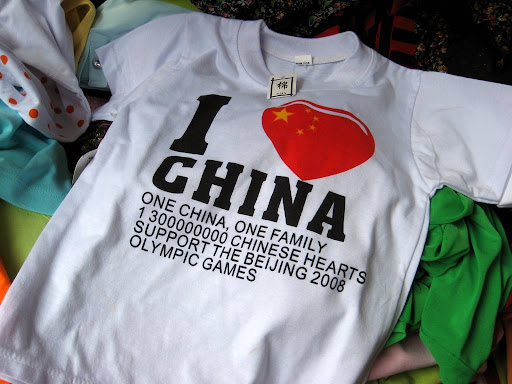 As expected, the Chinese are really into the Olympic games. There are large screen TVs set up in public places for everyone to watch the competition unfolding. I was hoping to find more unofficial gear for sale, but this is the lone T-shirt I’ve seen thus far. It would’ve been mine, but it was much too small. After napping and watching the Games on TV, The Astronomer and I went on a quality run around the city and Green Lake. By the way, Kunming is located at 6,200 feet, so we’re technically training at elevation. I hope to reap the speedy benefits when I return to sea level. 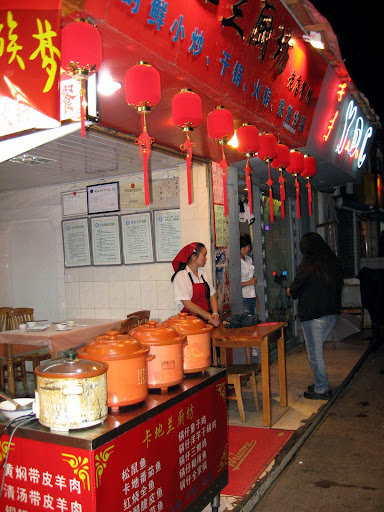 After our run, we went to a nearby restaurant for a pre-dinner snack because our dinner destination was quite a ways away. 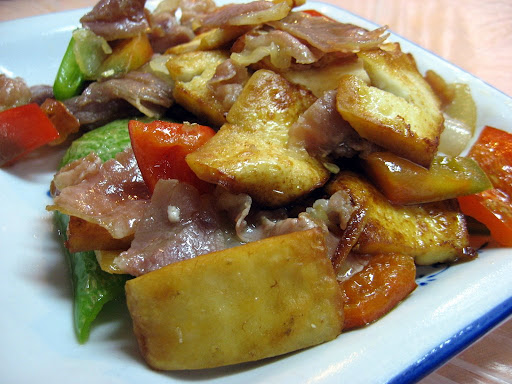 We ordered fried goat cheese ( 乳饼 rǔbǐng) with ham (22 RMB). According to Diana of Appetite for China, goat cheese is “one of the well-loved specialties of Yunnan cuisine. It comes from the Bai and Sani minorities of Yunnan province, and is made by heating fresh goat’s milk with a souring agent until firm, then either pan-fried or steamed before serving.”

Although the dish resembles stir-fried tofu with vegetables, it was SO much more than that. The ham was sliced thinly and had a decadent ration of meat to fat and the goat cheese—OH, THE GOAT CHEESE—was firmer than the varieties stateside, and much milder. Truly, it was nothing short of magical! Fried goat cheese with ham is just so crazy delicious that we’re gonna have to return and have it once more before we leave this town. 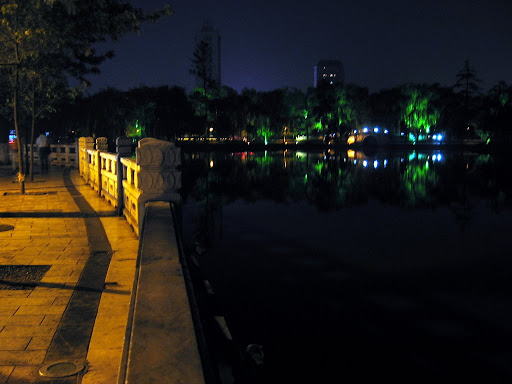 A view of Green Lake on our walk to dinner destination number two—Brothers Jiang. After a mile and a half walk, we arrived at the eatery around 9:30 PM and found it closed. We were so bummed. 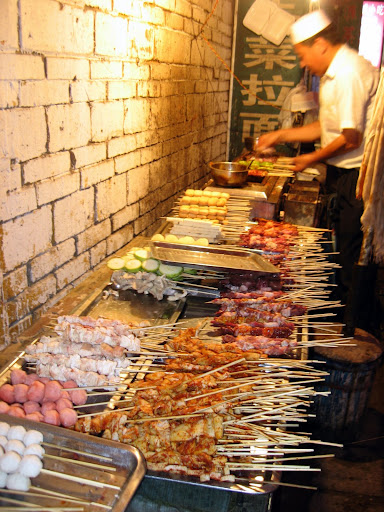 Back in our ‘hood, we ate at a Muslim restaurant serving fresh noodles and lovelies on a stick—our standby late-night foodstuffs. 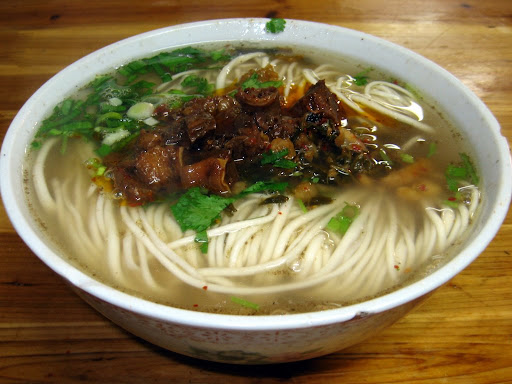 The Astronomer and I both ordered the fresh noodles in broth (5 RMB). Both servings were made to order in front of our eyes—the chef’s skilled hands transformed a blob of dough into long strands of perfectly uniform noodles in seconds.  How’d he do that? The noodles were topped with a savory mixture of cubed beef and mustard greens and a simple broth. The Astronomer made a keen observation as we were eating our luxurious noodles—whereas the broth is the star of the show in Vietnamese cuisine, in Kunming, the noodles outshine the broth. He’s totally right! The serving size here, as with all of the eateries we’ve frequented in China, was super-sized. The Astronomer had to help me out with this one. 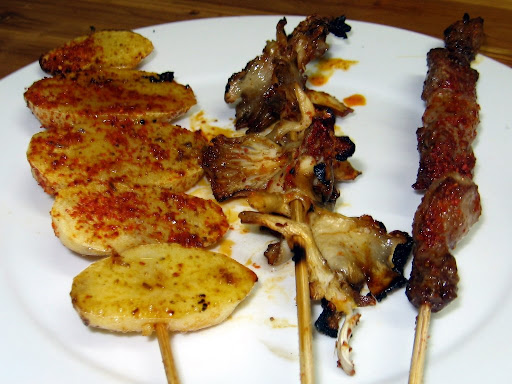 The Astronomer went for potatoes and lamb on a stick (1 RMB each). The lamb stick alternated between cubes of meat and fat, and The Astronomer found it fantastic. My ‘shrooms on a stick were fabulous as well. This could be paradise.

11 thoughts on “Eating in Kunming I”