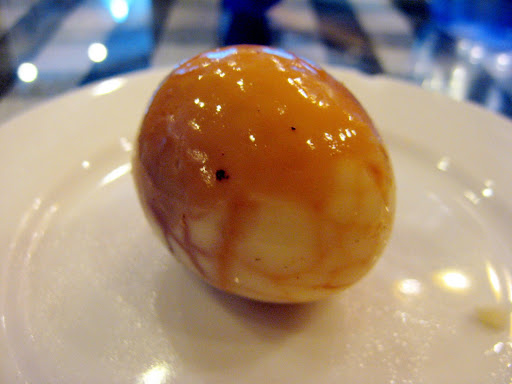 My second morning in Kunming started with a tea egg, or 茶葉蛋 if you’re into that kind of thing. According to Wiki, “Tea eggs are simply hard-boiled eggs that have been further stewed in a salted tea liquid. Other flavorings such as soy sauce and Chinese five-spice powder are often added as well. The dark color of the tea also stains through the cracks of the eggs creating a pattern on the peeled eggs that resembles the crazing of some ceramic glaze surfaces.” The tea egg tasted like a hard boiled egg with a smidgen of five-spice flavoring. Not the most exciting breakfast, but our hotel’s spread left something to be desired. 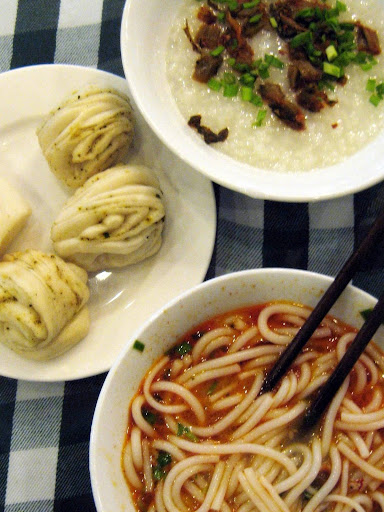 The Astronomer found a couple of decent eats within the sea of disappointments. The noodles were the best of the bunch and similar to the ones we’ve had earlier. The buns were cold by the time we arrived even though they were sitting in a steamer. The congee was terrible, but it’s probably because foreigners don’t know how to garnish it properly. No more hotel breakfasts for us from this point forward. 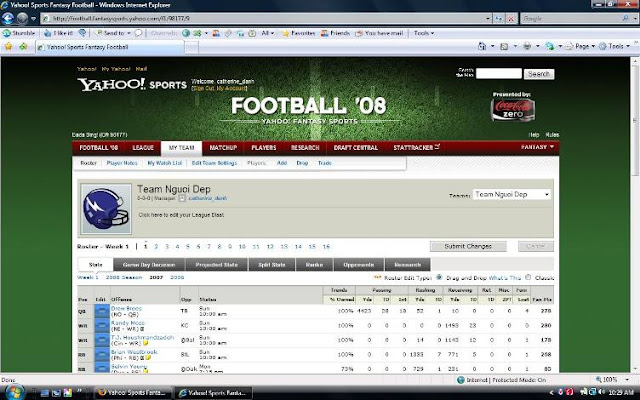 After breakfast, we returned to the hotel room to draft my fantasy football team, Team Nguoi Dep. The league I’ve participated in for the past three years is comprised of cousins, uncles and a brother. It’s a hyper-competitive league of 14 teams, but Team Nguoi Dep managed to finish second last year! The Astronomer deserves the credit for carefully managing the team. 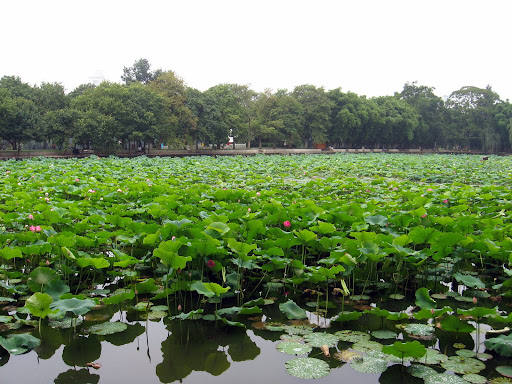 After drafting, we headed out to Brothers Jiang, which is located on the edge of Green Lake. The lake is divided into different sections—here’s a view of the lotus pond. 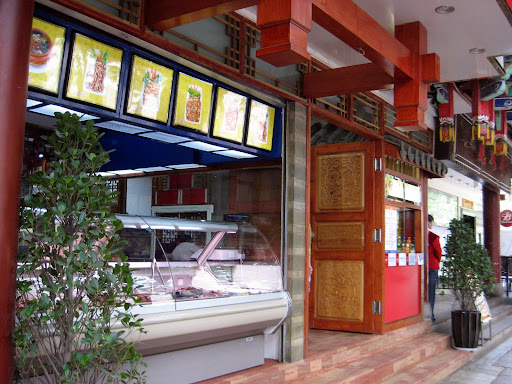 Brothers Jiang’s signature offering is a little something something called “Across the Bridge Rice Noodles.” The dish originated in Kunming and has a history of more than 100 years. Here’s the legend behind the dish:

In Mengzi, there was a small island located in a lake called Nanhu where a young man stayed to prepare for the national examination. Everyday, his wife crossed a bridge to bring him meals, but the meal turned cold by the time she arrived. One day, his wife cooked a pot of chicken soup and noticed that the layer of oil on top of the soup kept it warm. When she added raw slices of fish and meat to the soup, they were cooked instantly, and very delicious. From that point on, she took the soup, meat and rice noodles, and crossed the bridge to bring a warm meal to her husband. Hence the name “Across the Bridge Rice Noo­dles.” 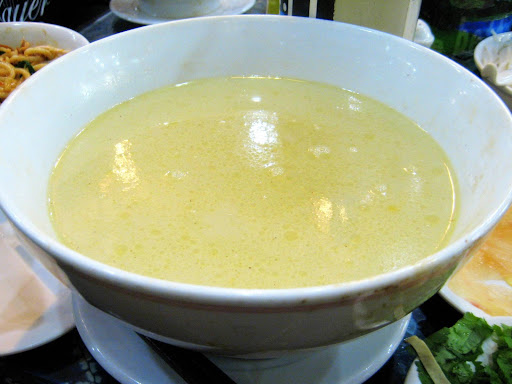 Here’s the chicken broth—notice the thin layer of fat floating atop the soup and the lack of steam. Wifey was a genius! 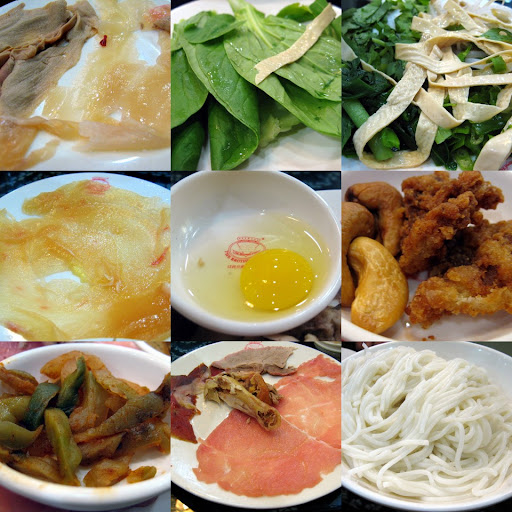 There were a number of different versions of Across the Bridge Rice Noodles on the menu, we enjoyed a mid-range one that cost 15 RMB. Our mix-in items included thin slices of pork and chicken, chicken bones, ham, pickled vegetables, cashews, fried fat, a raw quail’s egg, spinach, cilantro, scallions and tofu skin strands. 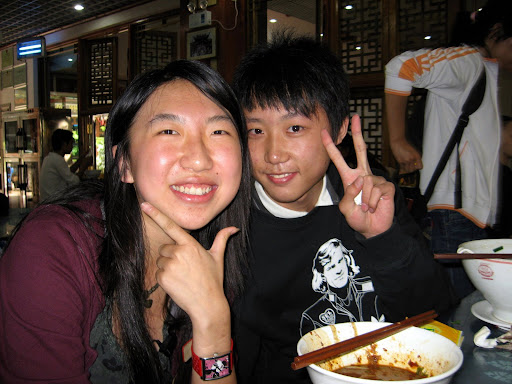 We met two local college students, Yang Lisha (L) and Chen Xiao, who were kind (and English proficient) enough to instruct us on how to assemble and consume the soup. We added the raw meat first, then the bones and eggs, and lastly, the vegetable items. After eating so many deeply flavorful broth and noodle combinations, this chicken noodle soup number struck us as bland. Wah wah. It was so boring that The Astronomer and I felt compelled to add chili oil to the broth even though it was against the rules. 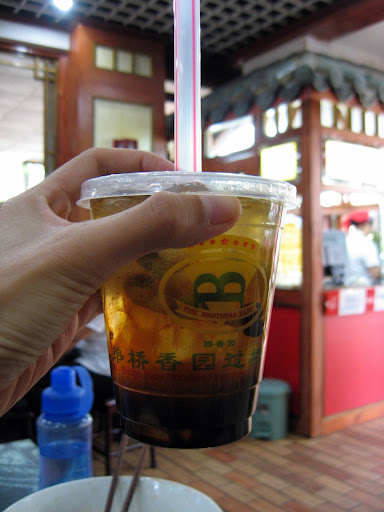 Our table mates suggested that I order this drink (2.5 RMB) because it was a local specialty. The drink tasted like sweet tea with grass jelly juice. Bits of beans and agar agar square floated in the drink and were sucked up via a large straw. 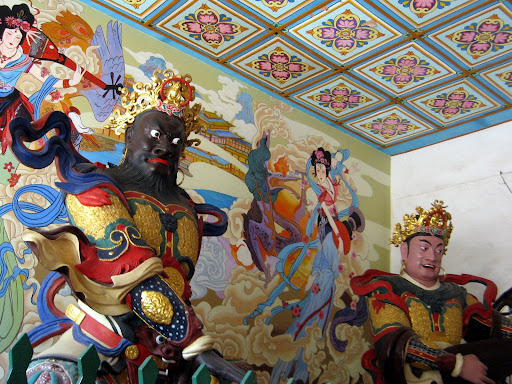 After lunch we caught a cab and zoomed to Qiongzhu Temple (or Bamboo Temple) located 12 kilometers from downtown Kunming. The temple is situated on Yuan Mountain and was first built in the Yuan Dynasty. During its history, spanning nearly 1,000 years, the Qiongzhu Temple has been burnt to ashes several times and then reconstructed. The present structure mostly dates from the late Qing Dynasty. Here are two of the four Guardian Kings in the entrance hall. Freaky fellas, aren’t they? 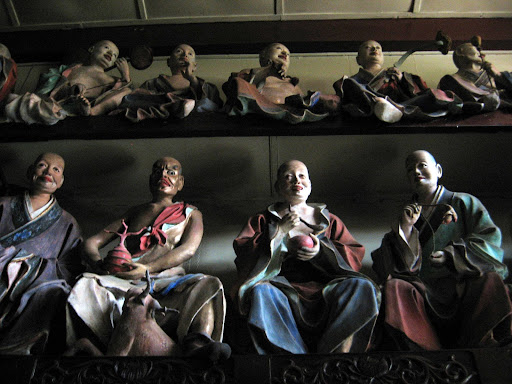 “The temple’s most outstanding artistic (and perhaps spiritual) feature is the distinguished, finely crafted statues of the 500 Luohans (Buddhist Arhats or ‘enlightened ones’) sculpted by the brilliant artist, Li Guangxiu, a famous folk clay artist from Sichuan Province. He took his students to Kunming where they spent seven years (1883-1890) preparing the sculptures.

Regarded as ‘a pearl in the treasure house of oriental sculpture,’ these life-size clay figures came from Li Guangxiu’s and his apprentices’ deep study of people and their inner personalities. After seven years of study and work, the immense undertaking was completed. Each of the statues represents an aspect of human life with great accuracy and skill and looks just like a real person frozen in a moment in time.” 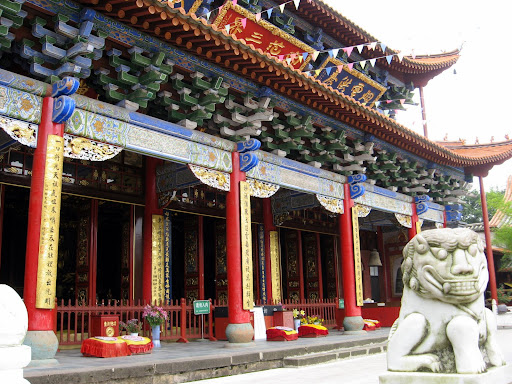 The “surfing Buddhas” are located inside the Temple’s main hall. 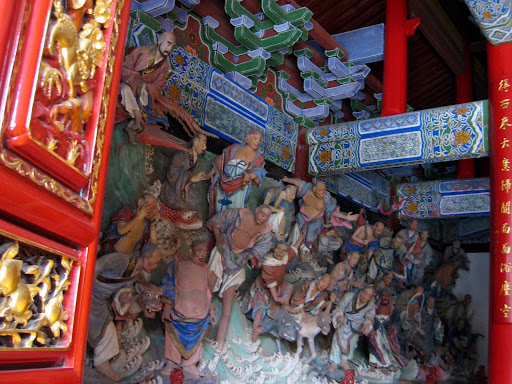 The left side of the main Temple. 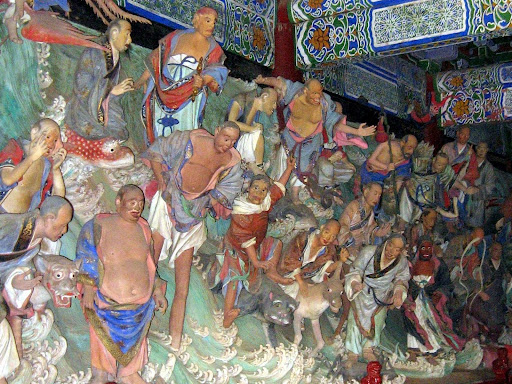 “The arhats stand beside the central Buddha in six rows, with three levels in each row. Each arhat is about one meter tall. Each of the 500 arhats has a different expression and gesture. This is in complete contrast to the usual fixed style of Buddhist sculptures. With the religious subjects and use of exaggeration, the ancient artists created lively images. Some of them are reaching for the moon with extremely long arms, some are crossing the ocean on extra long legs. There are bare-footed monks and naked-bellied Buddhas. Some are lost in deep thought, some are telling each other good news. Some are tranquil, some angry, some surprised, some curious. One is scratching his back, another is poking his ear. Here are most of the expressions of man in this world—a representation of life as it really is.” 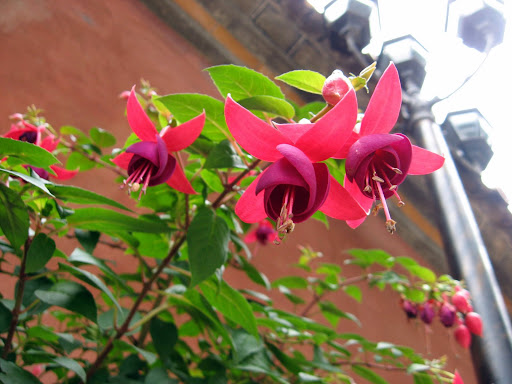 The Temple’s grounds were filled with unusual flowers. These were my favorites—drooping hot pink and magenta blooms that grow upside down. 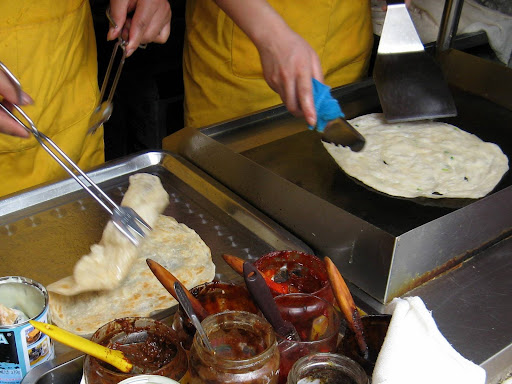 After we taxied back to town, we were ready to resume nibbling. The Astronomer serendipitously stumbled upon a roti vendor. Unlike the sweet ones in Bangkok, these contained bits of scallion and were much more savory even though they were coated with sweetened condensed milk. 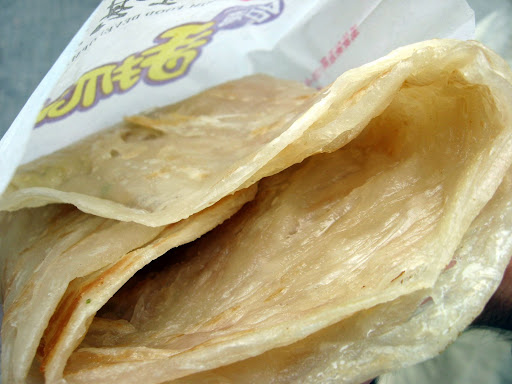 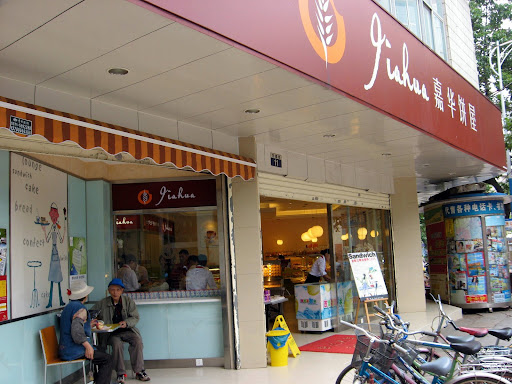 My nibble of choice was at Jiahua Bakery. 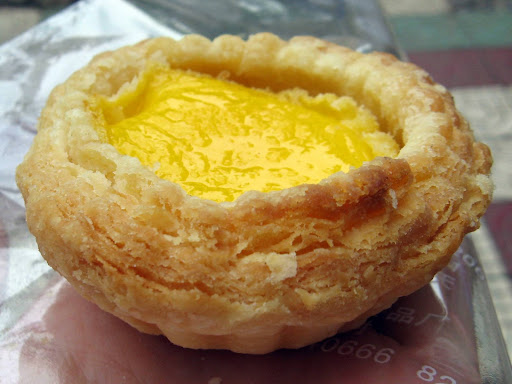 I procured a single egg tart (1 RMB). The crust was crumbly without being buttery (I like crumbly AND buttery) and the innards were sweet and eggy, but a bit curdled. But with prices this low, it’s hard to complain! After our afternoon snacks, we returned to the hotel, napped and went for a run. 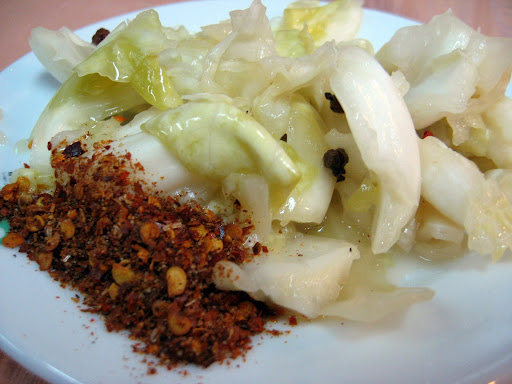 For dinner, we returned to the goat cheese restaurant from yesterday—this time for a full meal. We were presented with a plate of pickled lettuce to accompany our selections. In addition to vinegar, the greens were marinated in cloves, which made them too intense for these two. 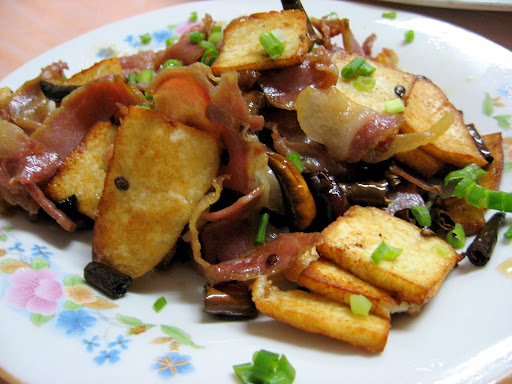 Closer than my peeps you are to me—fried goat cheese with ham! Unlike last night’s version, this one didn’t contain bell peppers. It did however have a fare number of chilies, a smattering of fresh scallions and slices of ginger. 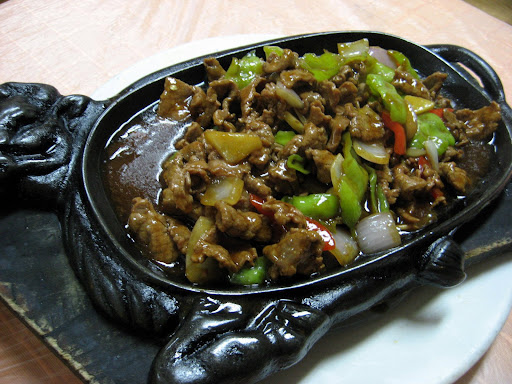 The restaurant seemed to specialize in sizzling plates, so we opted for the beef one. The preparation was classic Chinese with chilies, garlic, ginger, onions, red bell peppers and soy sauce. The pieces of beef were really tender and the sauce flavored steamed rice well. Eating cow on a sizzling cow-shaped platter is a real treat! 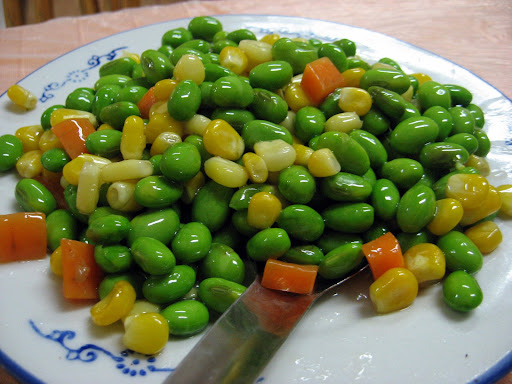 The veggie portion of our meal was just as good as the beef and cheese dishes. The corn, beans and carrots were SO fresh and sauteed in butter. I couldn’t get over how sweet the corn was. Mmm!

8 thoughts on “Eating in Kunming II”