As long as the powers that be allow it, gas•tron•o•my is blogging live from China! Eee! There’s still so much to share from Vietnam, but since the eyes of the world are currently focused on China, I thought it would be most appropriate to share my travels as they’re actually taking place—a novel concept considering the back log of posts in my queue!

Ever since The Astronomer and I decided to venture on this yearlong journey to Vietnam, our plan has been to travel home via Beijing in time for the Summer Games. In addition to being food enthusiasts, we’re also jocks at heart. 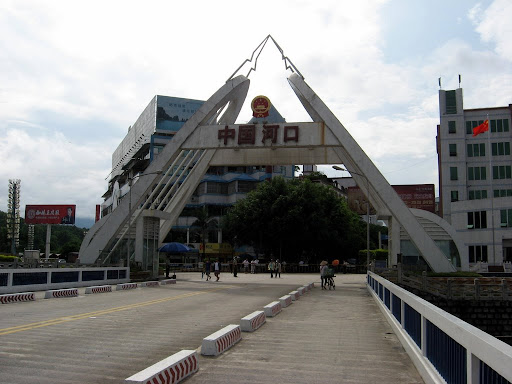 We entered Heiku, China via Lao Cai, Vietnam. It’s pretty crazy how one side of the bridge is China and the other is Vietnam. Boundaries and borders are fascinating. 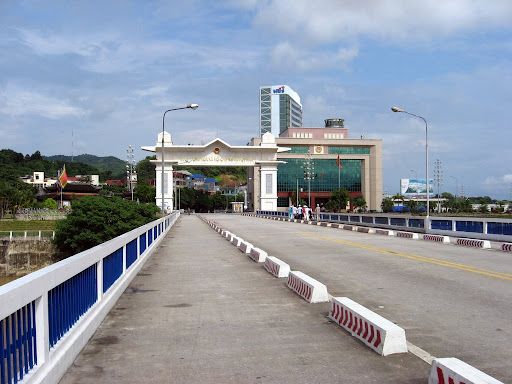 Farewell, Vietnam. It’s been an absolute pleasure. As I crossed the bridge into China, I kept singing to myself, “It’s the end of the world as we know it. And I feel fine.” 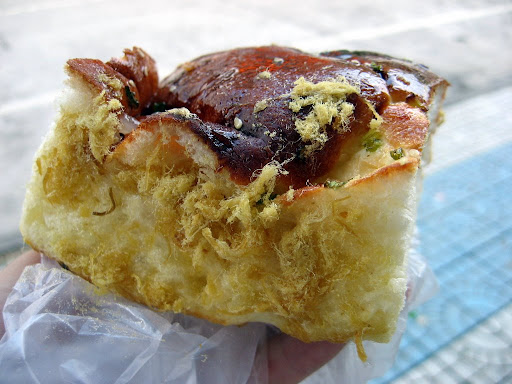 After finding a suitable hotel, The Astronomer and I sought an ATM to procure some Chinese currency (RMB) in order to buy me a snack and to buy us bus tickets to Kunming. I settled on a squishy white bread concoction with pork floss and scallion oil for my pre-run nibble. Even though the baked good was the size of my hand, the lack of density made it possible to down it in three bites.

After changing into our running gear, we jogged along the Red River. We knew for certain that we were no longer in Vietnam as we trucked along the manicured riverside path because as anyone whose ever been to Vietnam knows, the rivers are stinky, filthy and definitely not exercise friendly.

Upon returning to our hotel post-run, we discovered that there was no longer running water in our room (or in the entire facility). Wah wah. For the next hour or so, we argued with the manager for our security deposit and searched for a hotel with working showers. By the time we finally found suitable shelter, I was too angry and exhausted to eat dinner, which is a shame because there was some really good looking stuff on the streets of Heiku. 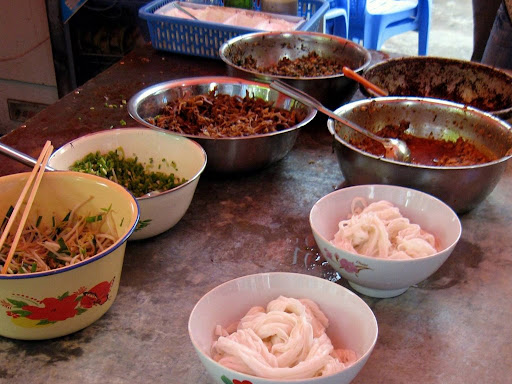 We woke up early the following morning to have a hearty breakfast before boarding our 11+ hour bus ride to Kunming. Most of the eateries with storefronts were closed at 8 AM, which was another sign that we were no longer in Vietnam. We stumbled upon a vendor under an awning and tucked in for some hot noodle soup.

Since neither of us spoke Chinese, we pointed to a bowl of noodles and smiled and then pointed to the chilies and shook our heads no. We’ll take everything but the chilies, sir. 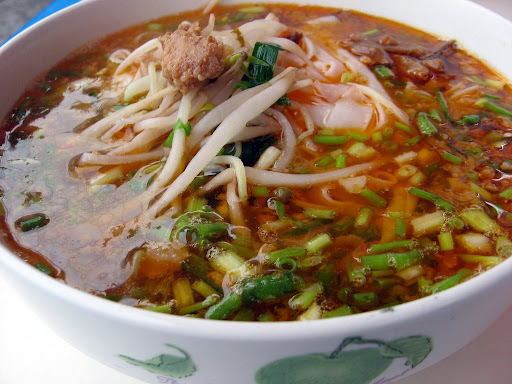 After we placed our order, the vendor added fresh scallions, bean sprouts, mushrooms and a salty/oily pork mixture atop the noodles and poured a hot broth into the bowl. The broth was actually brown, but turned bright orange due to the oily pork mixture. Whereas the portions in Vietnam are quite modest, this bowl of noodles was nothing short of hearty. 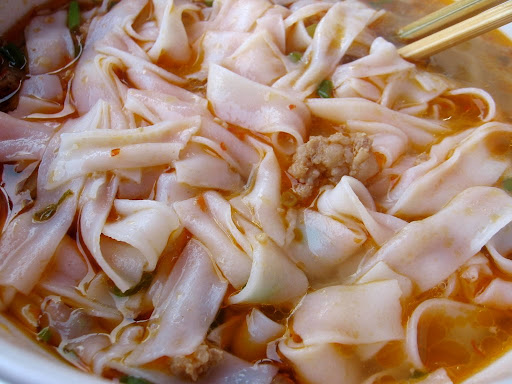 The wide pappardelle-like noodles were my favorite part. Although I didn’t have high hopes for a bowl of noodles served in a parking lot, these were so so good that I couldn’t stop talking about them for the rest of the day. Two bowls of noodles set us back 10 RMB ($1 USD = 6.8 RMB). 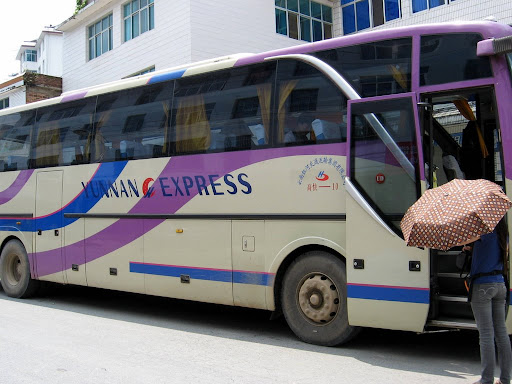 We boarded the Yunnan Express at 8:45 AM and got comfy because eleven hours ain’t no joke. 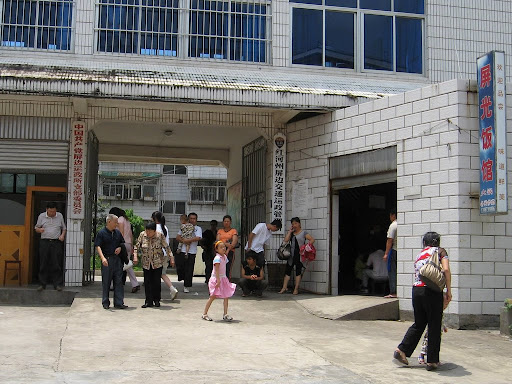 A little past noon, we stopped over for some lunch and a restroom break. The Astronomer and I didn’t know what the heck was going on, so we mimicked our bus mates. 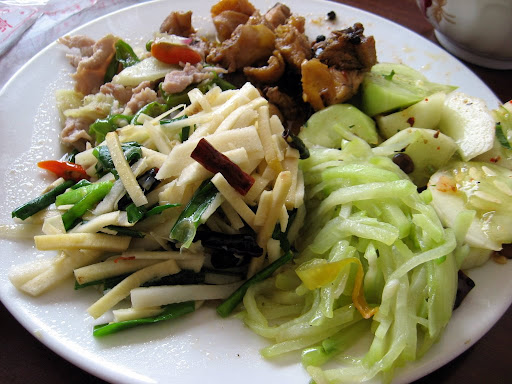 Inside a darkish room, a couple of workers were serving up meat, veggies, and rice for 10 RMB a plate. Even though we weren’t hungry, we played along and bought some food. Our hodgepodge of Chinese delights included stir-fried chayote (a familiar treat and my favorite item), cucumber salad, bamboo shoots and two pork dishes. 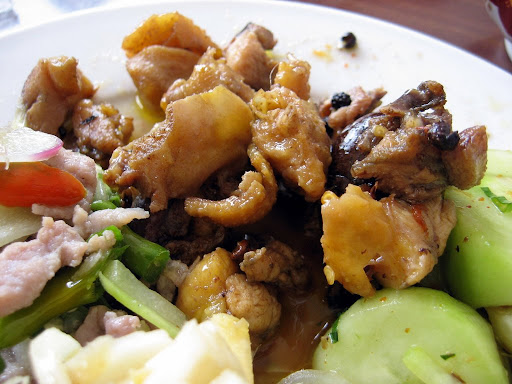 This porky number resembled what we knew to be Chinese food in America, with the inconvenient addition of bones. Everything but the chayote was too spicy for me. I wish I were tougher. 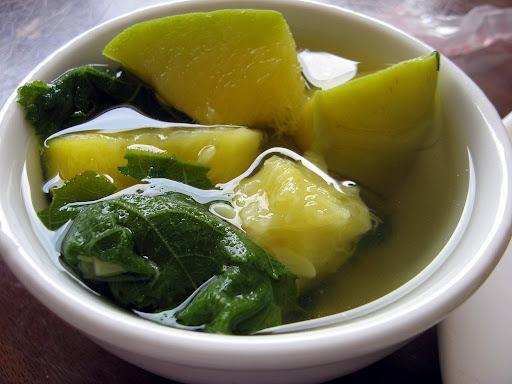 The accompanying squash soup was the blandest thing ever, but it turned out to be a good thing because after eating such fiery foods, I needed a calming broth. 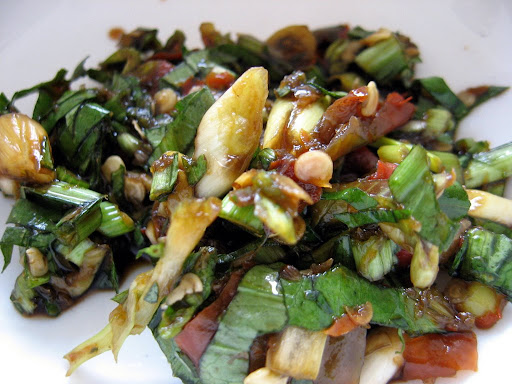 All the locals were garnishing with this great-looking cilantro, scallion, garlic, soy sauce and chili salsa. As expected, it was much to spicy for me. After lunch, we boarded the bus and got comfy once more. 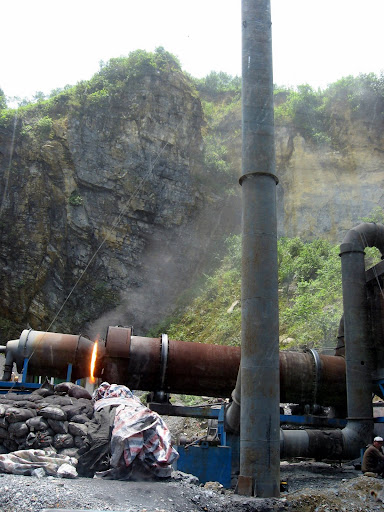 The scenery from Heiku to Kunming is gorgeous—seemingly endless green hills and mountains. The only disturbing sight was this burning-action on the side of the road. 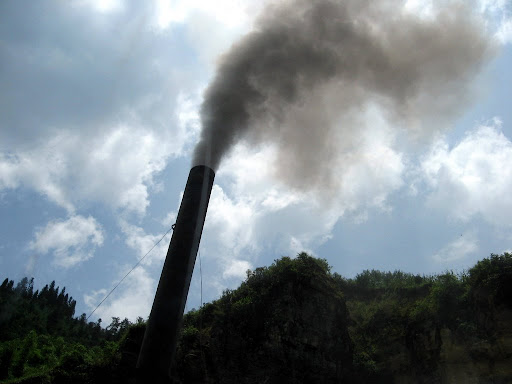 And the huge cloud of smoke as a result of the burning. 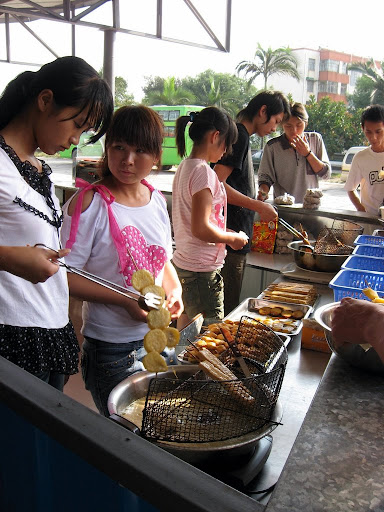 A few hours later, we were rewarded with another rest stop! This one specialized in deep-fried meats on a stick! 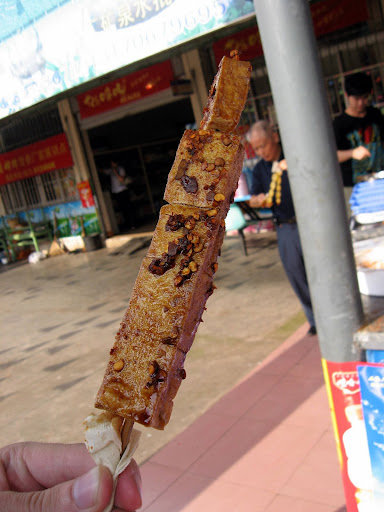 The Astronomer went for deep-fried blocks of tofu sprinkled with chili flakes, which was hot and good! He would have ordered another stick, but the conductor was screaming, “all aboard!” Or so I translated in my head. 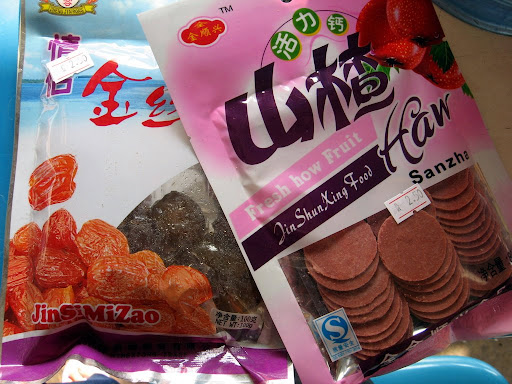 I bought some snacks at the convenient store. I was hoping that the product on the left were sweet and sour plums, but they turned out to be wickedly sweet dates. I was totally disappointed. Good thing I had haw flakes because they never let me down.

We finally arrived in Kunming a little after 8 PM. 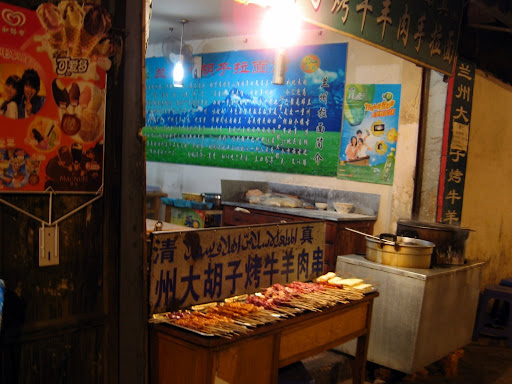 After the cabbie dropped us off at our hotel near Yunnan University, we suited up for a run. It turned out to be a short one because I was mighty hungry. We started searching for dinner at 11 PM and were bummed that most places were closed. What kind of college town is this? Luckily we found a hole-in-the-wall serving up grilled meats on a stick and hot noodles. 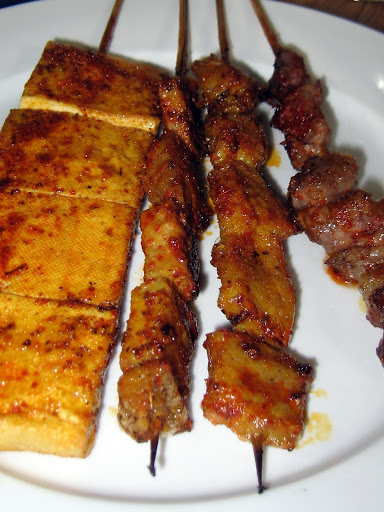 I ordered two sticks of tofu (or so I thought). The one on the left was definitely tofu, but the one next to it turned out to be something totally different—it tasted like a cross between squid and pork fat! The Astronomer ordered a stick of the faux tofu as well and a stick of good ‘ol beef. 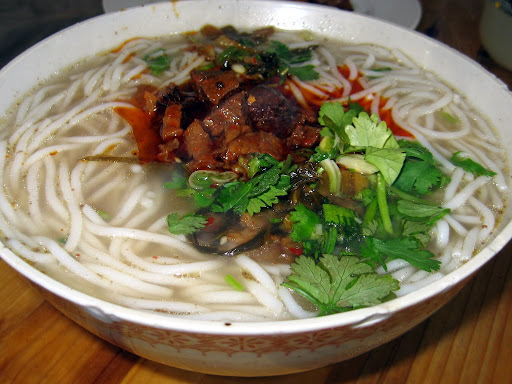 A bowl of bun bo Kunming. Not as tasty as the soup from Heiku, but pretty decent considering the options available. The broth started out brown, but after mixing around the oily beef it turned orange. Our entire meal of meats on a stick and noodles cost a mere 13 RMB. 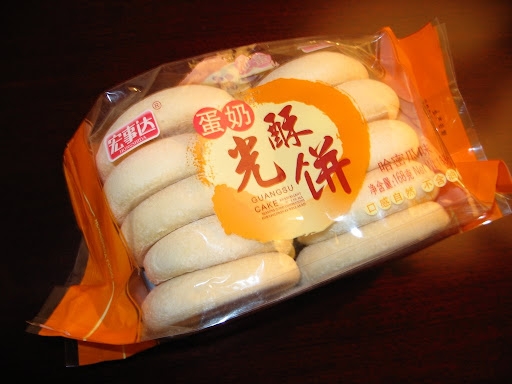 On the way back to our hotel, The Astronomer bought a package of guangsu cake for dessert (6.5 RMB). It tasted really terrible—chalky, saccharine-laced pieces of foam.

16 thoughts on “The Road to Bejing: Heiku to Kunming”