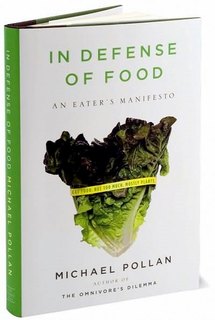 About: In his hugely influential treatise The Omnivore’s Dilemma, Pollan traced a direct line between the industrialization of our food supply and the degradation of the environment. His new book takes up where the previous work left off. Examining the question of what to eat from the perspective of health, this powerfully argued, thoroughly researched and elegant manifesto cuts straight to the chase with a maxim that is deceptively simple: Eat food, not too much, mostly plants. But as Pollan explains, food in a country that is driven by a thirty-two billion-dollar marketing machine is both a loaded term and, in its purest sense, a holy grail. The first section of his three-part essay refutes the authority of the diet bullies, pointing up the confluence of interests among manufacturers of processed foods, marketers and nutritional scientists—a cabal whose nutritional advice has given rise to a notably unhealthy preoccupation with nutrition and diet and the idea of eating healthily. The second portion vivisects the Western diet, questioning, among other sacred cows, the idea that dietary fat leads to chronic illness. A writer of great subtlety, Pollan doesn’t preach to the choir; in fact, rarely does he preach at all, preferring to lets the facts speak for themselves. From Publishers Weekly.

My Thoughts: As anticipated, In Defense of Food was a great read. Pollan’s voice is clear and concise, while his arguments are logical and well-laid out. Rather than spend several paragraphs here writing about how much I agree with the man and his words, I think it’d be more useful to focus on the real changes that eaters like you and me can make in our daily lives in order to become more mindful omnivores. These steps toward a collective change are discussed in the final third of In Defense of Food. After I wrap up a book, I’m usually quick to start another, so this list is a way of distilling and remembering Pollan’s most important lessons.

Most of the packaged foods that I consume come from Trader Joe’s and almost always adhere to rules A through D.

There was definitely a time in my life when I considered foods boasting health claims superior to those without, but now I understand that they’re just a clever marketing ploy.

Did you know that scientists can find antioxidants in practically every fruit and vegetable? Just eat “mostly plants” and good health will follow.

One of these days, I’m gonna purchase a whole grass-fed cow from an indie farmer just like The Astronomer’s mom does. Until then, no grains for my moo.

I’m more or less a creature of habit so eating a varied diet doesn’t come naturally. These days when I go produce shopping, I always try to purchase a foreign vegetation like tomatillos or prickly pear cactus fruit in order to expand my food horizons and recipe repertoire.

Foods grown in healthy soils are packed with more goodness (i.e. flavor and nutrients). Pollan’s research uncovered that a modern day apple has a third less nutrients than an apple produced before the agro-industrial complex took hold.

Plants and animals that are given room to breathe and roam are not only tastier, but healthier too.

It was interesting to read that Americans spend a smaller proportion of their incomes on food than other developed nations. When it comes to feeding ourselves, focusing solely on bang per buck has resulted in a nation of overweight individuals lacking discerning tastebuds.

I try my best to stop eating when I feel full rather than when I’ve cleaned my plate. My cross country captain in college always said, “Listen to your body.”

I find that food tastes so much better when it’s not scarfed down. Meal times are probably the most relaxing parts of my day, so I try to make ’em last a good long while.

I cook often, but my garden is non-existant. I hope to start planting herbs in the near future. I can’t wait to make mixed herb pesto on a regular basis.

3 thoughts on “In Defense of Food – Michael Pollan”