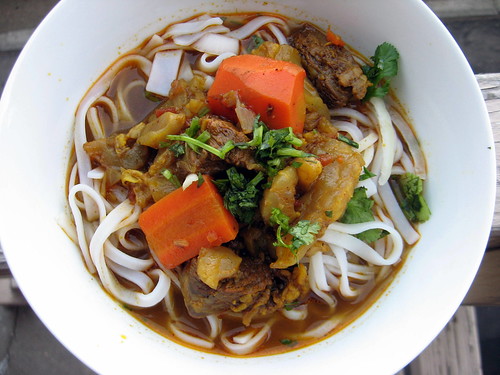 If Vietnamese noodle soups were a high school popularity contest, Pho would be crowned Homecoming King, while Bun Bo Hue would be voted Most Likely to Succeed. Bò Kho, on the other hand, would probably be chilling on the grassy knoll with the stoners; high and oblivious to the hype. Even though Bò Kho has yet to take the culinary world by storm, it is still my all-time favorite noodle soup. Bò Kho is hearty, a bit spicy, a lot savory, and absolutely delicious.

I finally tried my hand at making Bò Kho with my grandma last weekend. As is the case with most of my family’s recipes, everything is prepared “by feel” and “to taste.” Since I know this dish like the back of my hand, these seemingly abstract spicing and seasoning methods are crystal clear. However, for those unfamiliar with this particular noodle soup, I’d highly recommend getting a feel for the flavor profile at a local Vietnamese restaurant or, even better, at your Vietnamese friend’s grandma’s house before preparing it at home. Grandma and I started our day of cooking at the Vietnamese grocery store. We picked up two beefy parts: tendon and shank. The quantities specified above will make a huge pot of Bò Kho with 10 to 12 servings. If you’re not cooking for a crowd or don’t appreciate ample leftovers, scale down the amount of meat. Cut the shank lengthwise along the grain into 1 ½ -inch chunks and set aside. The tendon and shank cartilage are extremely tough cuts of meat and thus require a lengthy boiling period in order to tenderize. Boil the tendon and shank cartilage on medium-high heat for 2-3 hours in a medium-sized saucepan. Skim off the scum that forms on the surface with a wire skimmer. As the water evaporates, add in enough water to cover the entire surface of the tendon. Once the tendon and shank cartilage is suitably tender, remove from water, chop into bite-sized chunks, and add to soup. While the tendon is boiling away, mince the garlic and shallots, finely chop the onion, and peel and cut the carrots into 1-inch chunks. If there are any large chunks of tomatoes, make sure that they are finely chopped as well. Cook the onions, garlic, shallots, and bruised lemongrass stalks in a tablespoon of vegetable oil on medium heat until soft and fragrant. Next, add in 3 heaping tablespoons of Bò Kho seasoning along with the beef. Saute until the meat begins to brown on all sides, approximately 7 minutes. Season the mixture with 1 teaspoon sugar and 2 heaping teaspoons salt, and add the crushed tomatoes along with enough water to cover the surface of the mixture. Let simmer on medium-low heat for 30 minutes in order for the meat to absorb the plethora of seasonings. After the simmering period, add the carrots and enough water to dilute the spices—approximately four times more liquid than the amount already in the pot. Season with several shots of fish sauce, a light sprinkling of MSG, and additional salt and sugar to taste. Cook the soup on medium heat until the beef and tendons are tender and the flavors have married, approximately 2-3 hours.

Right before serving, do a final taste test. Add salt or fish sauce to intensify the overall flavor, or add a bit of water to dilute the broth. 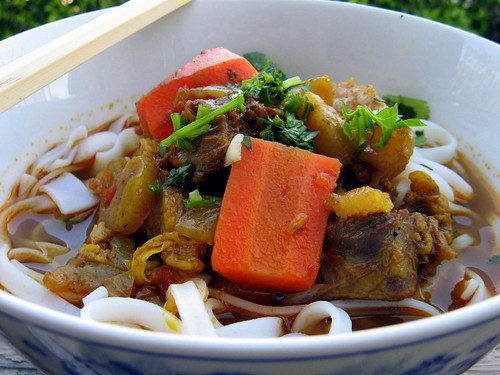