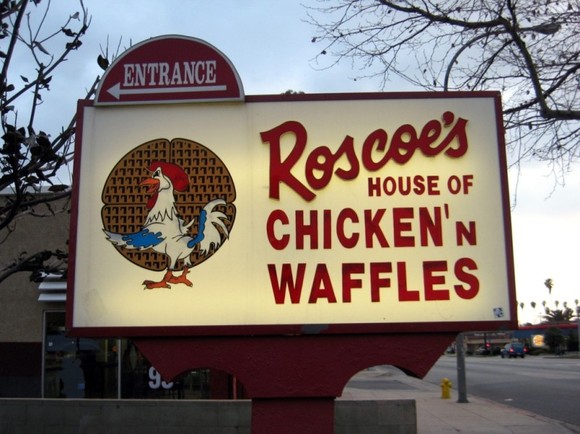 Remember the show House of Style on MTV? It was hosted by Cindy Crawford in the late 80s. The weekly occurring, hour-long program explored the world of celebrity, modeling, and style before the ultra-intrusive paparazzi era. Even though it’s been a good fifteen years since I’ve actually seen an episode, some segments have stuck in my mind all these years, like the do-it-yourself projects with Todd Oldham and the episode where Dennis Rodman tried on Speedos for Cindy—talk about a plantain hammock.

There wasn’t really much food talk on House of Style because models and food go together like oil and water. The one exception was when the incredibly-stylish Lenny Kravitz took Cindy on a tour of his favorite Los Angeles haunts, including a stop at Roscoe’s House of Chicken and Waffles.

Taking a cue from Lenny, The Astronomer and I took our Hawaiian visitor Luscious Liana here for her final dinner in the City of Angels. 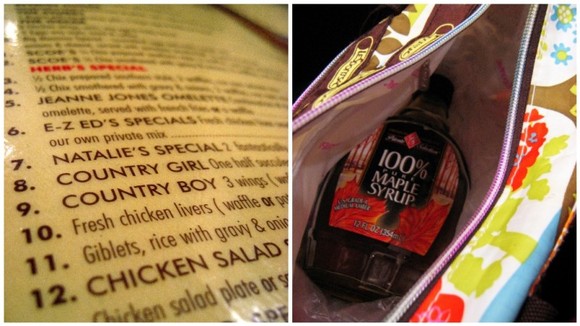 Roscoe’s menu goes above and beyond the well-known chicken and waffles. Soul food staples like grits, biscuits, chicken livers, giblets, and collard greens are also on the bill of fare. For our inaugural visit, we stuck to the house specials. Afraid that Roscoe’s only dished out high-fructose corn syrup instead of 100% maple syrup, I brought along a bottle of the real deal in my purse. I don’t like to leave my fate in the hands of strangers. 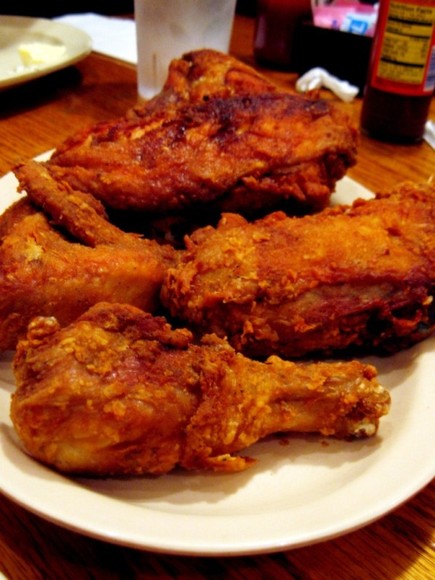 The Astronomer and I shared half a chicken prepared Southern-style with two waffles ($15.30). As anticipated, the chicken was killer. The skin was crispy and well-seasoned, while the meat was splendidly moist. I selfishly hogged up the dark meat and left the poor Astronomer with the hefty breast. It was a lot of food for two people, but chicken and waffles don’t taste nearly as good the next day, so we rallied like champions. 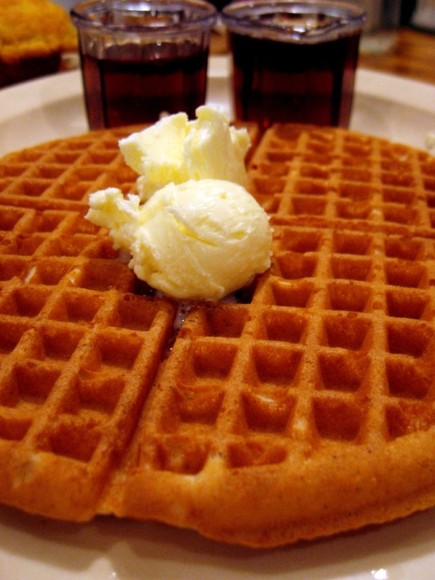 The waffle portion of our meal was served on separate plates with two shots of Aunt Jemima and two blobs of butter for each of us. The waffle was decent, but not as crisp as we would’ve liked. Even though the waffle wasn’t perfect, The Astronomer still happily dug in because he hasn’t seen this style of waffle since he left Waffle House Territory.

Everyone at the table agreed that chicken and waffles tasted best when eaten together. Take a square of waffle plus a hunk of chicken, add to it a piece of crispy skin, a shmear of butter, and a dousing of syrup, and you’ve got a handsome sweet and savory delight. 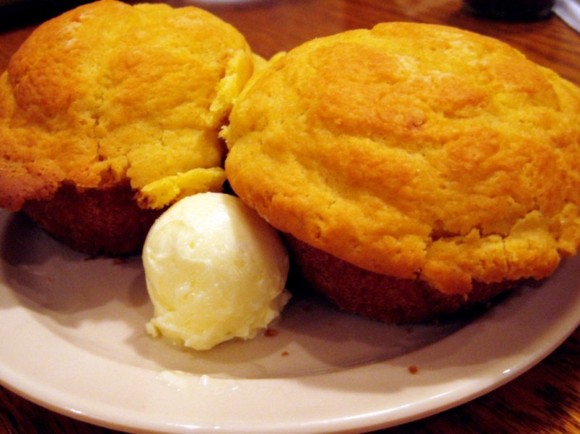 In addition to the chicken and waffles, The Astronomer and I also shared a side of cornbread ($2.40). Unlike traditional Southern cornbread, these muffins were done sweet, Yankee-style. The cornbread was good, but not good enough to order on our next visit to Roscoe’s.

Bonus: Click below to see how Luscious Liana likes to eat her chicken and waffles. Warning—it’s a heart attack on a plate. 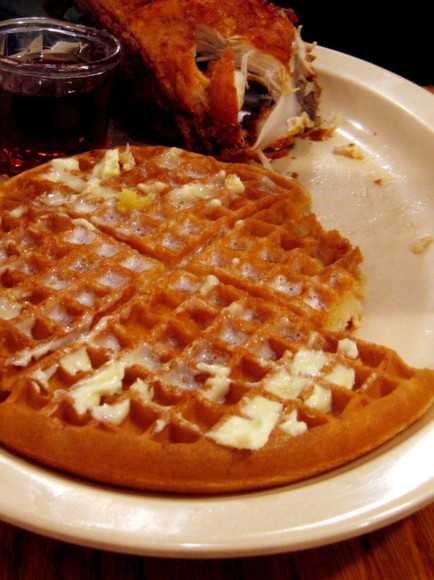 Lush says that butter is one of her favorite foods.

8 thoughts on “Roscoe's House of Chicken and Waffles – Pasadena”