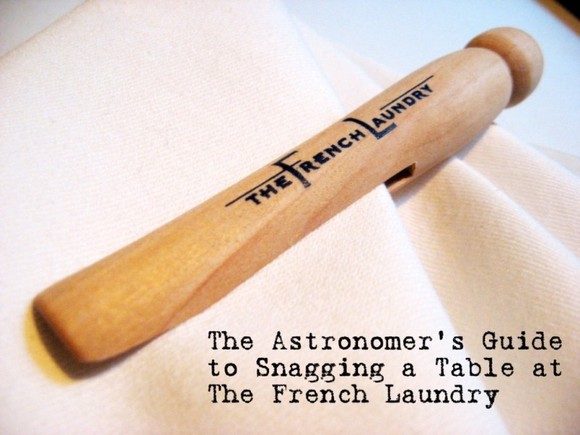 First off, thanks to everyone for all of your congratulations and kind words in response to The French Laundry post. Since a few people have asked, I thought I’d share some tips on securing one of the famously elusive reservations. This isn’t really groundbreaking stuff—all the info is available elsewhere on the internet—nevertheless, here goes.

Basically, getting a reservation at The French Laundry comes down to pure determination. They claim there is no special treatment, although I’m sure if you’re someone really important, things would be different. In any case, it is possible for an average person acting alone to get in, but if you are hoping for a weekend dinner, it’s going to take some persistent effort. There are two ways to make a French Laundry reservation; by going to French Laundry on Open Table or by calling on the phone.

There are three tables for each dinner service available through Open Table, only one of which is for a party of two. All of these tables become available at exactly midnight pacific time, 61 days in advance. Unlike the phone lines, which sometimes seem to be switched on at 10:01 or 10:02 instead of exactly at ten, the Open Table system is completely automated. Using a trusty internet clock, click ‘Find a Table’ at exactly 12:00:00.

If you don’t mind eating at an odd hour (5:30 or 9:30), Open Table may be the best option, particularly if you have a party of four.  In my case, the timing didn’t work—it was easy to pop out of class every day at ten and try calling the phone reservation line over and over for a few minutes, but executing the perfectly timed internet reservation at midnight without The Gastronomer figuring out what I was doing proved to be too difficult.

If you find a desirable reservation on Open Table, it’s not yours until you finish the check-out process, so act fast. You’ll want to open an Open Table account and sign in beforehand. The French Laundry also requires a credit card to secure a reservation, so have that ready as well.

Finally, if you’re fortunate enough to live in northern California or have extremely flexible travel plans, canceled reservations are often made available on Open Table. You can find these by searching for a reservation for a nearby date; when you get the ‘There are no reservations currently available for the day you selected’ message, click on ‘Find next available day.’ There’s a good chance you’ll find at least one table available, probably on a weeknight, within the next thirty days (which is as far in advance as Open Table will look using this option).

If at First You Don’t Succeed, Redial

Phone reservations are taken two months to the calendar day (i.e. call on April 25 to eat on June 25; some months this turns out to be the same timeline as Open Table’s, sometimes it’s different).  If you call before 10:00 PST , you’ll get a recorded message telling you the reservation lines are closed. If you call back after ten, you’ll get a busy signal.  Almost always.  But keep trying.

As it happened, I first called the phone reservation line on January 21, the day The French Laundry reopened after their winter break. The Gastronomer was out of town at the time—so I had the apartment to myself. I started calling at about 9:55 and got the recording. At 9:58 or so I got my first busy signal. 100+ redials later, it was 10:30, and I still hadn’t gotten through. Not surprisingly, the call volume is exceptionally high on reopening day. I took a break and tried again at intervals throughout the rest of the day, but didn’t get through until around 1 PM the next day. Dinner reservations for Sunday, March 22 were all taken, but I was just in time to grab the last lunch reservation. Unfortunately, it was at 11 AM, a ridiculous hour for a $240 meal, but I took it.

The next week, I tried calling again for a Friday dinner reservation. I called a few minutes before ten and got the recording, then a succession of busy signals, and then, at about 10:03, I got the recording again. Frustrated by The French Laundry’s lack of punctuality, I hung up and redialed. At around 10:15, I finally scored. Instead of a busy signal, a voice came on the line, telling me to hold and wait for a reservationist. It slowly dawned on me that this was the same voice I had heard at 10:03—the second recording had actually been different from the first, and if I had just stayed on the line, I would have gotten through twelve minutes earlier. Still, I waited in eager anticipation, but when it was my turn to speak to someone, all the dinner reservations were gone. My heart sank—I had gotten lucky and blown it. It was looking like my proposal might have to be accompanied by a reservation for an early Sunday lunch. Still a nice surprise, but not quite what I had imagined.

The next day I awoke invigorated and determined to try again. By now I was getting the hang of the routine. There was no point in calling at 9:55—I waited until 9:59. At 10:05, magic! I held my breath while I held for the next available operator. If you’ve never tried to get a French Laundry reservation, I’ve got to say, it’s quite an emotional ride. Calling over and over and over and getting busy signals gets tedious, but when you finally get through—what an adrenaline rush! Nearly all of the tables for two for Saturday, March 28 were taken, but I managed to snag one for 5:45. It was the hardest thing not to tell The Gastronomer right then and there. Seven days and 500+ phone calls after I first started calling Yountville, I was set.