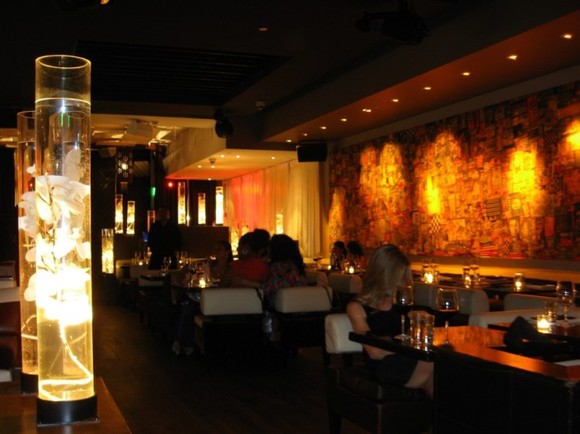 Less than a week after the huge blogger blowout dinner at STK, the One Group invited us all back for more. The site of the encore dinner was at One Sunset, the group’s flagship restaurant. Part lounge and part restaurant, One Sunset offers the trendy Hollywood crowd the best of both worlds in one sultry setting—hence its name.

Once again, the city’s food bloggers showed up with bells on. [A full list of attendees after the jump.] Our group of camera-wielding and notebook-jotting diners came specifically to sample One Sunset’s Tuesday night dinner special. Designed by Chef Jason Ryczek, the “One of Almost Everything” tasting menu offers diners a four-course menu featuring ten of the restaurant’s signature dishes, including dessert, for $45 a person. A full bottle of wine can be had for a dollar more. 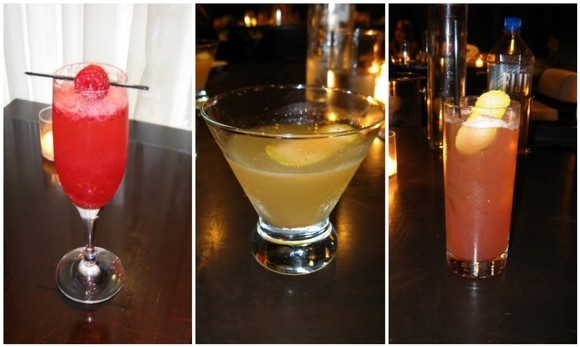 After getting thoroughly smashed at STK, I displayed incredible restraint this evening in order to focus on the food. Mixologist Pablo Moix’s potent cocktails made several appearances throughout our dinner.

The Astronomer and I were greeted with flutes of LUSHious Raspberry (left – muddled raspberries, Gloria Ferrer Champagne) upon entering the restaurant. The ruby red drink was bubbly and refreshing.

Lastly, the Tropical Sidecar (right – Hennessy, pineapple, Cointreau, blueberries) arrived with the heartier courses. I found it reeking of booze and not much else. Pass. 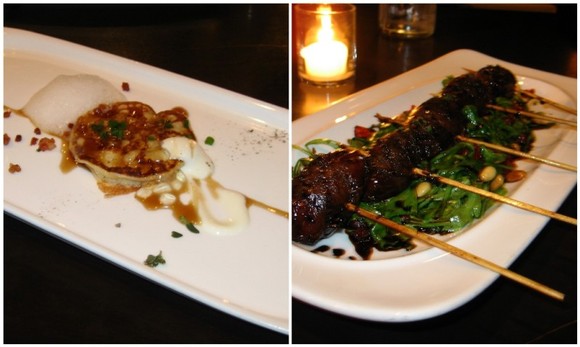 Chef Ryczek started our group off with an off-the-menu creation called Breakfast on a Plate (left), which consisted of pancakes, bacon foam, apple caviar, maple syrup, and crème fraîche. From the presentation to the flavors, everything about this starter was right on point. The only flaw was its temperature. I’m not sure whether the chef intended to send the dish out lukewarm, but I would have preferred my breakfast served hot.

Next, we noshed on some Adult Candy (right)—bacon-wrapped, blue cheese-stuffed dates. The dish’s combination of savory, salty, and sweet notes were easy to like, but creativity was sorely lacking. Bacon-wrapped dates are strictly dinner party 101 fare. 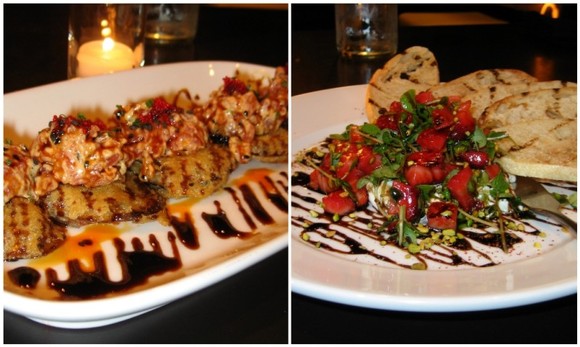 The Spicy Tuna Tartare (left) was served upon eggplant tempura and drizzled with kecap manis, a sweet soy sauce. The tuna’s thick spicy sauce was heavy with chilies, thus overwhelming the delicate fish.

The best starter of the evening was the burrata with Carlsbad strawberries, pistachios, pink pepper, and basil (right), which was served alongside delightfully sweet and crisp cinnamon toasts. The dish’s unique combination of flavors had The Astronomer and I jonesing for more. We heart creativity. 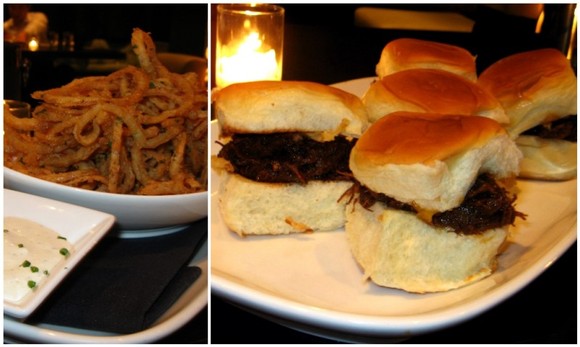 The BBQ Sliders with crispy shallots and smoked cheddar that arrived next were at a Maroon 5 level of rocking. Had the bread not been cold and plain white, the sliders would’ve tasted much better; perhaps reaching The Fray rocking status. The fried onion strings served alongside the sliders were golden and plentiful, but I’m more of an onion ring kind of girl. 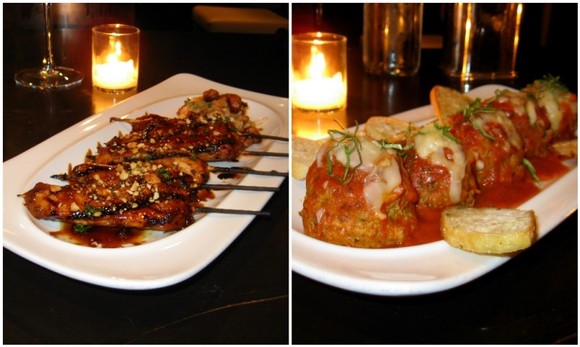 The Korean Chicken Satay (left) was smothered in a sauce with hints of kimchi and kecap manis, and sprinkled with crushed cashews. Considering how little I appreciate chicken breast, this dish had a certain sweet and spicy appeal.

The Turkey Meatballs (right) with marinara, Parmesan, and basil were surprisingly moist and had a homey quality. Turkey meatballs strike me as diet food, which probably bodes well for One Sunset’s usual clientèle. 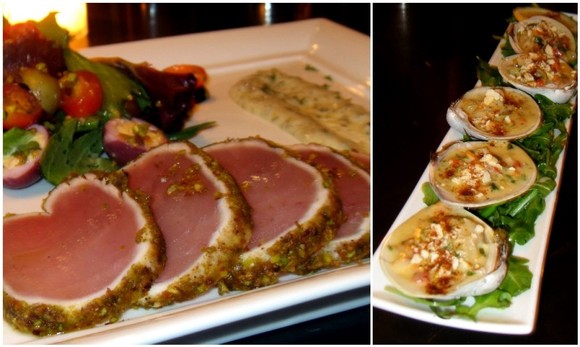 Even though crusted and seared tuna is a tired menu offering, One Sunset’s pistachio crusted albacore was done well enough (left). The fish was served alongside a caper aioli and a Niçoise salad.

The roasted clams on the half-shell with chorizo, chowder sauce, and crushed oyster crackers (right) were my favorite hot course of the evening—there’s nothing quite like taking a shot of shellfish. 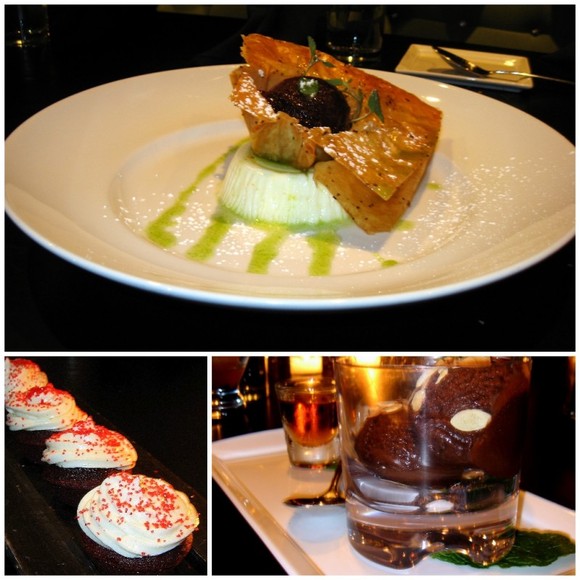 We wrapped up the evening with a trio of desserts. The Meyer lemon panna cotta (top) with blackberry sorbet, lavender poppy seed crisp, and lavender oil was a hit among my tablemates. For me, the floral profile was too much and as a result, the entire dessert tasted like Lysol.

The Vegan Godiva Chocolate Gelato (bottom, right) was served with a shot of Amaretti di Saronno. There’s something about the sharpness of the word “vegan” that’s a real appetite killer, especially when it comes to desserts. I vote for replacing the shot of booze with some real dairy goodness.

The Velvet Rope Cupcakes (bottom, left) were terrific. The cake was moist and the frosting tasted great—clearly evidence that good desserts will result from proper usage of butter and sugar.

Thank you again to Abby and the One Group for coordinating this very special dinner.