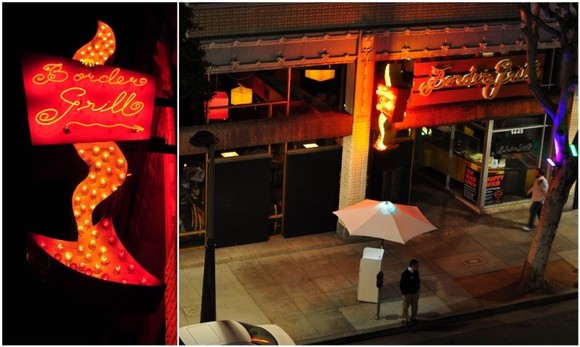 In a city where food bloggers are spoiled with meals out on the town nearly every night of the week, it’s rare that I attend an event so seriously kick ass that I wake up the following day with a goofy grin permanently planted across my face. The morning after, or more accurately the afternoon after, attending last week’s margarita dinner at Border Grill in Santa Monica, I was smiling from ear to ear. I had so much fun.

Border Grill, chefs Mary Sue Milliken and Susan Feniger‘s upscale, modern Mexican food restaurant, hosts margarita dinners several times a year. The event I attended was a four-course affair featuring five different margaritas made with Tequila Corralejo. The cost was $45 per person, or $38 for Border Grill Locals Club members. The Astronomer and I attended the dinner as guests of the restaurant. Lucky, lucky us. 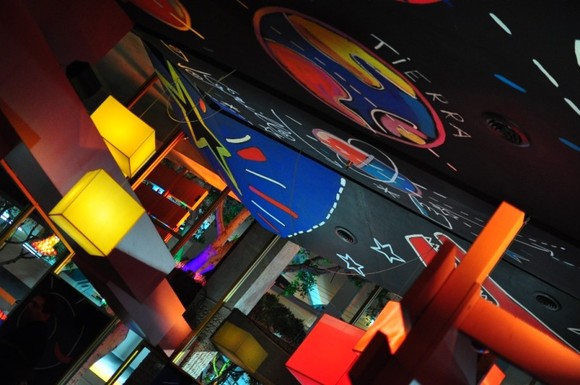 The vibe at Border Grill is colorful in every sense of the word. Every inch of space from floor to ceiling is painted in vibrant and bold hues. As someone who lists “bright colors” as an interest on her Facebook profile, you bet your boots I was digging the “urban cantina” atmosphere. 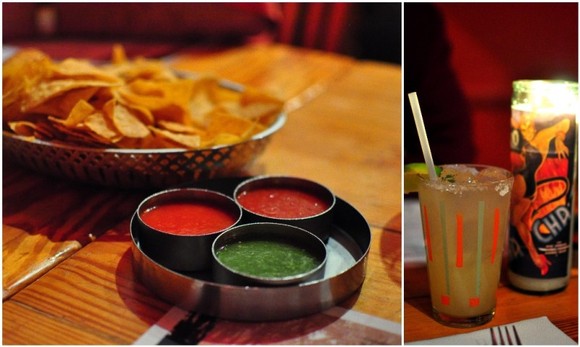 The Astronomer and I were seated at a large communal table, one of five set up in the main dining room for the event. To my left were two fun kids on their seventh date, and to my right were a group of three Border Grill regulars, or rather Mary Sue and Susan regulars. They’ve been fans of the Two Hot Tamales since their City Cafe days. With tequila flowing freely, we were all BFFs by the end of the night.

First up in the drinks department was a classic margarita served in a salt-rimmed glass. The drink went down fast and smooth. 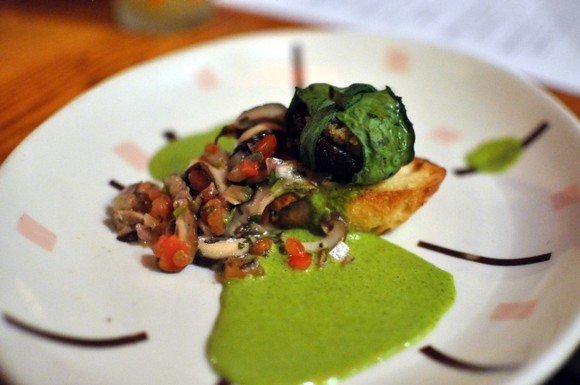 The menu for the evening was designed by Executive Sous Chef Raymond Alvarez. After traveling with him and Border Grill manager Doug Rausenberger through Baja this past summer, it was great to finally sit down and experience their food.

The meal kicked off with an hoja santa-wrapped shiitake perched atop grilled bread with mushroom ceviche, caramelized leeks, Oaxacan string cheese, and salsa verde. The tart and earthy ceviche paired excellently with the hearty bread. I inhaled both my portion and The Astronomer’s because my boy don’t do ‘shrooms. The stuffed and wrapped shitake was my favorite component. 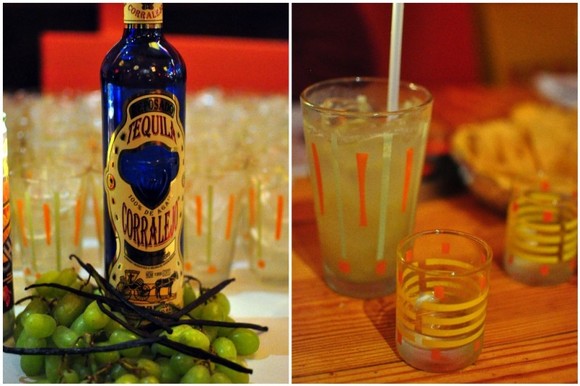 A grape-nilla margarita made with vanilla bean infused Corralejo Reposado and green grapes was served with the first course. Like a fine wine, the Reposado was aged for four months on three different kinds of oak—French, American, and Mexican. A pour of Reposado was served alongside the margarita for tequila connoisseurs to swish and taste, and for pirates like me to take a shot. 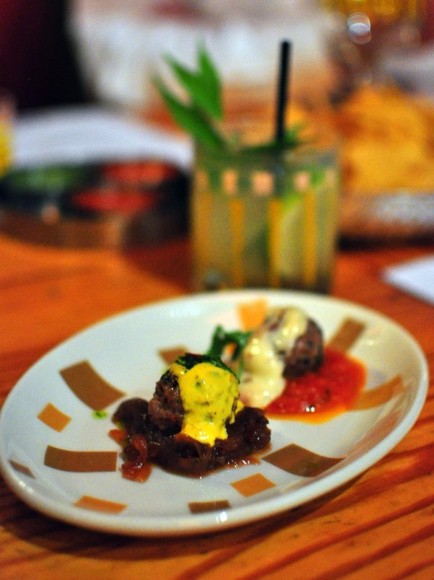 The next course was Albondigas Dos Caminos, or “meatballs two-ways” for those who don’t hablar Español. The Kobe beef meatball was served with a spicy salsa brava and roasted shallot aioli, while the lamb meatball was topped with curried yogurt, caramelized onion marmalade, and oregano chimichurri. It was hard to play favorites with this course, both meatballs were thoughtfully composed and delicious. 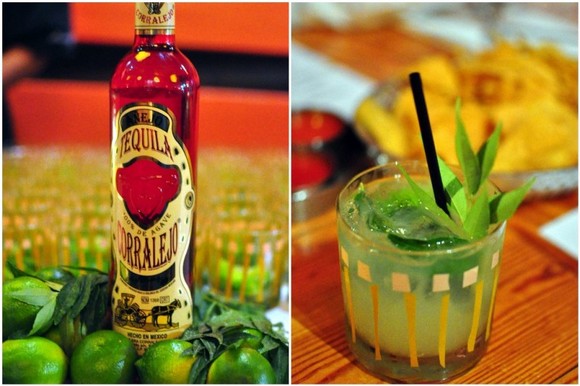 The meatballs were paired with a curried margarita made of Corralejo Anejo, muddled curry neem leaf, and fresh lime. The Anejo was aged for twelve months in charred American oak barrels, which lent a touch of smoke to the flavors. I loved the use of fresh curry leaves in this cocktail. 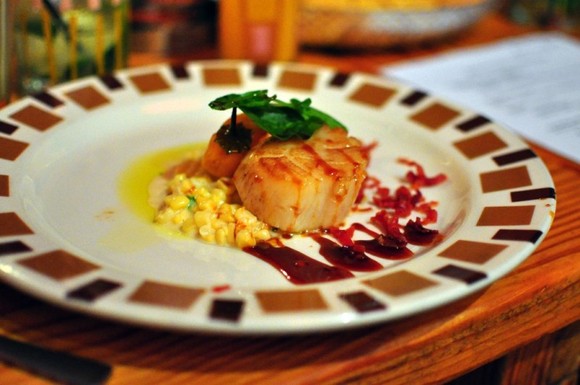 The final savory course was a pleasantly plump sea scallop with olive oil poached pepper, creamed corn, crispy serrano ham, and blood orange reduction. The seriously large scallop was expertly seared; its sweet and buttery-texture worked well with the equally sweet and buttery corn. The ham and citrus balanced out both sweet and buttery fronts. 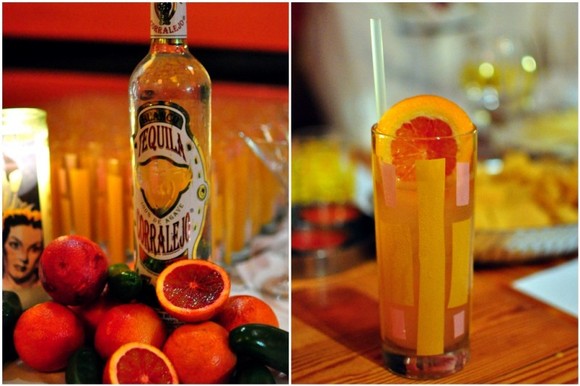 The scallops arrived with a tall glass of blood orange margarita made with Corralejo Blanco, Cointreau, and blood oranges. Unlike Corralejo’s other tequilas, this one wasn’t aged and therefore tasted of pure blue agave goodness. 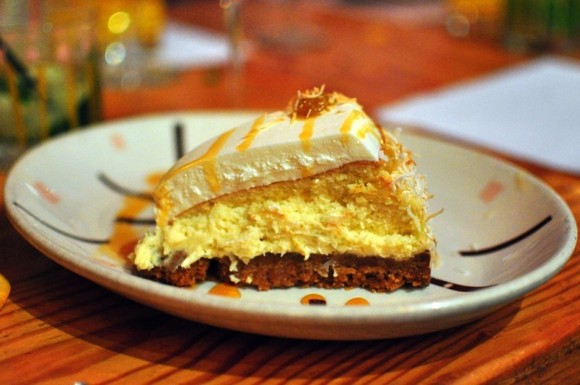 To close out the evening, we were served a coconut tequila cheesecake with Corralejo Triple-Distilled Reposado soaked golden raisins, toasted coconut, and caramel sauce. Massive, creamy, and decadent were three words that came to mind. 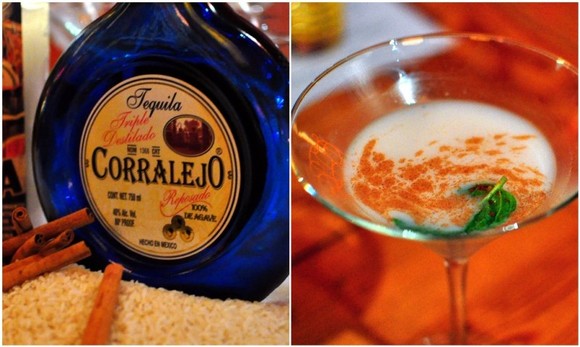 The final cocktail pairing of the night was a Corralejo horchata made of Corralejo Triple-Distilled Reposado, rice, milk, cinnamon, and vanilla. The world would be a friendlier place if adult horchata were available at every taco shop and truck.

After downing five cocktails and four courses, The Astronomer and I bid farewell to our new friends and vowed to return to Border Grill for the next margarita dinner. Next time around, we’re either booking a room in Santa Monica or setting up camp on the beach so that we can both drink like pirates.