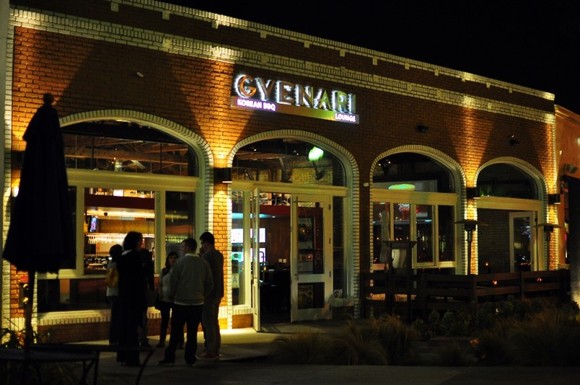 Without cable in my home, I was sadly unable to catch the latest season of The Next Food Network Star. But thanks to the hilarious re-caps featured on B-Side’s blog, I didn’t miss a beat. From the get go, I had my money on Ms. Debbie Lee because her culinary approach—“Seoul 2 Soul“—was insanely catchy, and because I can’t help but route for Asian-American females. Even though Ms. Lee didn’t end up taking home the grand prize, she did score a sweet gig revamping the menu at Culver City’s Gyenari, where her cousin William Shin is the owner.

Mr. Shin and general manager Jimmy Jang invited a group of food bloggers to preview Gyenari’s Korean and Seoulful menus last week. After years of drooling while watching food programming on the couch, I finally had the opportunity to taste what I saw on TV. Woo hoo. 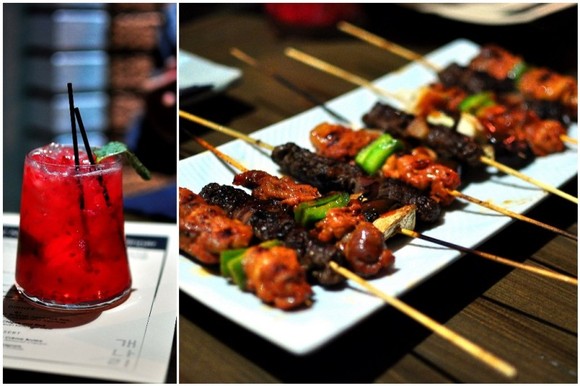 Our dinner started off with cocktails and small bites on Gyenari’s patio. We sipped Soju Caipirihnas ($10) made with fresh limes, raspberries, and muddled lychee while nibbling on grilled spicy pork, beef, and vegetable skewers. Nothing gets the party started like well-crafted cocktails and meats on a stick. 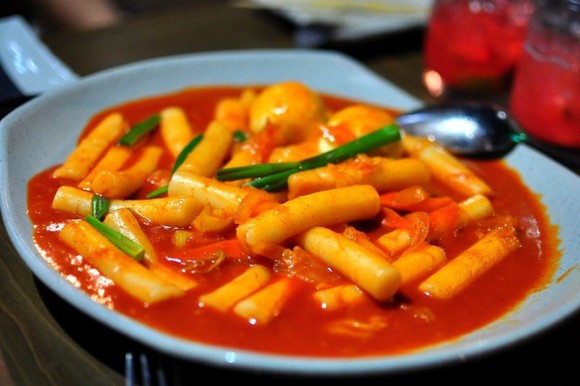 Next, we were served a plate of my current Korean obsession—dukboki. I was introduced to these chewy rice cylinders at Cham Korean Bistro in Pasadena and since then, I’ve ordered dukboki at every opportunity. Gyenari’s version was pleasantly spicy and not too sweet. 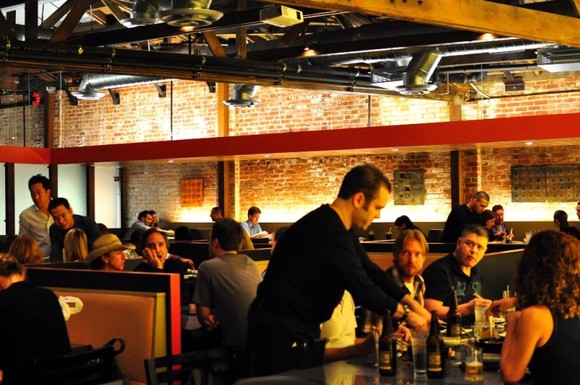 For the next part of our meal, we made our way into Gyenari’s main dining room. With its red brick walls and tastefully exposed ceilings, the space felt like a hip downtown loft. 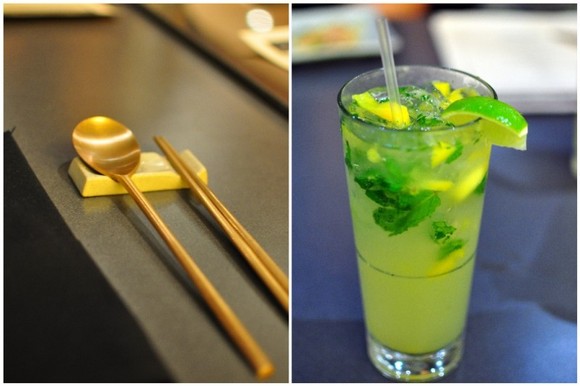 As we took our seats, everyone ordered a second round of cocktails. I chose a mango mojito ($10) made with Cruzan Estates white rum, fresh mango, mint, and lime juice. The drink was so strong that I mixed it with Evelina’s (Two Hungry Pandas) overly sweet mojito to create the perfect blend. 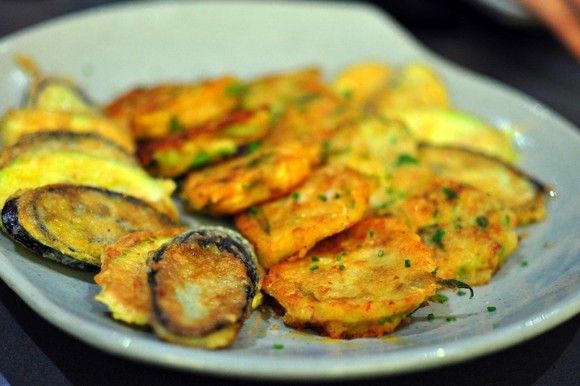 Even though we were already served two appetizers on the patio, Gyenari’s generous hosts brought out three more for us to sample. First up, an assortment of jeon ($8)—battered and fried slices of zucchini and eggplant and patties of mung bean and shrimp. The chili soy sauce that accompanied the jeon tempered its oiliness and brightened its flavors. 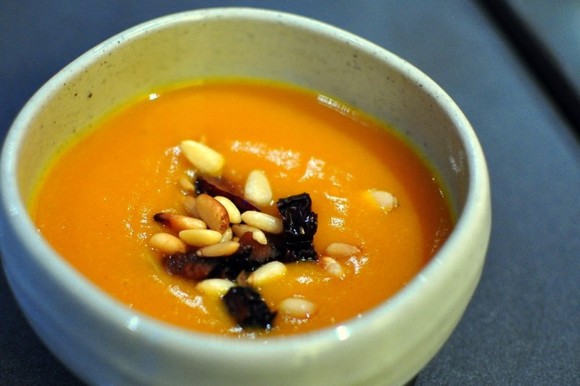 The pumpkin porridge with toasted pine nuts, soju, and sauteed dates ($8) was executed well, but I wasn’t in the mood for a virtuous soup this debaucherous evening. The porridge would have been perfect for recovering the morning after. 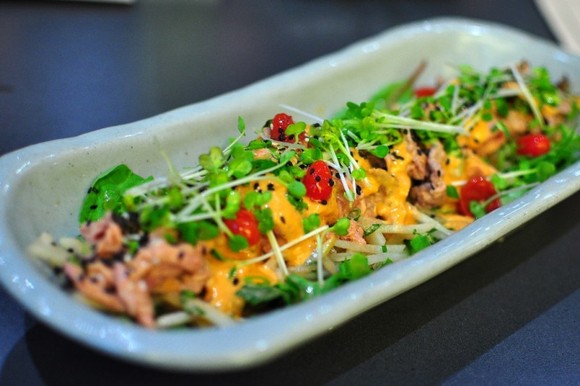 The pear and shiso salad ($10) with rib rye and shabu sesame dressing was a pretty little number and very tasty to boot. The tender slices of rare beef paired especially well with the sweet fruit. 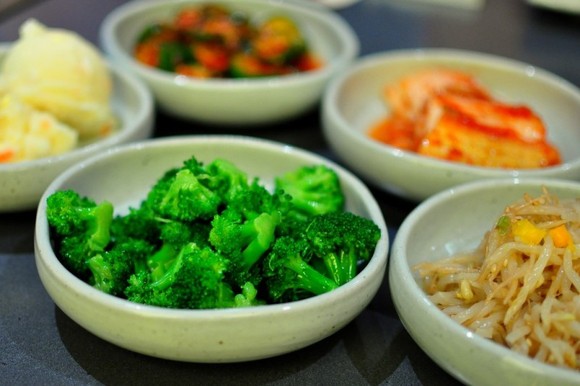 For the main part of our meal, we were treated to a classic Korean barbecue spread (G1 on the menu). Priced at $75, G1 accommodates two diners and includes banchan, japchae, and an array of raw meets to grill tableside. The selection of banchan included broccoli florets, kimchee, spicy cucumbers, and potato salad. 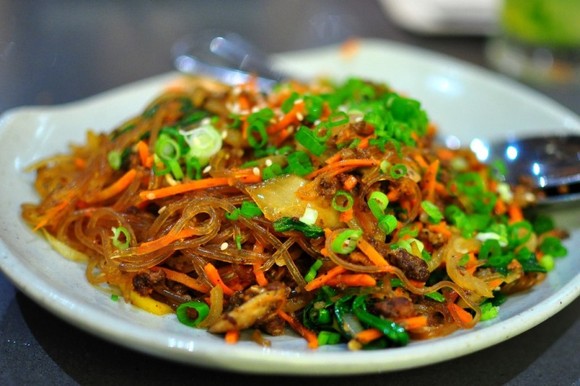 The japchae was brought to the table warm. I didn’t manage to eat much of it because my tablemates scarfed it all down while I was busy socializing—I’m looking at you D takes a B and Delicious Coma. 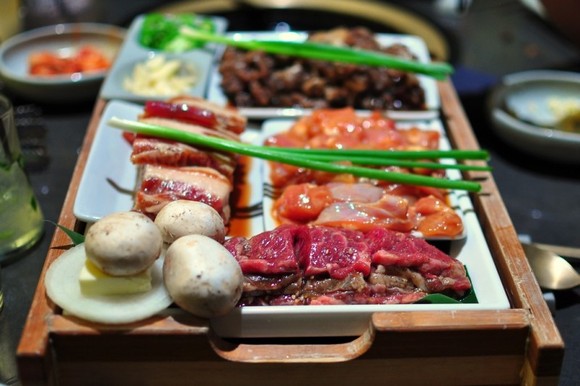 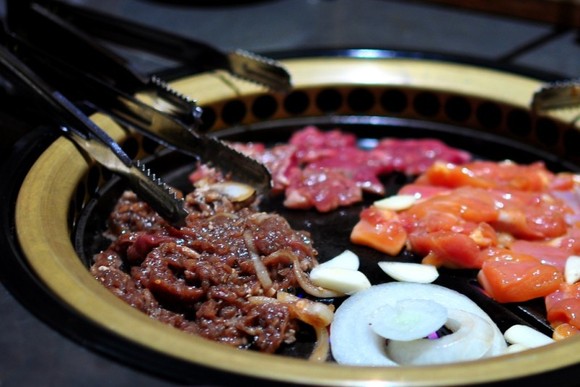 We cooked the meats on tabletop braziers while a knowledgeable waiter advised us on how to avoid poisoning ourselves. The sweetly-marinaded bulgogi was tops in my book. 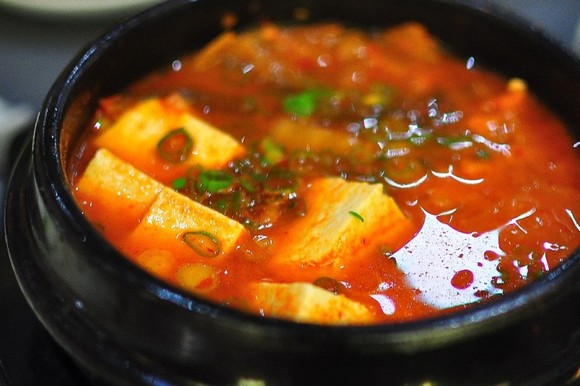 The final savory course was a kimchee chigae stew ($12). The hot broth and soft cubes of tofu were quite soothing after gorging on heaps of meat. 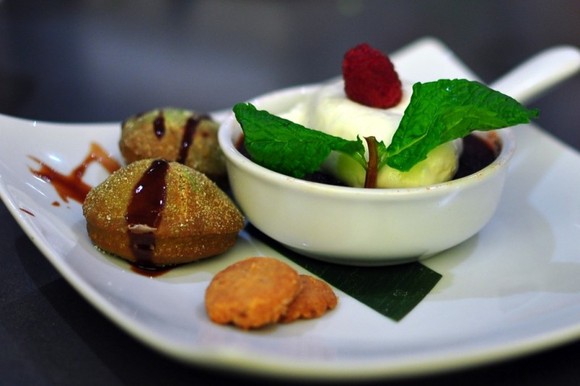 For dessert, we were served a spicy chocolate crème brulee with almond cream and bacon shortbread ($9), as well as green tea beignets with a chocolate mint drizzle ($8). I only had room for the amaretto-infused whipped cream. 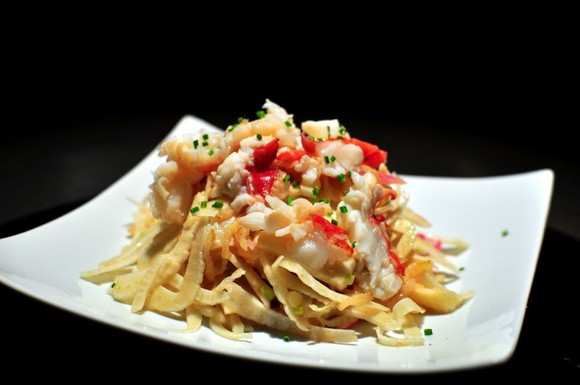 After exploring Gyenari’s traditional Korean menu at the blogger event, I returned to the restaurant a few days later to sample some of Debbie Lee’s Seoulful dishes. This time around, I had The Astronomer to keep me company. We began our dinner with a fantastic fennel and pear slaw that was dressed in a citrus soy vinaigrette and topped with poached lobster ($12). The salad was flavorful and refreshing; we were most pleased with the tender hunks of lobster. 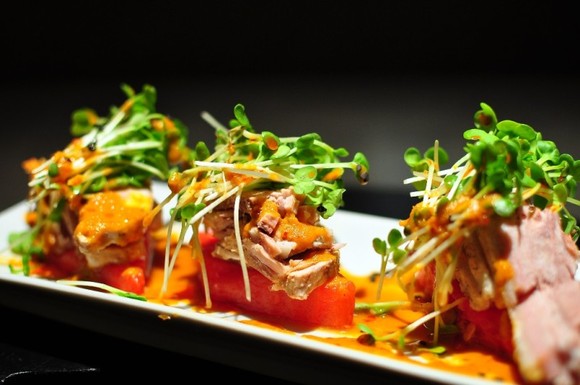 Next, we sampled a dish of pickled watermelon stacked with shaved pork belly and daikon sprouts ($9). The neat little piles were drizzled with a kimchee citrus vinaigrette. I liked everything about this dish except for the cold pork belly. When it comes to eating pure fat, I prefer it to be heated through and bordering on disintegrating. 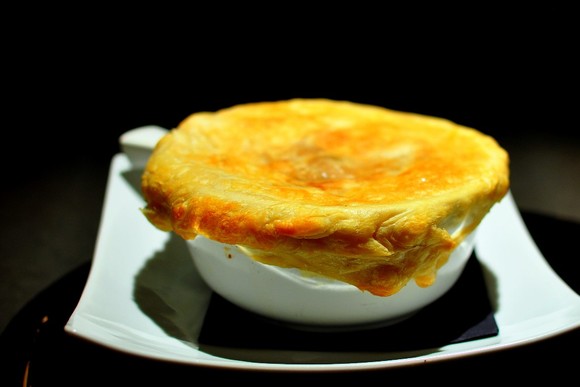 The sweetheart of the night was the galbee pot pie with pearl onions, petite peas, and chestnuts in a ginger soy gravy ($18). The buttery puff pastry and huge chunks of galbee made this dish incredibly rich and satisfying. The Astronomer couldn’t stop talking about how much tastier Korean/Southern fusion was than Korean/Mexican fusion. I couldn’t agree more. 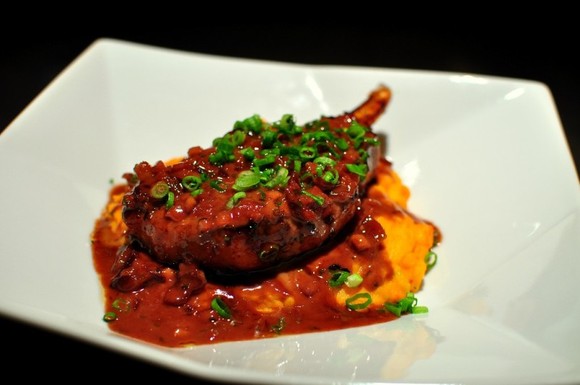 For our second entree, we ordered the pan-seared pork chop with Fuji apple pan gravy and kimchee smashed potatoes ($21). The dish was well-composed and tasted good, but the Korean flavors were too muted. We really wanted the potatoes to reek of spicy fermentation. 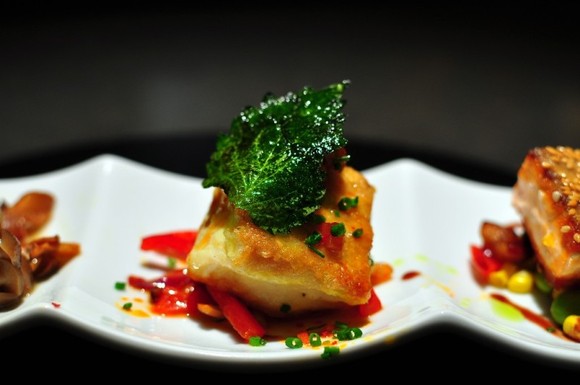 Because hospitality is his middle name, owner William Shin dropped off a sampler platter comprised of three fish dishes—sesame crusted salmon with edamame succotash ($21), pan-fried halibut ($27), and poached black cod with shimeji mushrooms and Korean miso broth ($22). The egg-battered halibut with fried shiso leaf was our favorite of the trio. 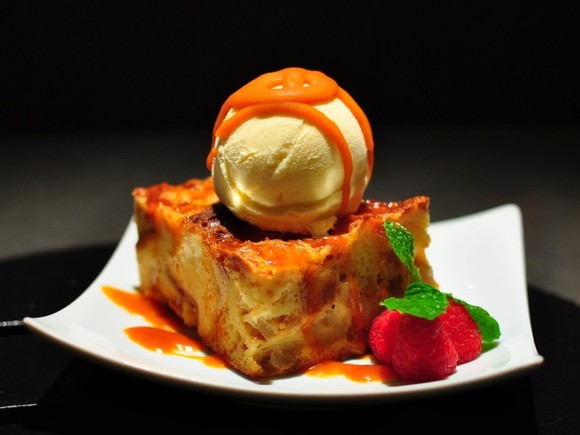 For dessert, The Astronomer went with the Asian pear bread pudding with spicy cumin butterscotch and vanilla ice cream ($8). Neither of us were particularly taken with this dessert. However, the butterscotch sauce was really something special. 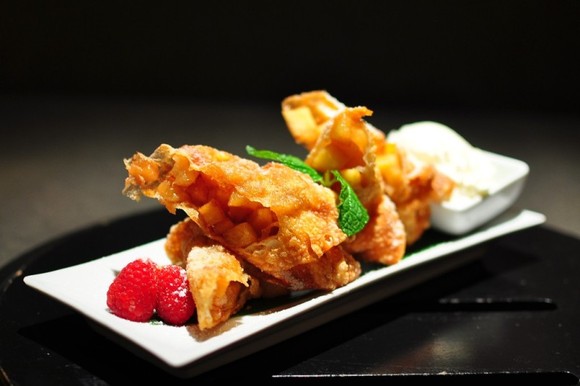 My Fuji apple egg rolls with ginger marscarpone cream ($8) tasted like a gourmet version of a McDonald’s apple pie.  This may sound like a bad thing, but I assure you, it isn’t.  Back when I used to occasionally visit McDonald’s, the two apple pies for a dollar were my go-to menu item. The best part of the Gyenari dessert was that the apples retained a bit of crispness, giving it a leg up on Mickey D’s.