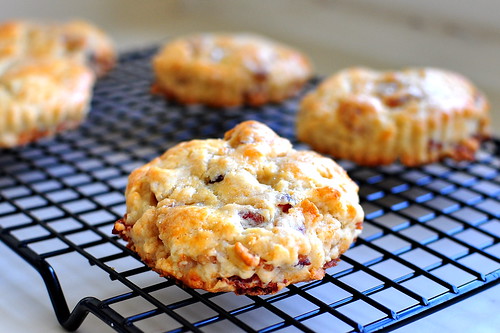 Is it just me or has bacon’s popularity gone viral over the past few years? Fat-streaked slices of cured pork have always been a morning mainstay, but these days, bacon has expanded well beyond the breakfast table. I’ve encountered bacon-kissed lip balms, bacon desserts, bacon-infused vodka, and even bacon lingerie! With the bacon bandwagon steaming along at full speed, it’s no surprise that these Maple Bacon Biscuits are one of the best-selling items at Huckleberry, a bakery and café in Santa Monica.

The Los Angeles Times developed this recipe based on Chef Zoe Nathan’s creation. I’ve never dined at Huckleberry, but was excited to prepare their famous Maple Bacon Biscuits at home. At first bite, I wasn’t sure what the fuss was all about. But after the second one, I was completely taken by the biscuit’s slightly sweet crust and tender layers of flaky dough. The texture and flavors were perfect. After I finished the first biscuit, I quickly moved onto a second one. Bacon and maple syrup are a deliciously lethal combination. 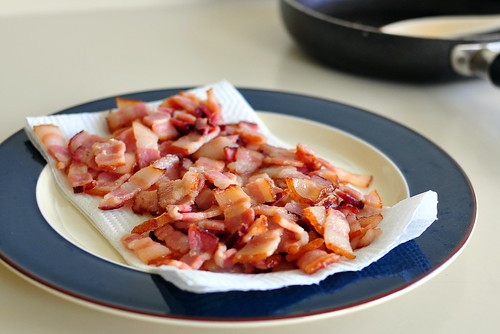 In a medium frying pan, cook the bacon over medium heat until cooked but not crispy, 10 to 12 minutes, stirring frequently. Remove the bacon to a paper towel-lined plate or pan, to remove excess fat. 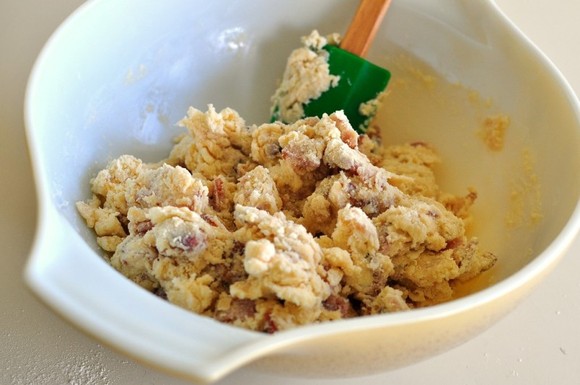 In a large bowl, whisk together the flour, sugar, baking powder, baking soda and salt.

Using a pastry cutter or fork, cut in the diced butter, until it resembles small peas. Stir in the bacon, then one-fourth cup plus 2 tablespoons of maple syrup and the buttermilk until the dough just comes together (it will still be clumpy). Be careful not to overwork the dough. 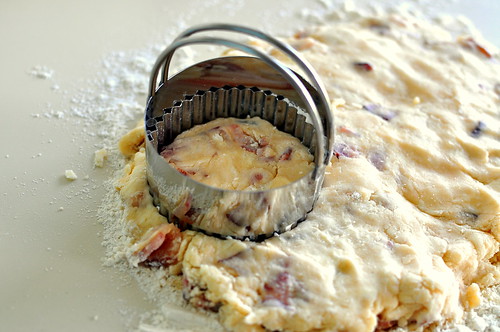 On a lightly floured surface, gently press or roll the dough to 1-inch thickness. Cut the biscuits using a 2-inch round cutter; you should have 24 biscuits. Place 12 biscuits on each of two parchment-lined baking sheets, spaced 2 inches apart. Freeze the trays just until the biscuits are chilled, about 10 minutes. 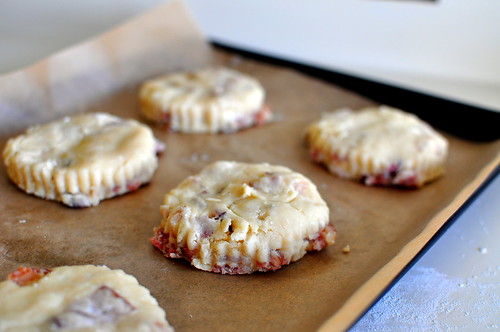 Heat the oven to 350 degrees. While the biscuits are chilling, prepare the egg wash: In a small bowl, whisk together the egg yolk, egg and cream. Brush the chilled biscuits with egg wash and top each with a pinch of fleur de sel. 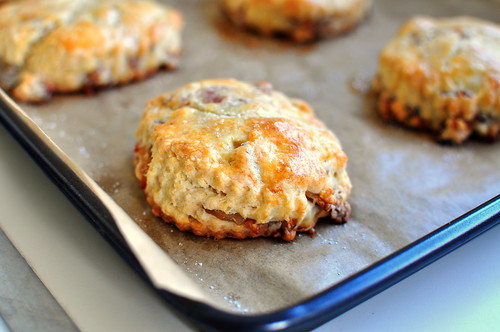 Bake the biscuits until they just begin to brown, about 25 minutes (you should easily be able to pick the biscuits up off the tray). Remove the tray from the oven. Quickly drizzle 1 teaspoon of the remaining maple syrup over each biscuit, then place the tray back in the oven for 3 minutes more. Serve while still warm.