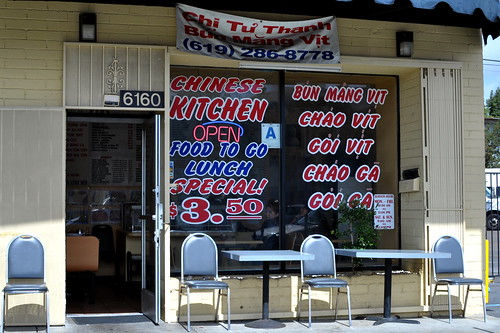 If your family is anything like mine, then you’ve probably been dining in the same handful of restaurants for several decades. For as long as I can remember, Pho Hoa has been our go-to joint for Vietnamese beef noodle soup, Minh Ky has been our standby Chinese noodle spot, Lee’s Garden has been our celebratory banquet destination, and so on. We are creatures of habit when it comes to eating outside the home.

While driving to Minh Ky for breakfast one Sunday morning, my mother casually mentioned a hole in the wall Vietnamese restaurant that she had recently noticed and had been curious to try. “They make bun mang vit,” my mom said excitedly. “It’s my favorite.”

Even though the yet-to-be-tested restaurant specialized in my mother’s favorite dish, the comfort of dining in a familiar eatery still appealed to her more. In order to encourage my mama to branch out, I had to strike a deal. If the meal at the new place was terrible, I’d volunteer to foot the bill. However, if the food turned out to be terrific, she’d take The Astronomer and me out. With nothing to lose, my mom agreed to breakfast at Chinese Kitchen/Chi Tu Thanh Nha Hang. 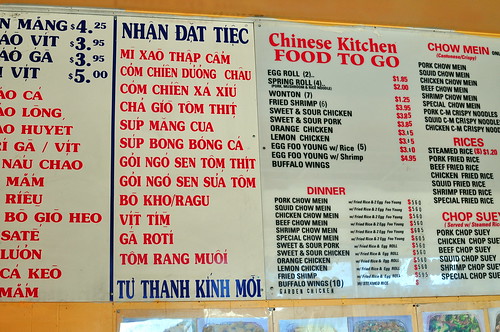 The Vietnamese-run restaurant is actually two establishments in one. Chinese Kitchen churns out classic Chinese-American fare like chop suey, chow mein, and egg foo young, while Chi Tu Thanh Nha Hang specializes in Vietnamese noodle soups and porridge. By the way, Chi Tu Thanh is the name of the restaurant’s proprietress and nha hang is the Vietnamese word for “fancy” restaurant.

Chi Tu Thanh Nha Hang also doubles up as a catering service. Throughout our meal, dozens of people came by to pick up trays of freshly fried cha gio and steaming pots of soup to bring home to eat. 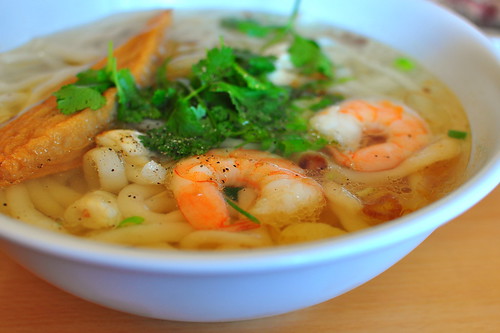 The Astronomer, my mom, and I stuck to the Vietnamese menu during our visit. I ordered a bowl of banh canh tom cua ($5), a soup comprised of udon-like noodles in a sweet pork broth with shrimp, crab, and a fish cake. I used to loathe banh canh as a child because the noodles were too slippery and gelatinous, but now that my chopstick skills have improved markedly, it’s become one of my favorite noodle soups. Chi Tu Thanh’s version was quite nice, with its clear yet porky broth and generous amount of noodles. I would’ve liked a pork trotter to gnaw on, as well as more bits of crab. 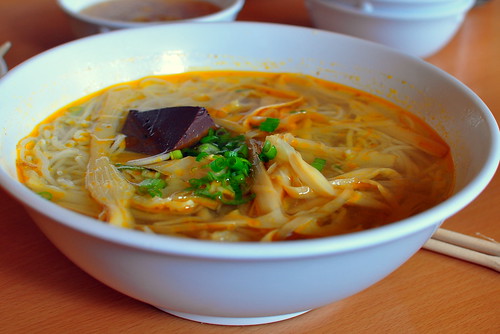 My mom was mostly pleased with her bun mang vit ($5), vermicelli noodles in a duck-based broth with bamboo shoots and congealed pig’s blood. The noodle soup’s flavors were completely satisfying, but my mother felt the kitchen was a bit skimpy with the meaty bamboo shoots. 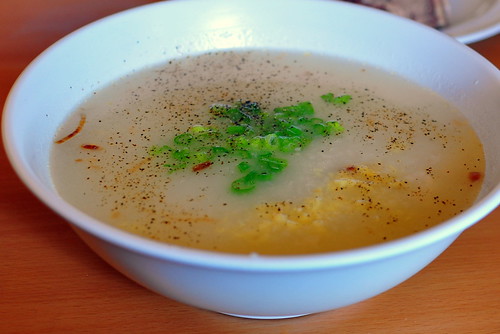 The Astronomer ordered a bowl of chao vit ($3.95), duck porridge. Topped with black pepper, scallions, and minced ginger, the porridge was seasoned deftly and comforting in a way that only porridge can be. 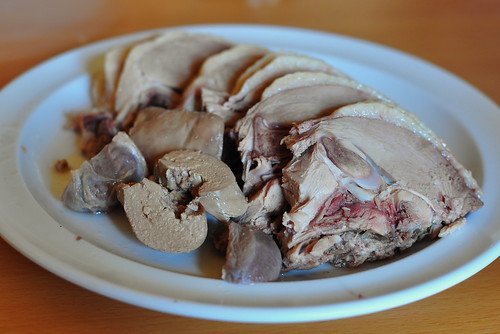 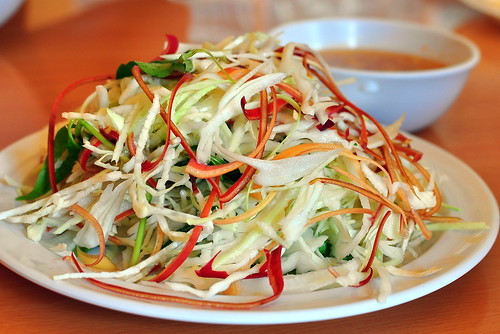 In addition to the slices of boiled duck, the goi vit ($5) included a crisp heap of lightly dressed cabbage and banana blossom.

My mom had such a positive experience at Chi Tu Thanh that she’ll be ordering a big ‘ol pot of bun mam this holiday season for us to dig into at home. Oh, how I’ve missed that wildly flavorful soup!