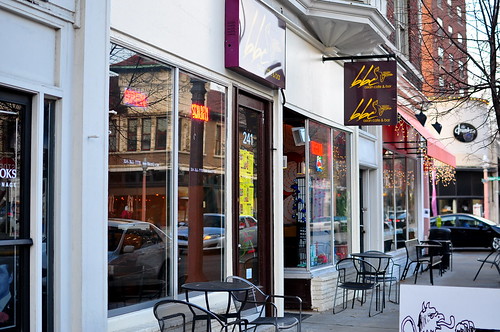 As curious as I am about Vietnamese restaurants located outside of major ethnic enclaves, I rarely visit them out of fear of being disappointed. Even though St. Louis is home to a large refugee community, I’ve avoided exploring the Vietnamese establishments in the city during my last couple of visits due to my big city leanings and Midwest prejudices. Growing up on my ba ngoai‘s fabulous home cooking and living abroad in Vietnam, I’ve developed an admittedly snotty attitude toward the cuisine. In my mind, there’s a right way to do things in the Vietnamese kitchen, and as a result, I have avoided eating in places that might compromise my notions of properness.

A mouthwatering spread on banh mi sandwiches in the January issue of Sauce Magazine, St. Louis’ monthly food-focused publication, convinced me to reconsider my policy. The vivid photos and sharp writing painted an exciting picture. As far as I could tell, the humble banh mi was taking over the city and I had to have a taste—authenticity be damned. 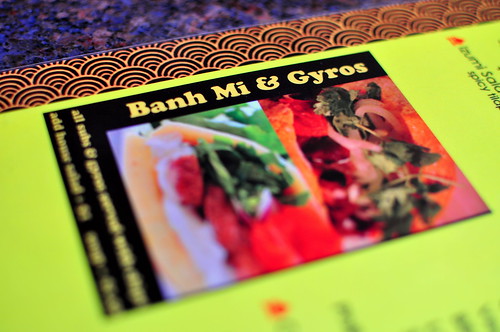 The majority of the banh mi shops featured in the article were located on or near Grand Avenue in South City. However, due to time constraints and lack of wheels, The Astronomer and I visited BBC Asian Bar and Cafe in the Central West End. The Korean-owned restaurant was formerly called BBC Banh Mi, Boba Tea & Crêperie. 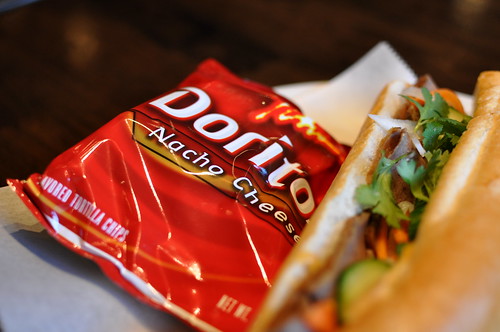 Both of our sandwiches were served with snack-sized bags of Doritos. I thought the side item was a bit strange, but somehow fitting of our environs. 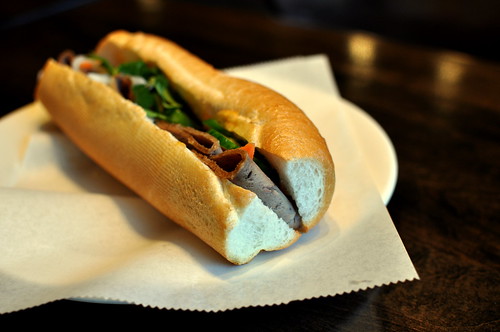 Based on Sauce‘s recommendation, we ordered the lamb banh mi ($5.50).

One of the more noteworthy local variants of the banh mi graces the menu at BBC Asian Cafe & Bar in the Central West End. There, lamb inspires wolfish gusto over an exceptionally well-balanced, if amusingly messy, sandwich.

I was initially weary of fusing Greek gyro meat with traditional banh mi fixins, but the combination turned out to be a treat of Zeus-like proportions! I was most impressed with the baguette, which was light, warm, crispy, and the ideal thickness.  Additionally, the chili infused mayo gave the sandwich an edge unlike any banh mi I have ever tasted. 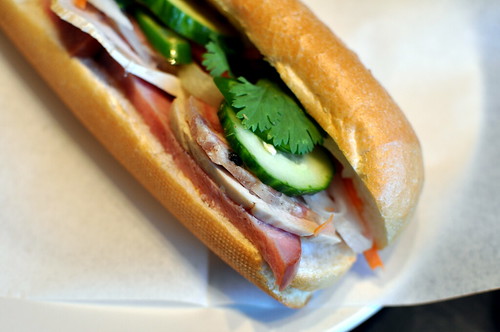 We also ordered a good ‘ol banh mi dac biet ($4.95) to see how it stacked up. The sandwich contained slices of head cheese, ham, and cha lua (pork loaf), along with the usual mayonnaise, pate, pickled vegetables, cucumbers, chilies, and cilantro. I appreciated that the pate, cha lua, and head cheese were served in all their funky glory, not watered down one bit. The sandwich’s ingredients melded together impressively, save for the deli counter ham.

After such a positive Midwestern banh mi experience, I am convinced that it’s only a matter of time before the-little-Vietnamese-sandwich-that-could goes totally global.