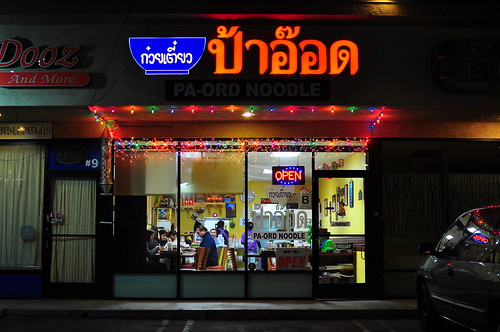 There are plenty of boat noodles to be had in Thaitown, but the return of Lawan Bhanduram, the original owner of Ord Noodle on Hollywood Boulevard, has created quite a stir. After selling her acclaimed restaurant in 2008, Ms. Bhanduram left East Hollywood for Panorama City, leaving Sapp Coffee Shop to rule the boat noodle roost. Now that Ord (Ms. Bhanduram’s Thai nickname) is back in her old stomping grounds, the title of L.A.’s best boat noodles is once again up for grabs. 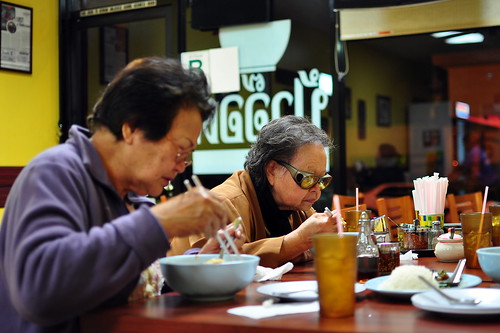 The cozy noodle shack was packed with local Thais slurping with gusto when The Astronomer and I, along with our friend Shay, arrived. We grabbed three open seats beneath the gold framed, three foot tall glamour shot of the proprietress. A plaque beneath the portrait read, “I’m not bossy, I just have better ideas.” The tastefully appointed room indicated that this place was gonna be good. Wink wink. 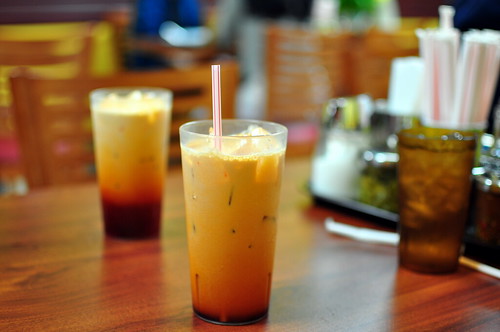 Shay and I immediately ordered two tall glasses of Thai iced tea. The drink was creamy, sweet enough, and the perfect complement to Ord’s fiery foods. 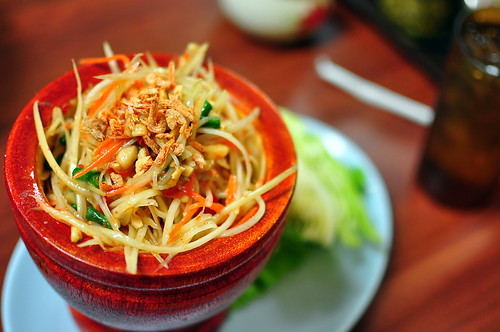 The Astronomer requested that we begin with a green papaya salad, one of his favorite foods from our Bangkok travels. Dotted with toasted peanuts and salty dried shrimps, the salad was incredibly fresh and well-balanced between the herbs and acid. The medium spice level was hot enough to impart beads of sweat on our upper lips. 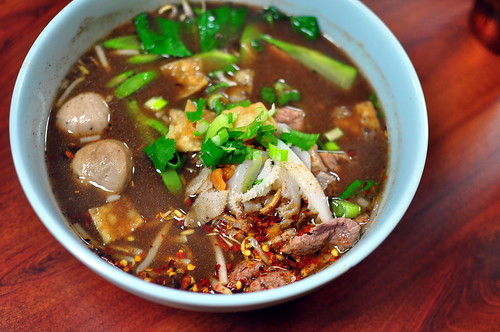 Ord’s famous boat noodles arrived next. The beef variety included thin slices of meat, squeaky meatballs, and my personal favorite, tender tripe. According to Austin Bush, an American expat residing in Thailand, kwaytiao reua or “boat noodles” are so called because they used to be sold from small boats along canals and rivers. These days, the dish is served from landlocked boats since most of Bangkok’s canals have been converted into streets.

The bowl of Ord’s boat noodles was everything I hoped it would be—intensely flavorful, slightly funky, and deeply satisfying. The dark brown broth, which contained a hefty splash of pig’s blood, was brimming with a melange of spices like cinnamon and clove. This noodle soup is the complete package. 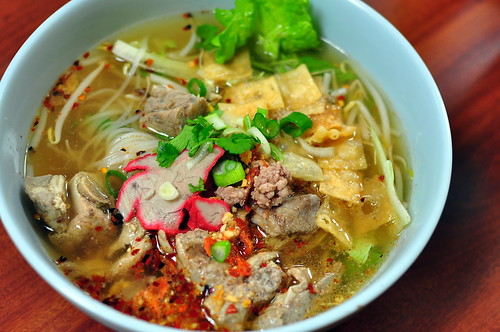 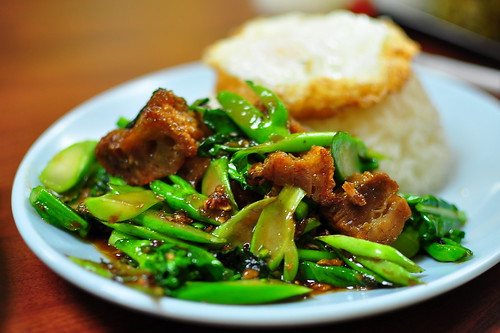 At the suggestion of the lovely Ms. Barbara Hansen, we also ordered khao kanah mu grob, rice with Chinese broccoli, crispy pork, and a fried egg. The sweetly marinaded pork was just what we needed after two chili-laced soups and one very spicy salad. The abundance of garlic and the meat’s unique texture really made this dish fantastic.