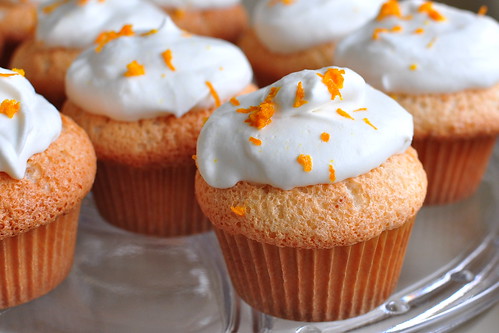 The Astronomer recently made a lovely batch of lemon bars that resulted in seven egg whites chilling in the fridge. In the past, I’ve whipped up Pavlovas, coconut macaroons, and meringue cookies to avoid wasting perfectly good whites. This time around, I wanted something different—something substantial and with a bit more oomph.

The vote for angel food cupcakes excited me the most because I initially wanted to make an angel food cake but couldn’t due to my lack of a proper tube pan. Making cupcakes meant that I could have my cake and eat it too!

I paired whipped cream with these light and airy citrus cupcakes because a traditional butter cream would’ve weighed down the delicate package. And just in case you’ve got a lot of whites lying around, this recipe easily doubles.

Preheat oven to 350F. Very lightly grease a 12-cup muffin pan (skip this step if your pan is nonstick).

In a small bowl, sift together cake flour and 1/4 cup of sugar.

In a large bowl, beat room-temperature egg whites until foamy, then add in cream of tartar and salt. Gradually add in the remaining 1/2 cup of superfine sugar while the mixer is on high speed, beating the egg whites to soft peaks. Blend in vanilla extract.

Fold in flour mixture, adding it in two or three additions, and fold in orange zest when all other ingredients have been incorporated.

Divide evenly into prepared muffin tins, filling them just about to the top.

Bake for 16-18 minutes, until tops are golden brown and the cakes spring back when lightly touched.

Cool completely before using a butter knife to release the cupcakes from the muffin pan.

In a large mixing bowl, place the whipping cream, vanilla extract, and sugar and stir to combine. Cover and chill the bowl and wire whisk in the refrigerator for at least 30 minutes. When chilled, beat the mixture until stiff peaks form. Garnish with additional orange zest if desired.