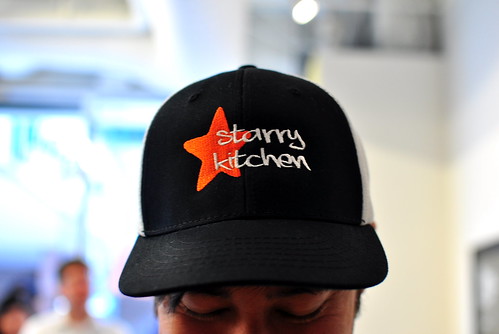 Walking through the doors of the new Starry Kitchen late last week, the first thing I noticed was Nguyen Tran’s smiling face. The line of worker bees was stretched almost out the door, and in the midst of it all was a cool, calm, and collected Nguyen explaining the drill and moving the crowd along. It’s this kind of genuine interaction and customer care that makes Starry Kitchen really special. That, and the interesting and fresh food that Nguyen’s wife Thi whips up in the kitchen. 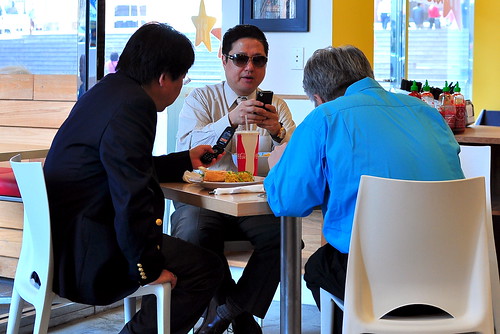 Starry Kitchen, which is named after Thi’s favorite Hong Kong soap opera, is located in the courtyard of the California Plaza building. The place is only open for lunch at the moment, but Thi and Nguyen hope to extend service through dinner on Thursdays and Fridays in the future.

Whereas the NoHo crowd was mostly comprised of media-savvy mavens, the one downtown is made up of business-minded professionals. It’s been years since I’ve been a part of the rat race, so it was a treat to people gawk watch. 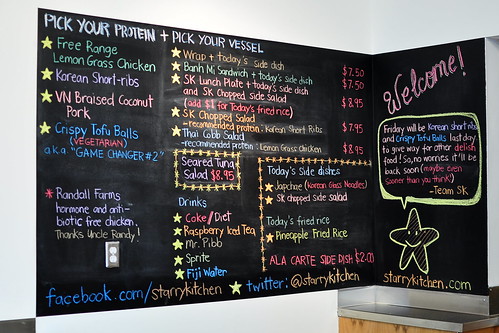 “Pick your protein, then pick your vessel,” stated the adorable chalkboard menu. Most lunch combos also include a side of something carb-related. The menu rotates each week, so I was stoked to drop in when both the beloved crispy tofu balls and the Vietnamese braised coconut pork were on offer. 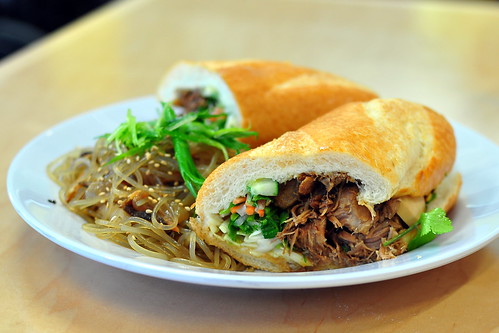 The Astronomer ordered the Vietnamese braised coconut pork in a banh mi sandwich with a side of Korean japchae noodles ($7.50). The pork was shredded, moist, and heavy on ginger, while the bread was soft yet sturdy. The bevy of veggies inside were snappy and lightly pickled. The Astronomer thought that the sandwich was very tasty, but wouldn’t call it a proper banh mi due to the mild veggies.  We both agreed that the pork could’ve used a heavy dose of fish sauce and plenty more chunks of blubbery fat—two essential components of the classic Vietnamese dish thit kho. The noodles were more than competent. 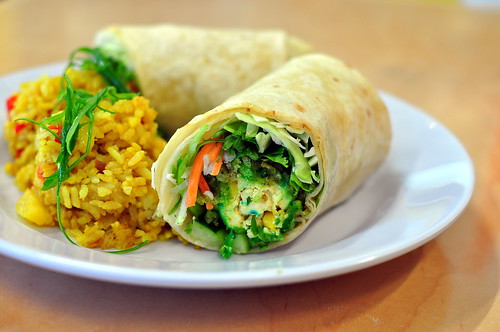 I ordered the crispy tofu balls in a wrap with a side of pineapple fried rice ($7.50). I wasn’t sure what to expect as I bit into the fluorescent green orb, but the flavors and textures were totally to my liking. Little kernels of corn provided a touch of sweetness and texture to the balls. The wrap and its various fresh and healthy components reminded me of the macrobiotic fare I downed at M Cafe de Chaya not too long ago. I loved the curry flavor of the pineapple fried rice.

I usually brown-bagged it during my days running in the Philadelphia rat race, but then again, my choices included the yawn-inducing Au Bon Pain and a local chain called Marathon Grill. If Starry Kitchen moved in or around my building, I’d jump on it.